I tried a variety of things this week. I may have misinterpreted  the concept of "parallel" lines. Some of my stitches are sewen on the fold, others are simply repeated lines of parallel stitching.  All in all a good variety of parallel line results.
For this week's posting I had fun using an old friend to prepare shibori stitches for dyeing.
I dug out my old smocking pleater that I used for making little garments for the young ones in my life. It draws up perfectly even rows that can be stitched over to create beautiful designs. I drew up samples on the straight of grain and on the bias. I drew up and removed some of the stitching lines to change the spacing. It created an exciting canvas to dye. 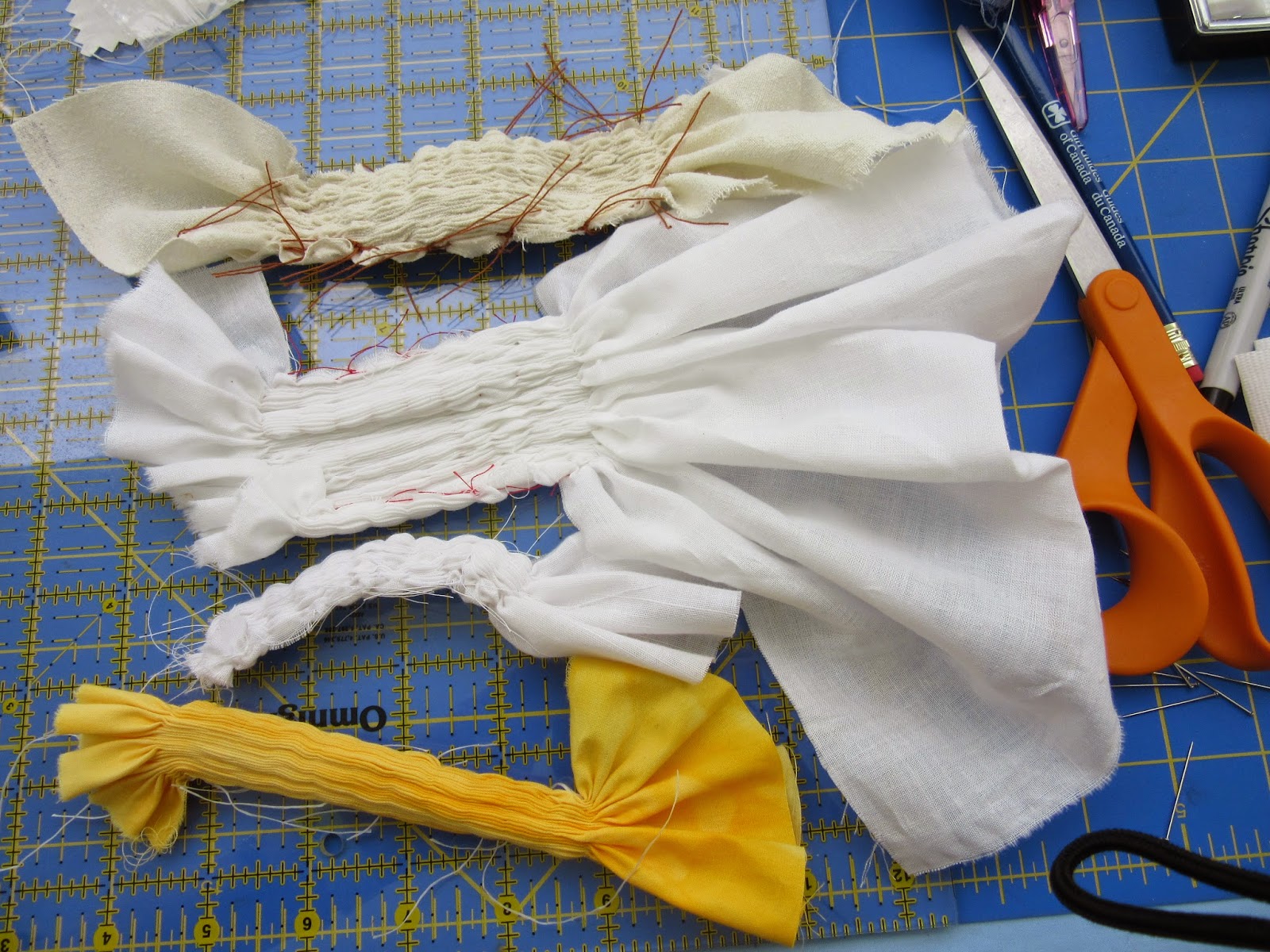 Top to bottom I have:
a. diagonal drawn work on raw silk
b. lightweight cotton muslin
c. cotton and linen blend
d. on previously pre-dyes fabric 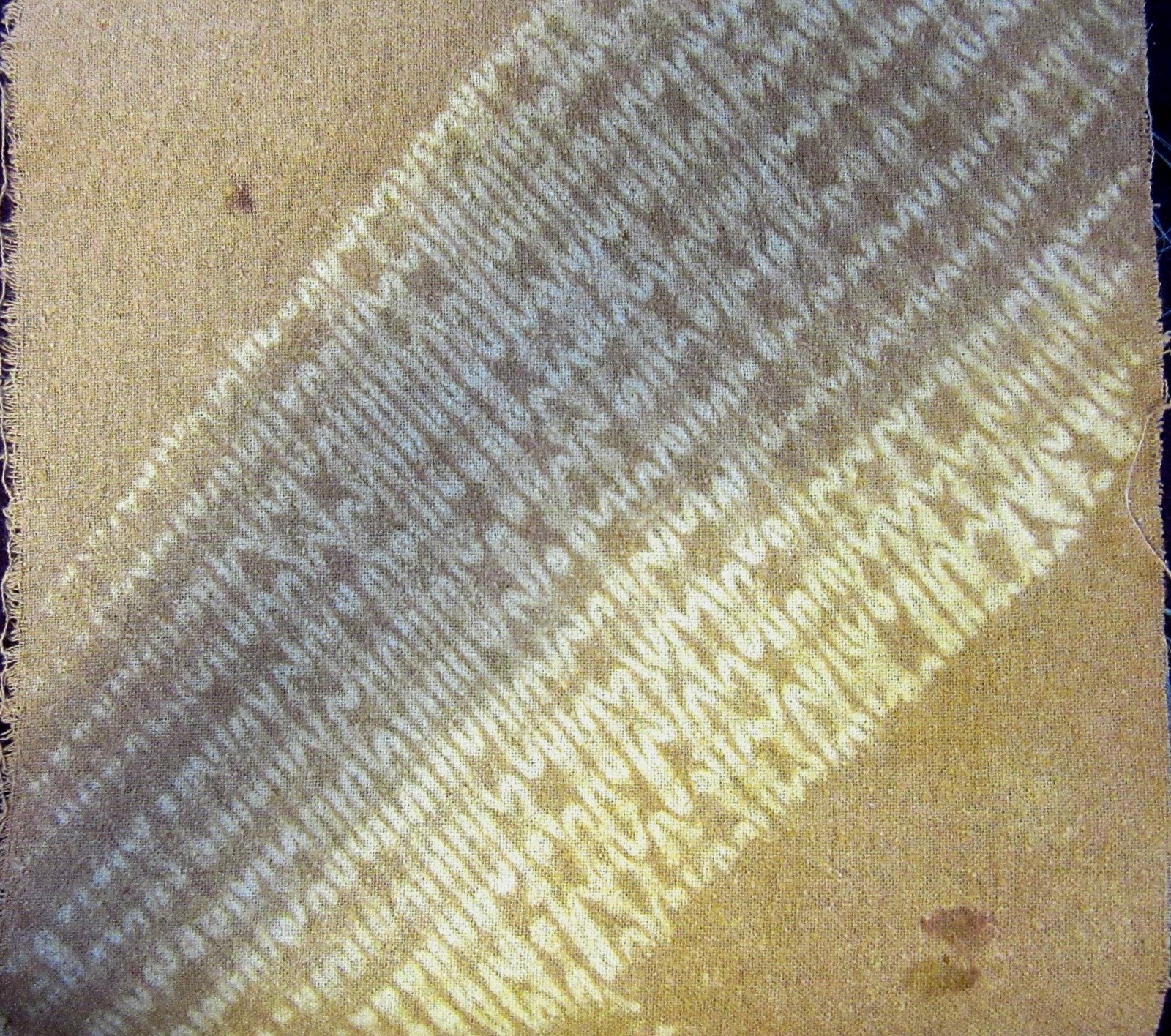 While I used a medium strength dye, It turned out rather wimpy with just an hour+ soak in the dye bath.

SAMPLE 1b:
The muslin flooded with the dye and left very little by way of markings.
I refolded it in thirds and stitched it again using four horizontal lines and parallel bias lines. The result of the two techniques gives a different feel to the shibori. Rather undefined. 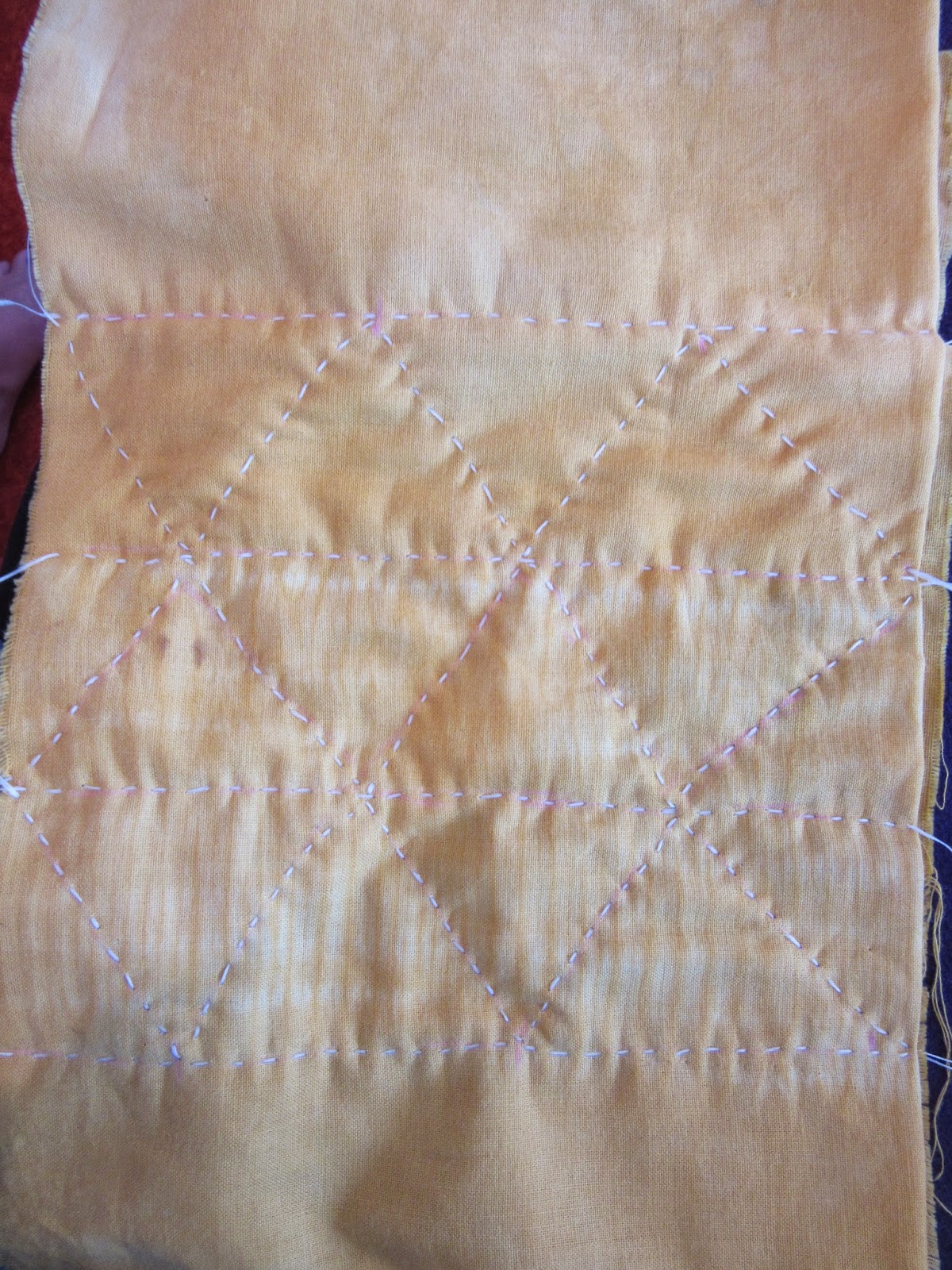 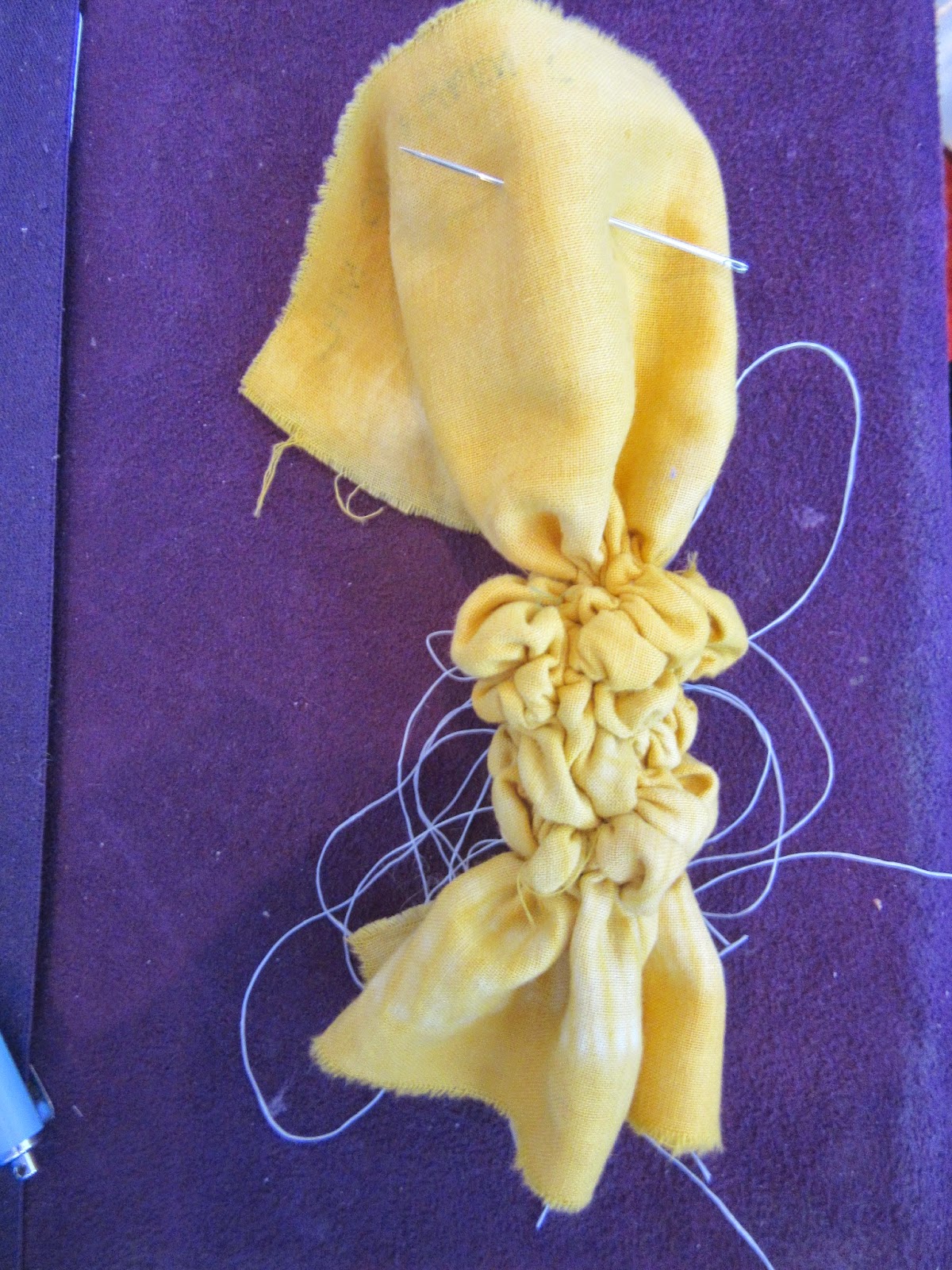 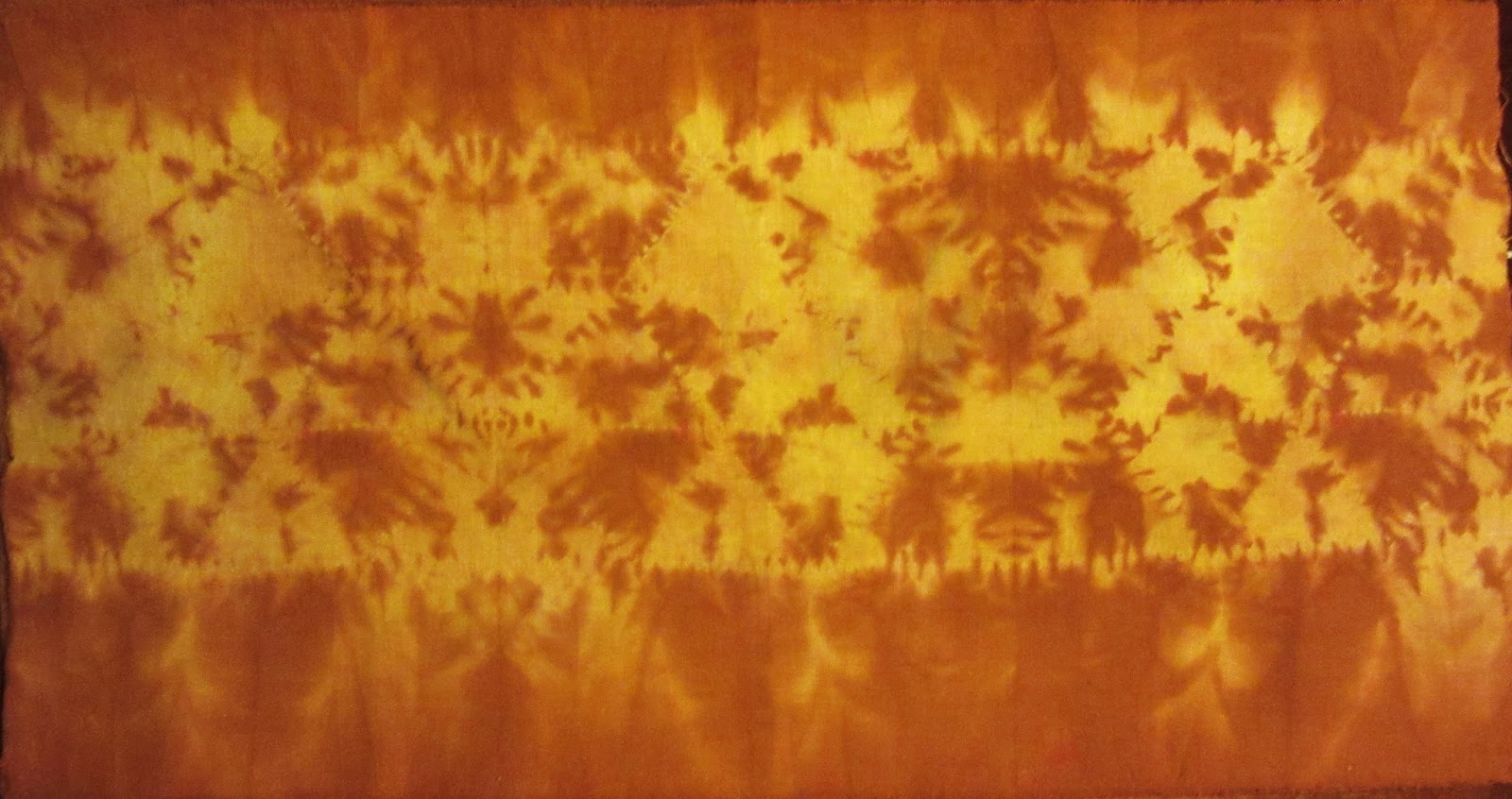 SAMPLE 1c:
This sample was rather wimpy too!. The regular rows give an interesting pattern.
I used a medium strength stormy gray. An hour was too short a time to dye the thicker layers of fabric. 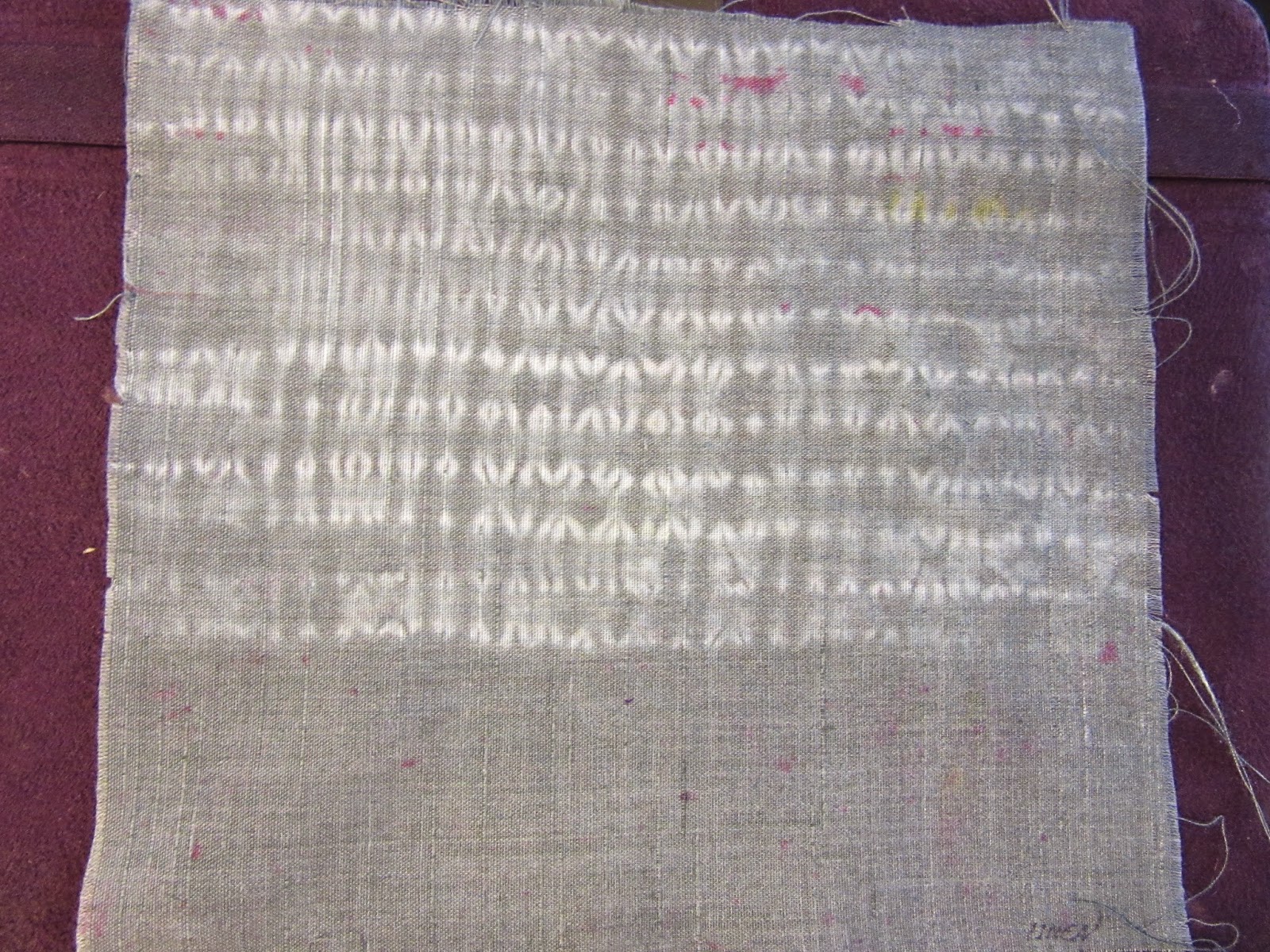 SAMPLE 1d:
The dyeing of a pleated previously dyed fabric gave interesting patterning that will make a nice background piece of fabric. This was my hands down favorite piece of the lot. 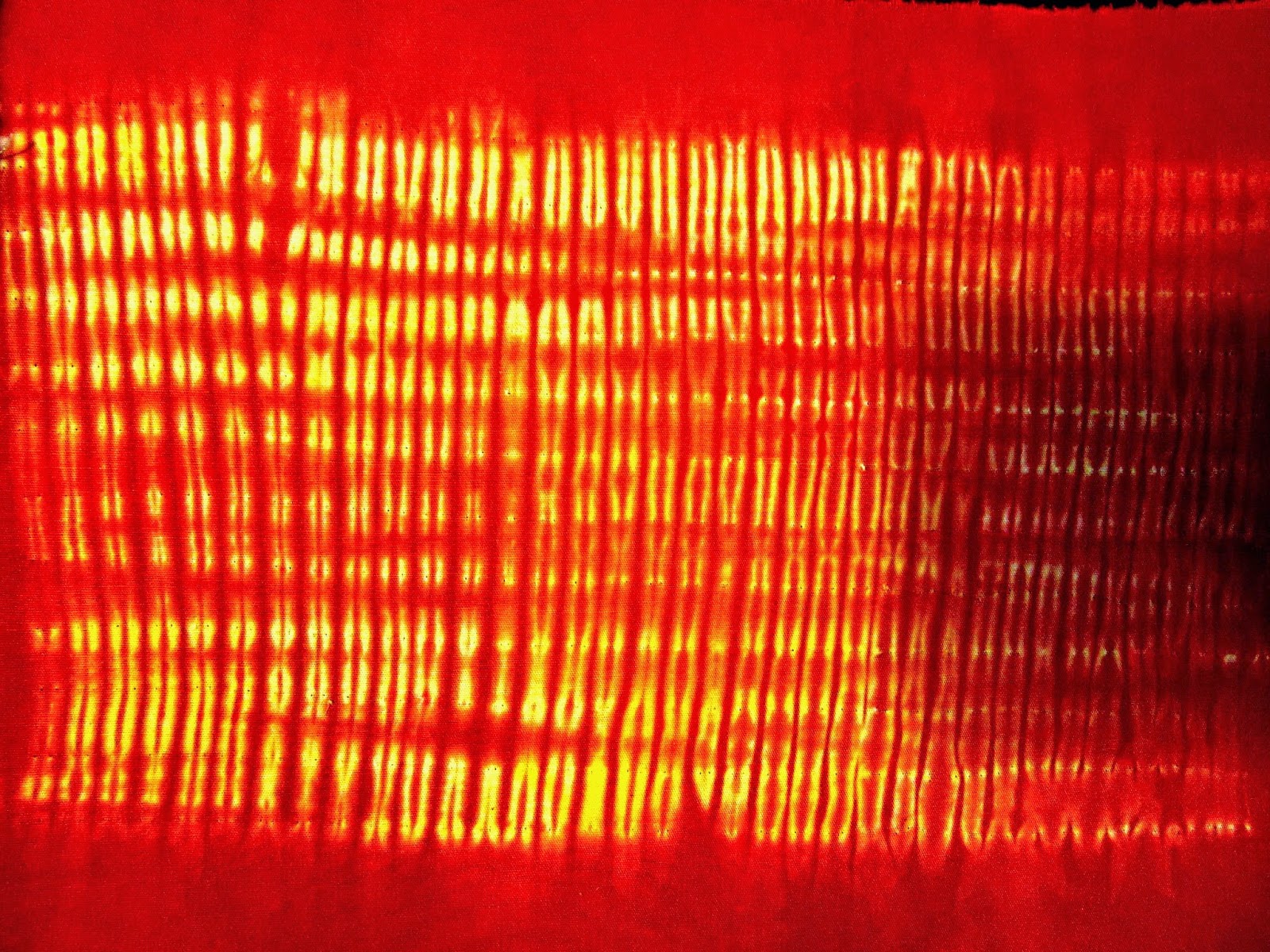 SAMPLE 2:
This sample was drawn up on rayon. Two evenly spaced rows with a larger space between the rows. 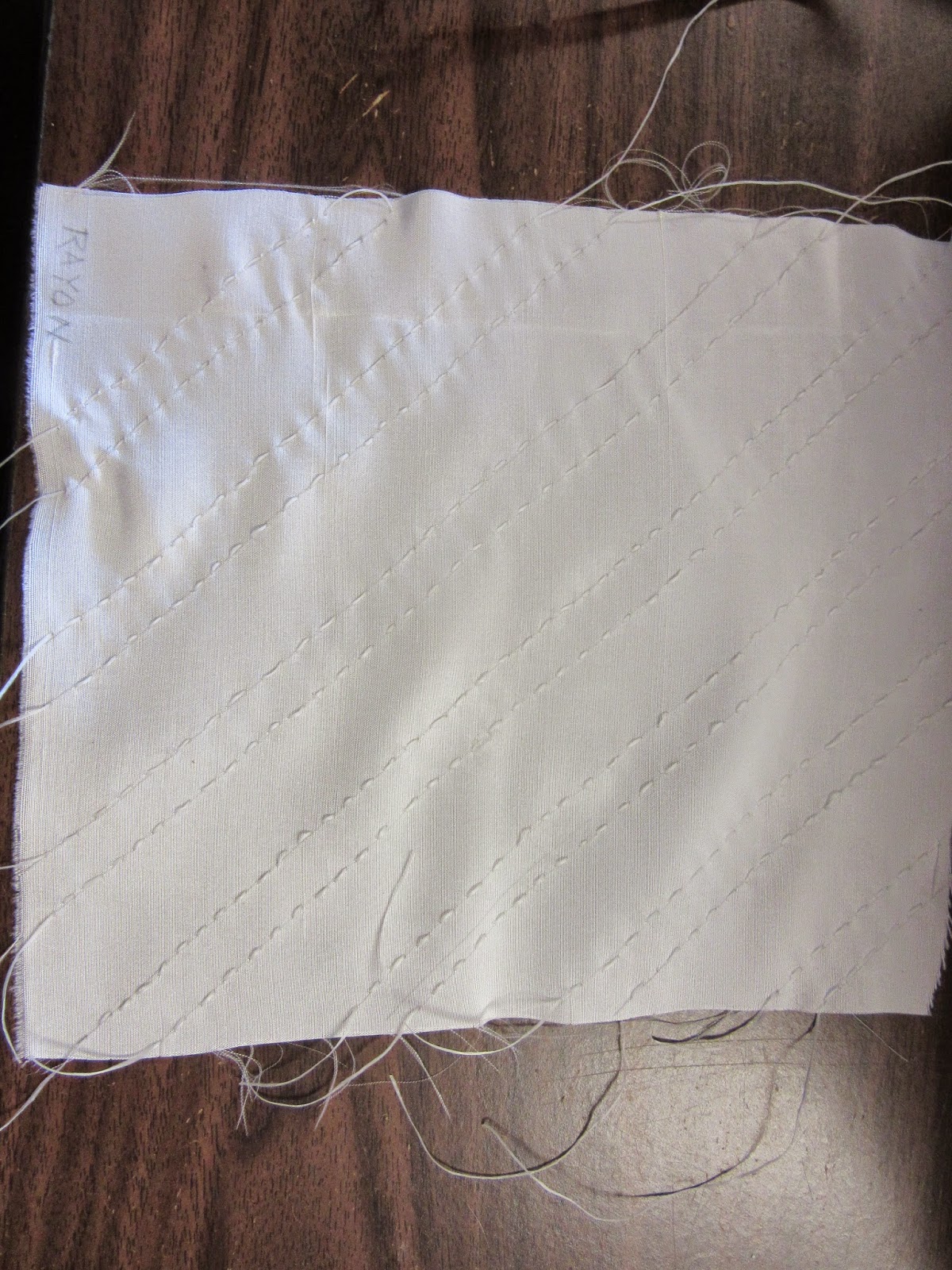 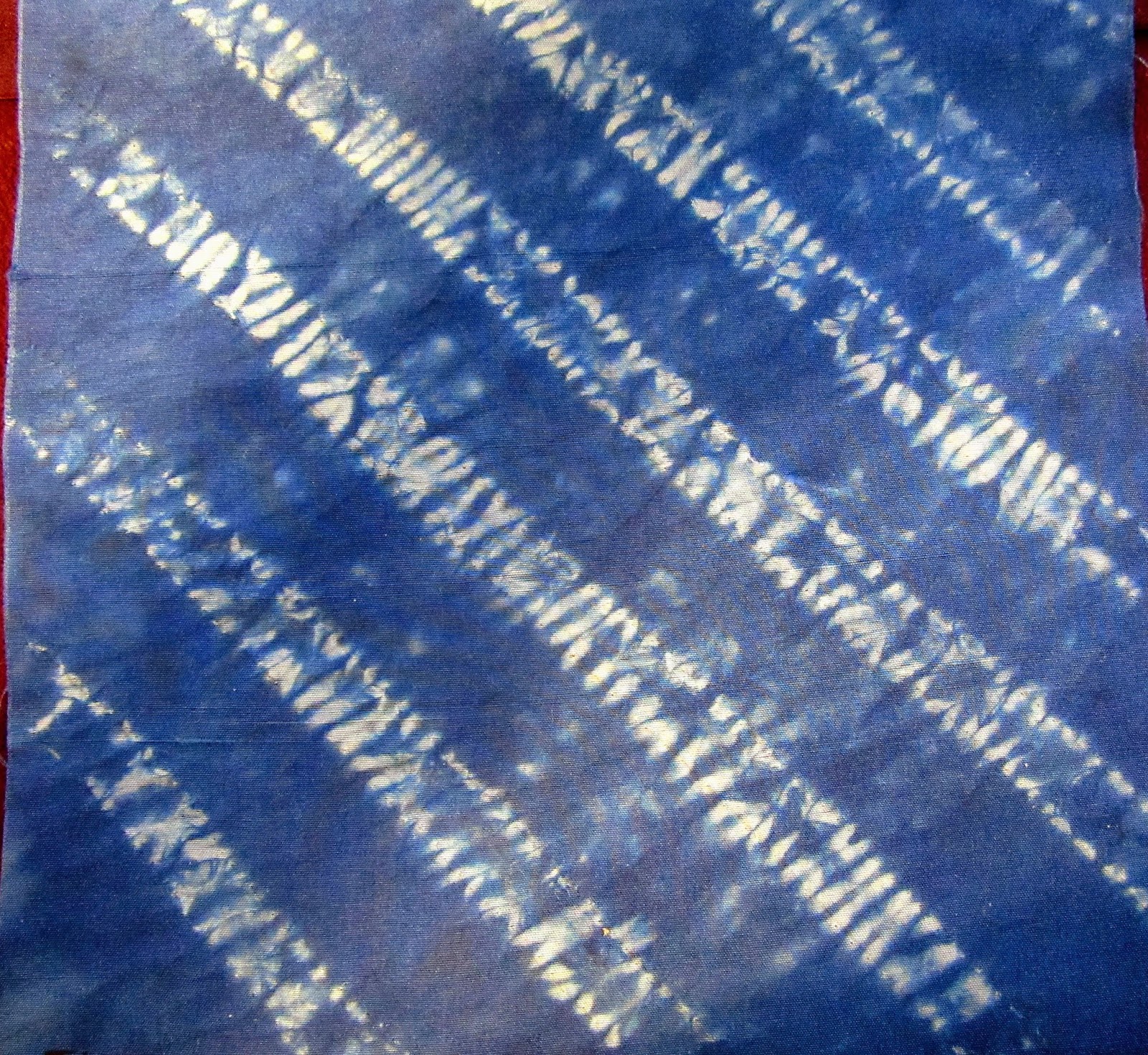 SAMPLE 3:
Here is a case where I was in too much of a hurry to draw up the piece. I never took a shot of the stitching. I stitched upright rows as well as in two directions.
Pimatex is a meaty fabric and should have produced more distinct results. Again, with medium strength stormy gray, an hour was not long enough to let it linger in the dye bath. 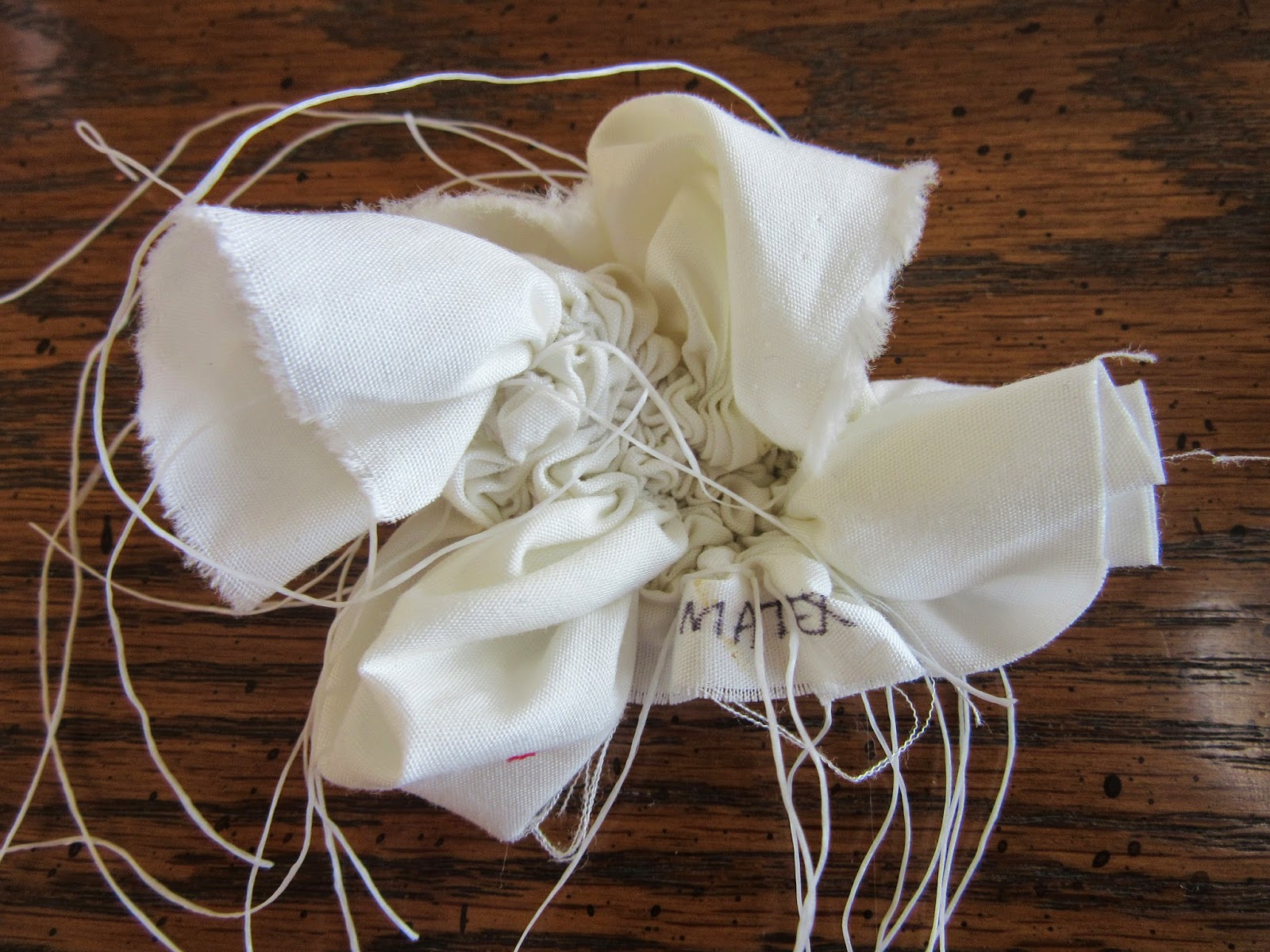 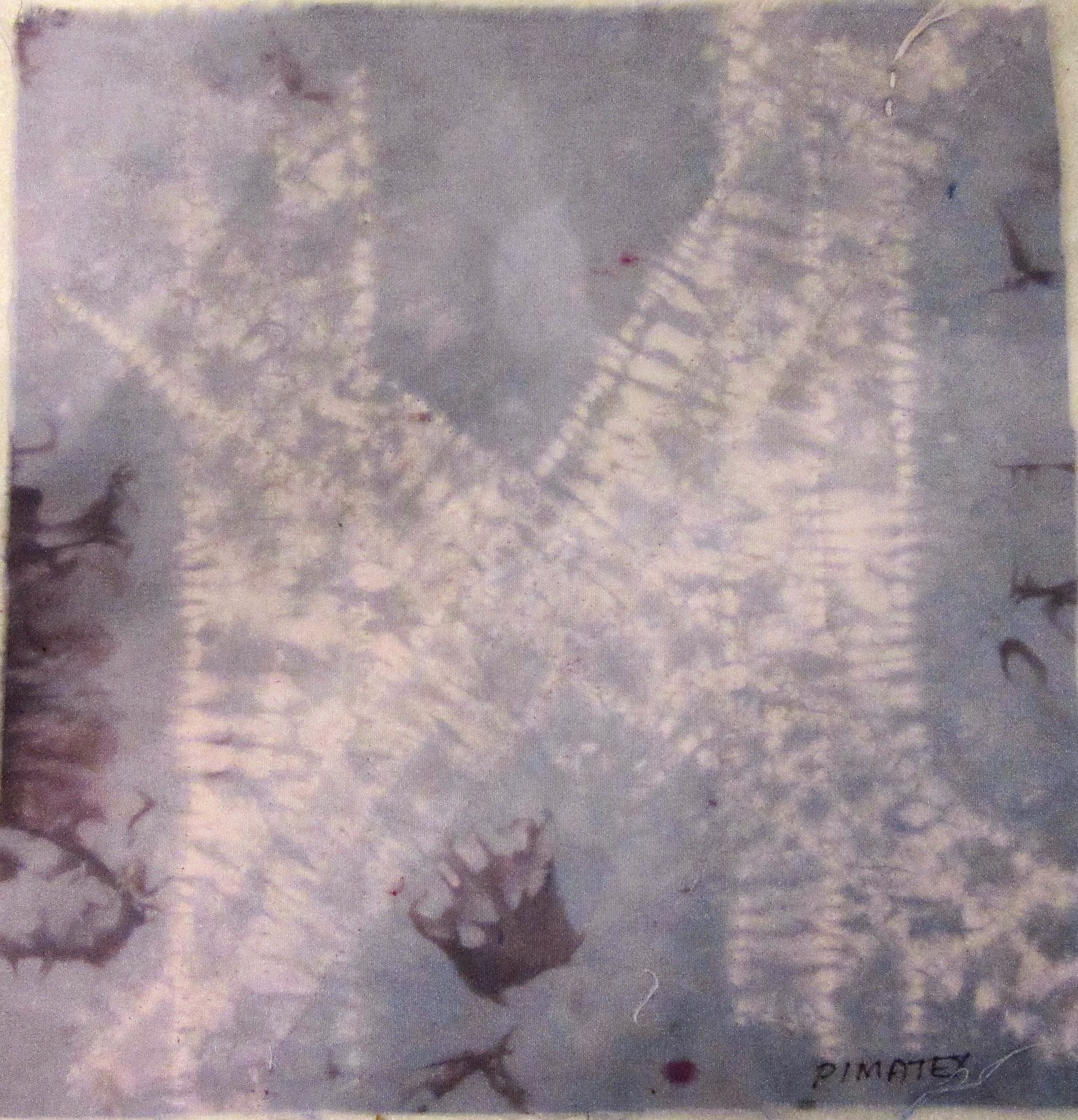 I made curved parallel lines. These were created on a fold. I also did a drawn line of stitching on each side of the fold. 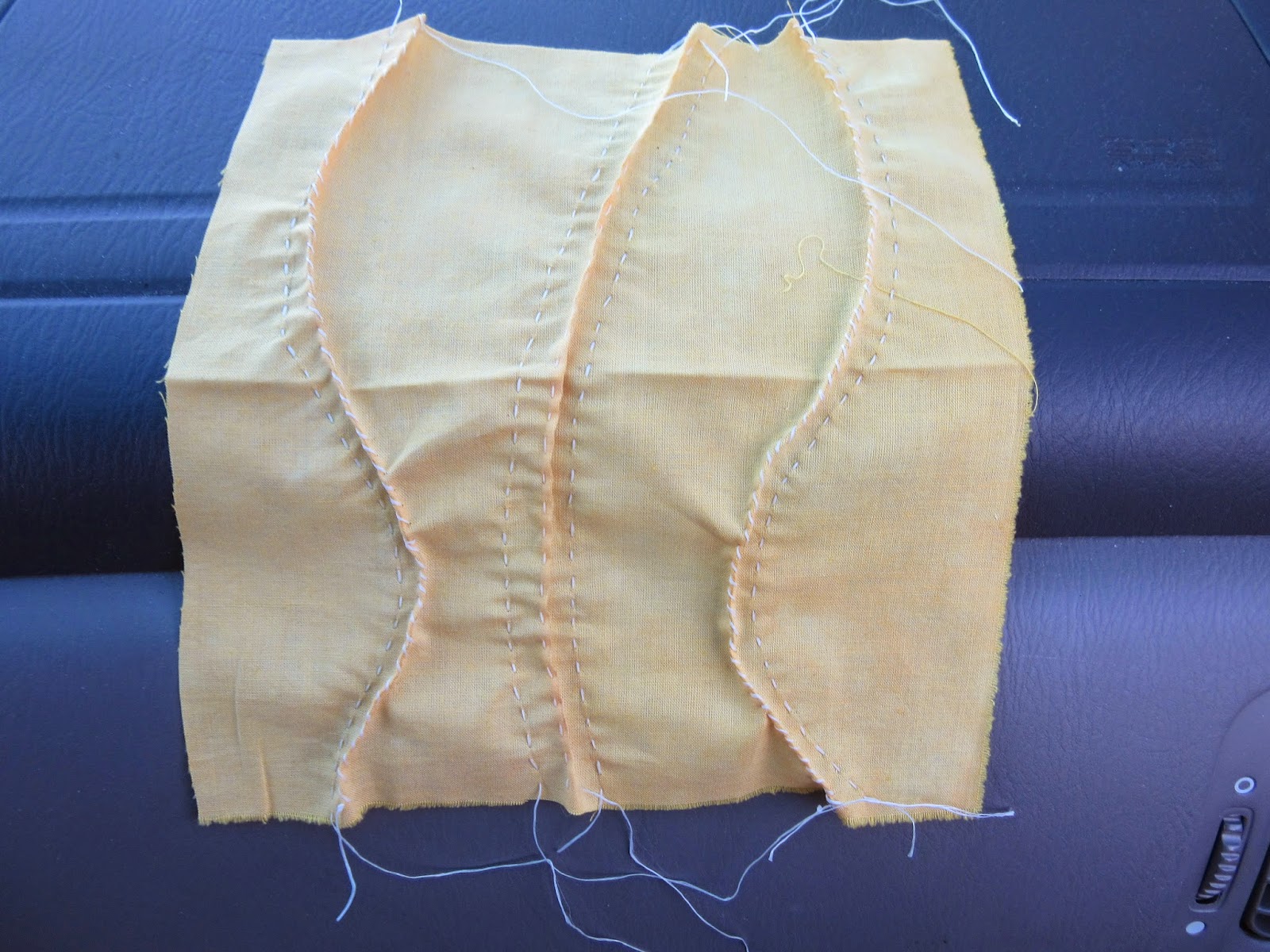 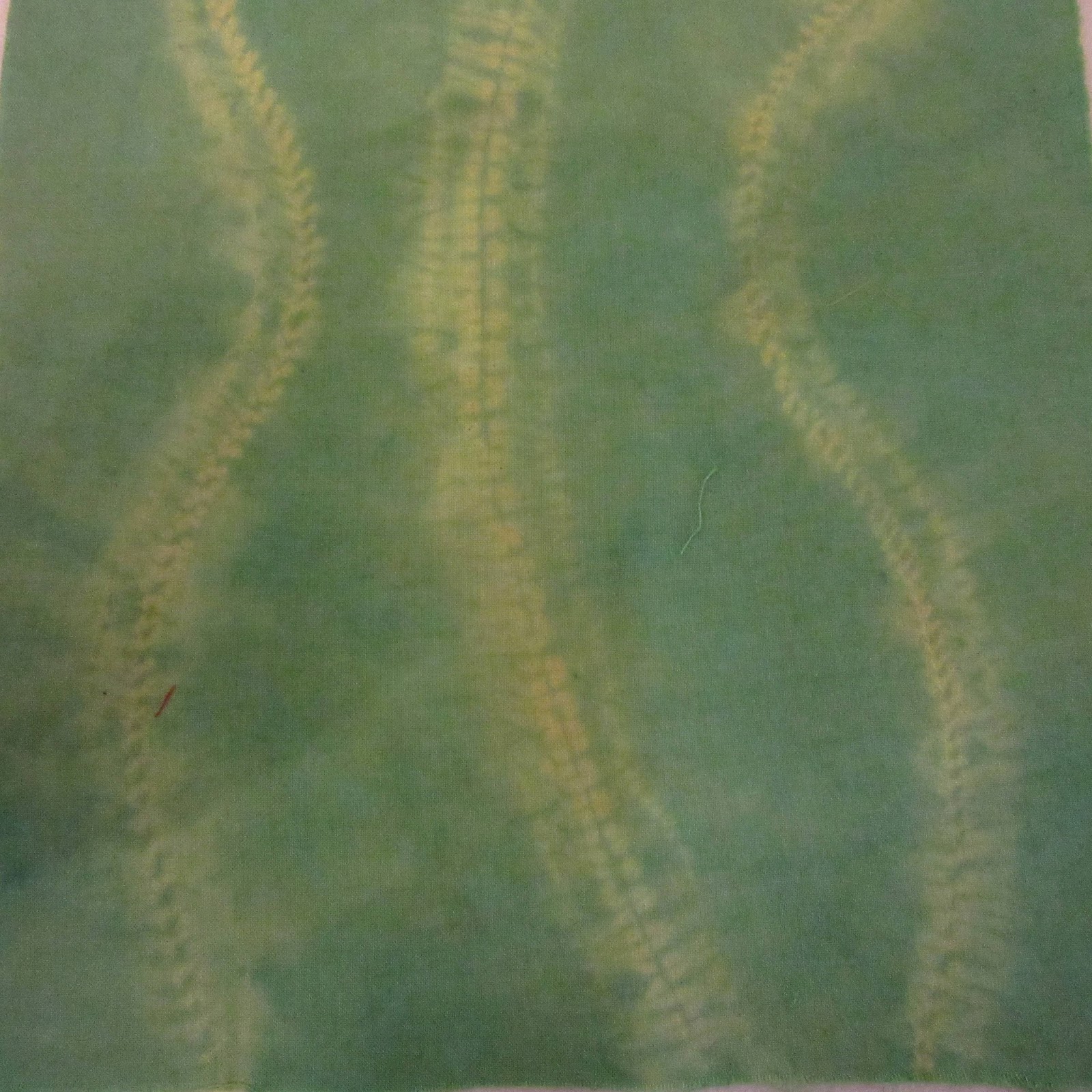 SAMPLE 5:
Again my enthusiasm galloped ahead and I neglected to take a photo of the stitched work prior to drawing it up.
While it is light, the lines show the double lines stitched on folded fabric. 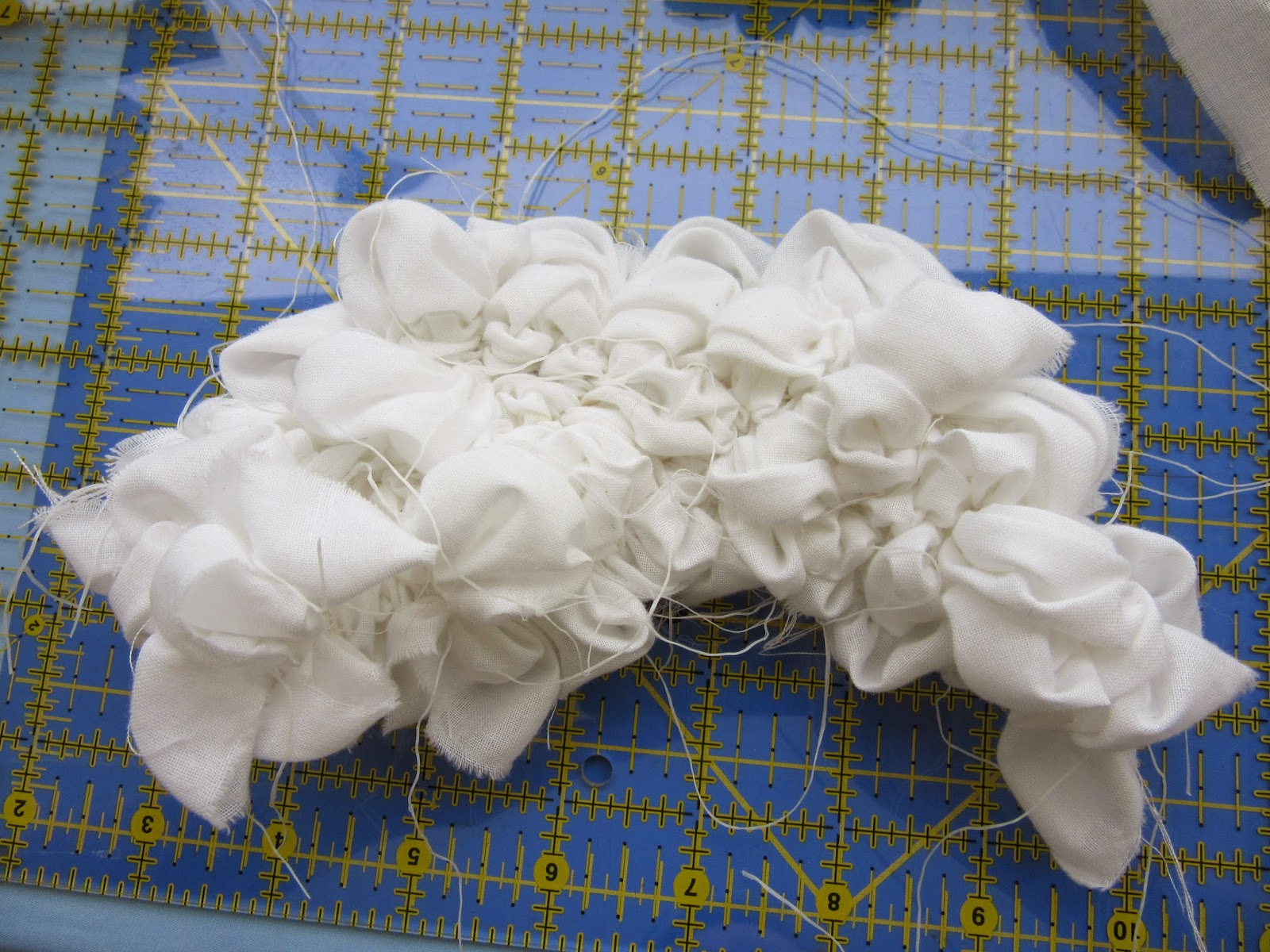 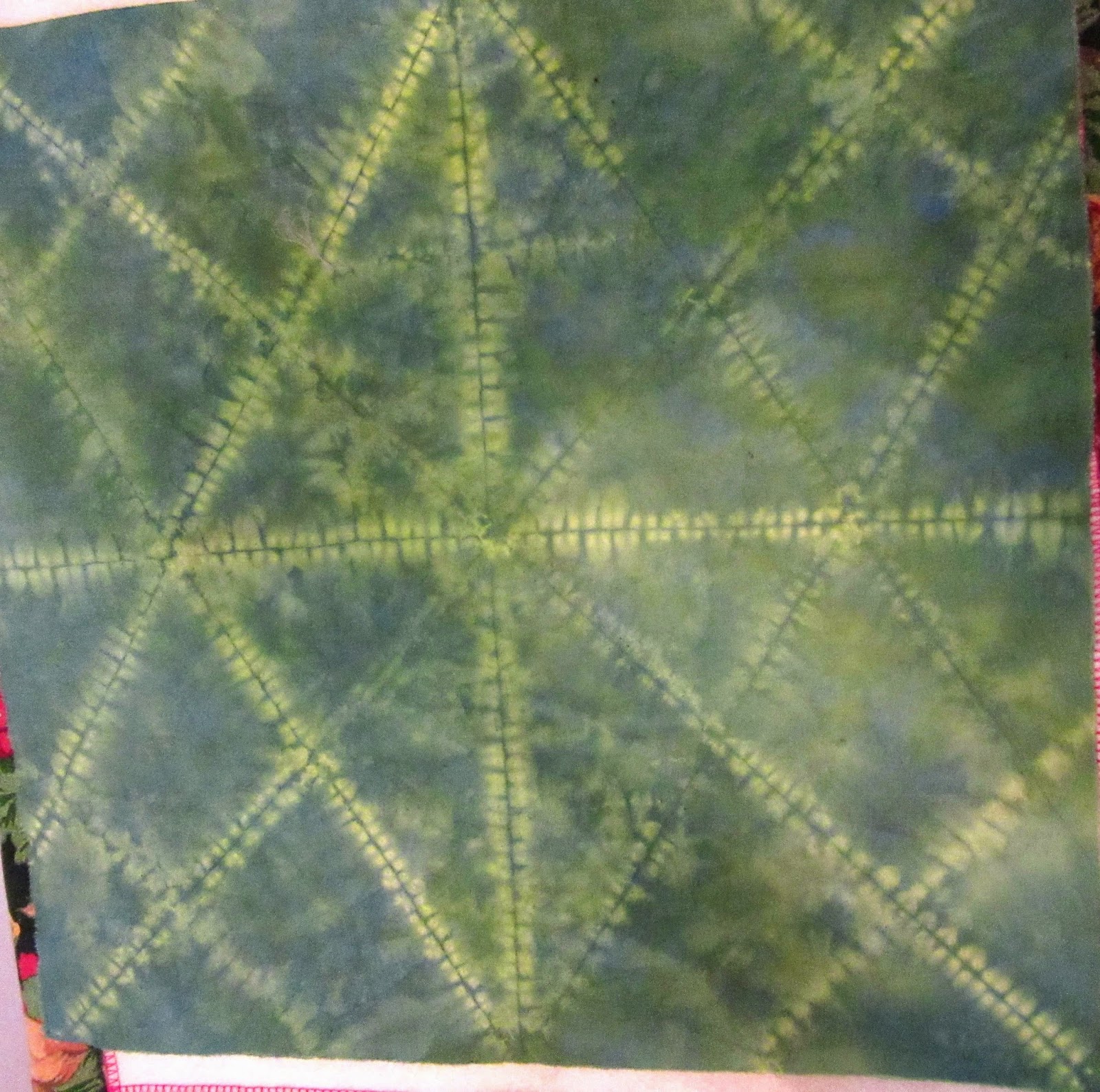 This sample has a wild variety of whip stitch over a fold and running stitch along the fold. This was repeated for the length of the fabric.  The whip stitches were hard to draw up. 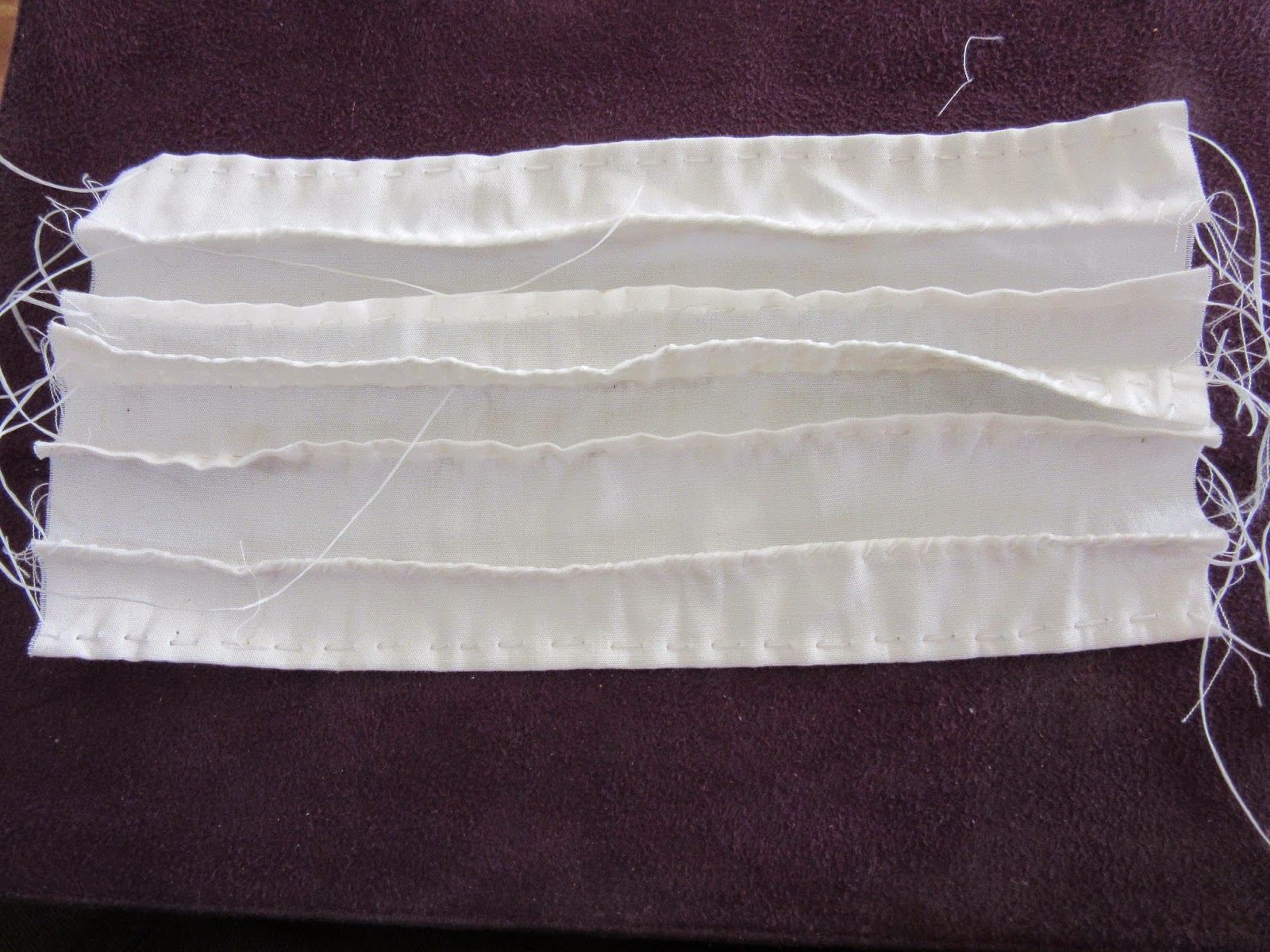 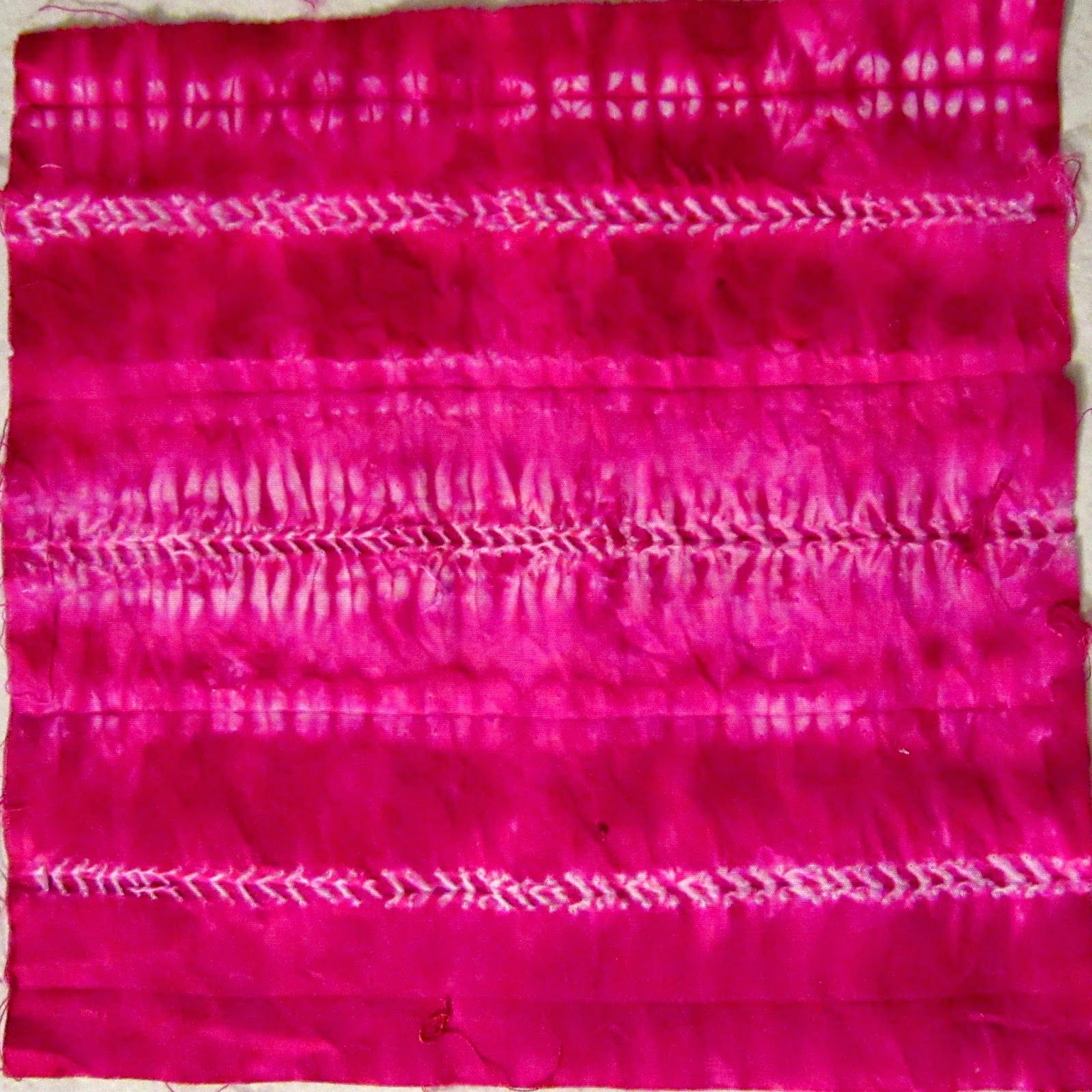 I forgot to draw up the bottom line of stitches.

SAMPLE 7:
The fabric was folded into thirds. This sample was one row stitched with running stitch on the fold (top of sample) and one row of running stitch at the opposite side. In the center are three rows of gently curved parallel lines. 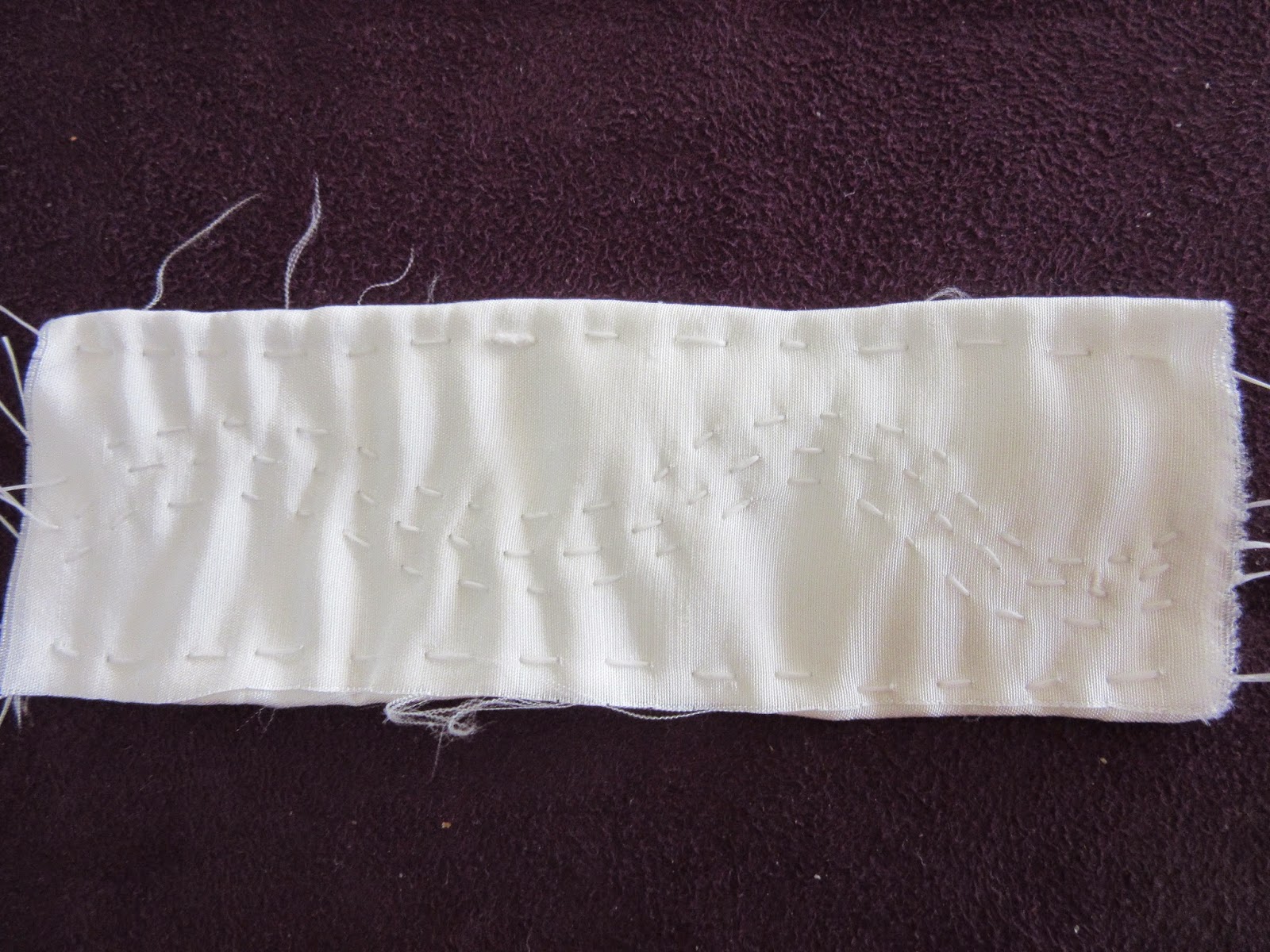 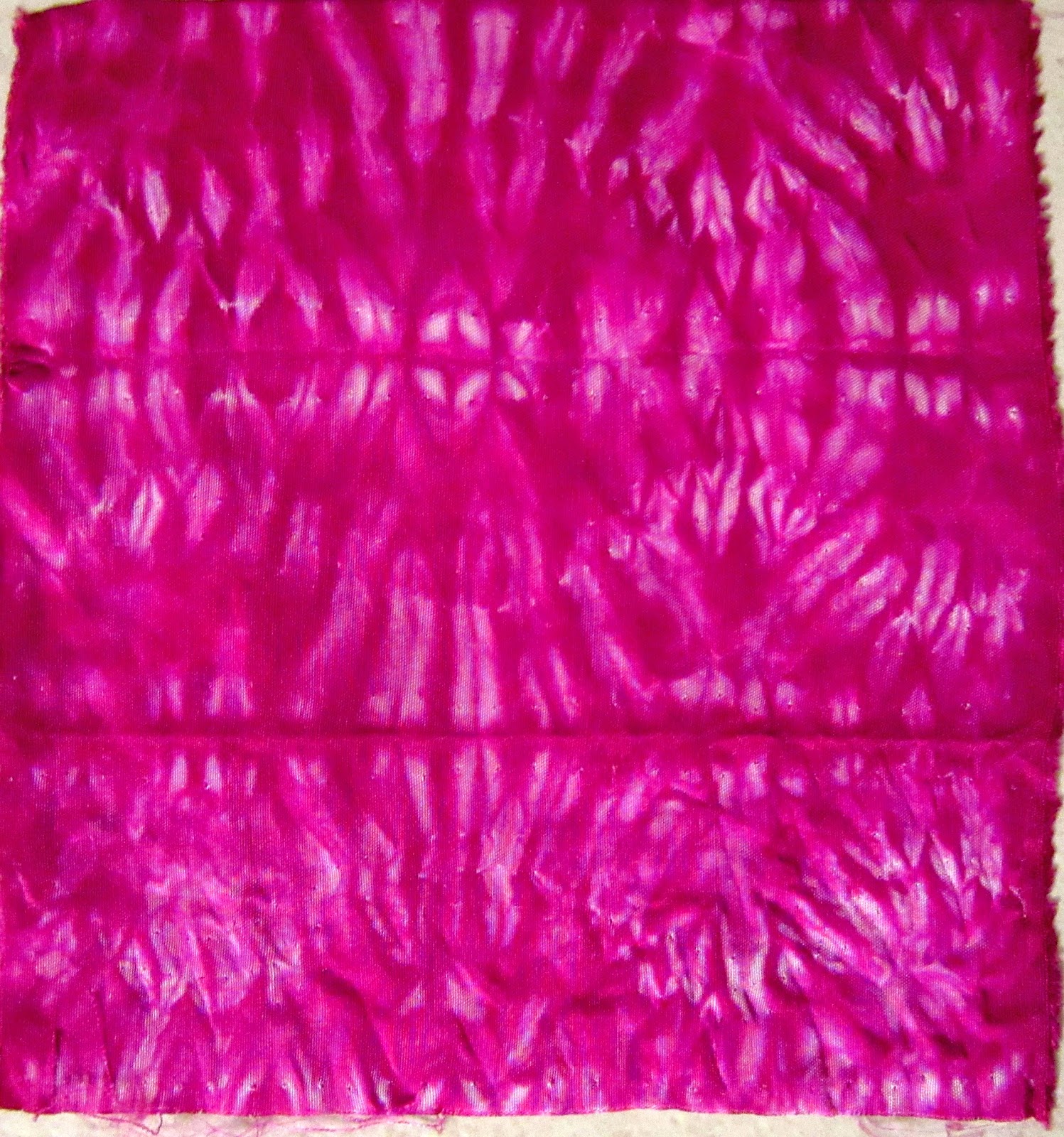 SAMPLE 8:
This sample is similar to an earlier sample with running stitches stitched on the center diagonal fold. Running stitch rows were sewn through the two layers of fabric and finally two single rows of running stitch were stitched over a fold on both sides of the fabric. Silk duplioni gives a nice result as it accepted the dye really well. 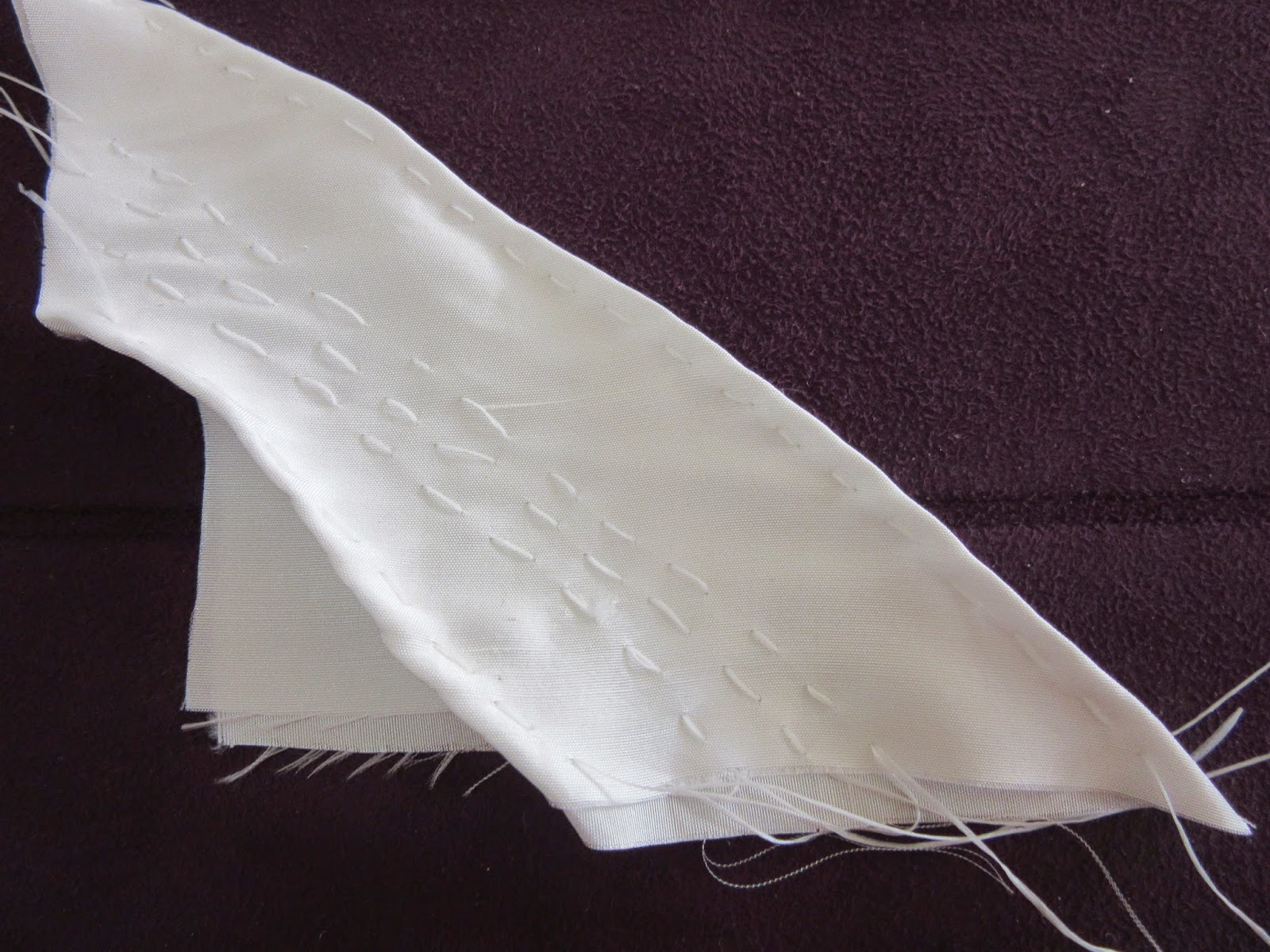 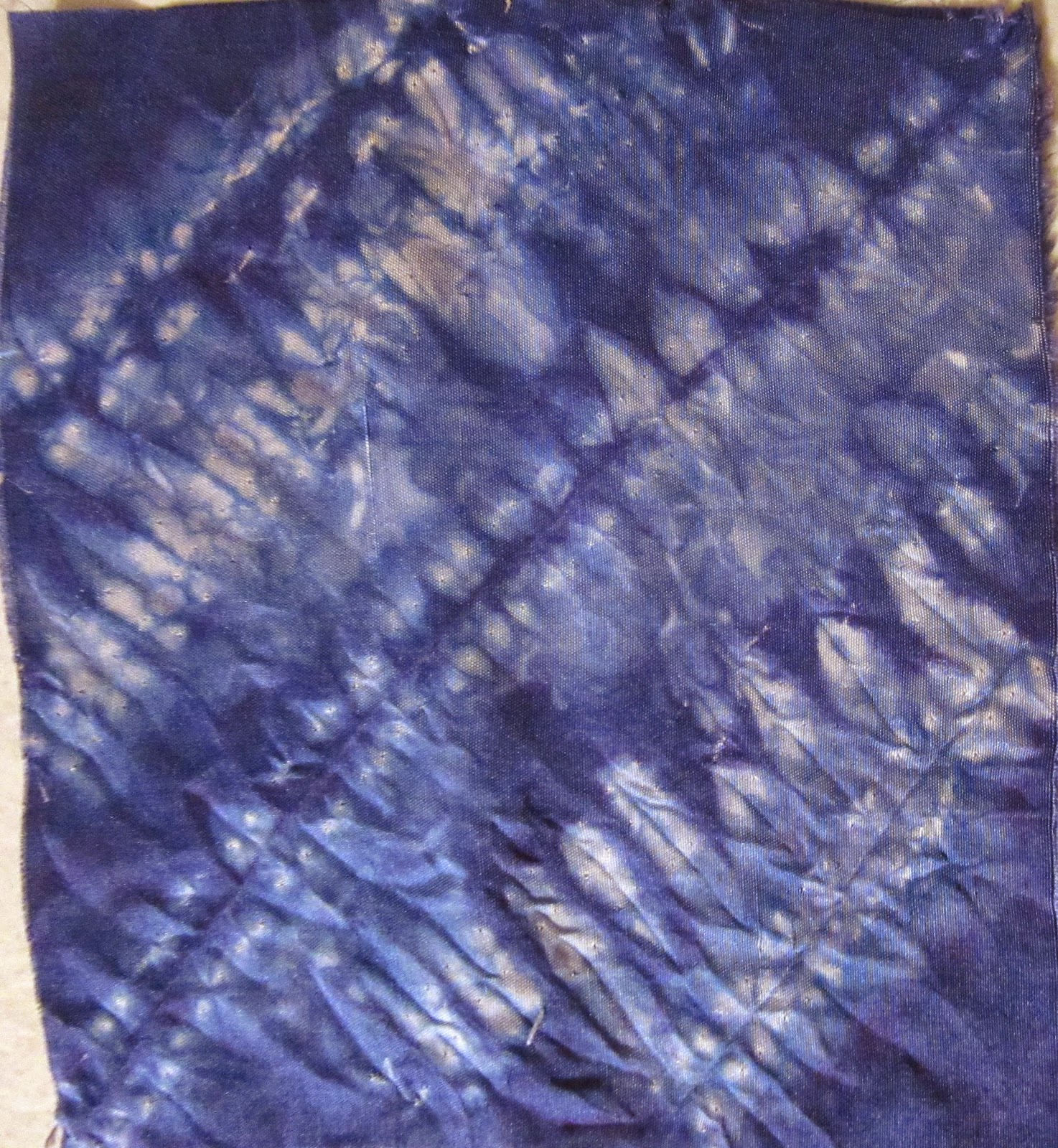 LEARNINGS:
Next week I will return with my last posting with enclosing shapes.
See you then.
Sheila
Posted by Sheila F at 12:02 AM