Hi..it is Marsha from coolquilting again...with a shorter post than last week!! So, if you want more detailed info on the stitching and dyeing processes, check out last Saturday's post.

Most of my curved stitched shibori for this week is based on the traditional Japanese larch or Karamatsu design. This traditional design is stitched on single folds in the fabric to produce alternating rows of concentric circles. When doing the stitching for the larch design, the threads can be either tied off after each set of concentric semicircles, or the threads can be carried across the entire width.

My first modified "larch" design was on a long and narrow piece of silk habotai with blue colorhue dye. For this design I added a single semi-circle in between for fun and only did 1 row of circles: 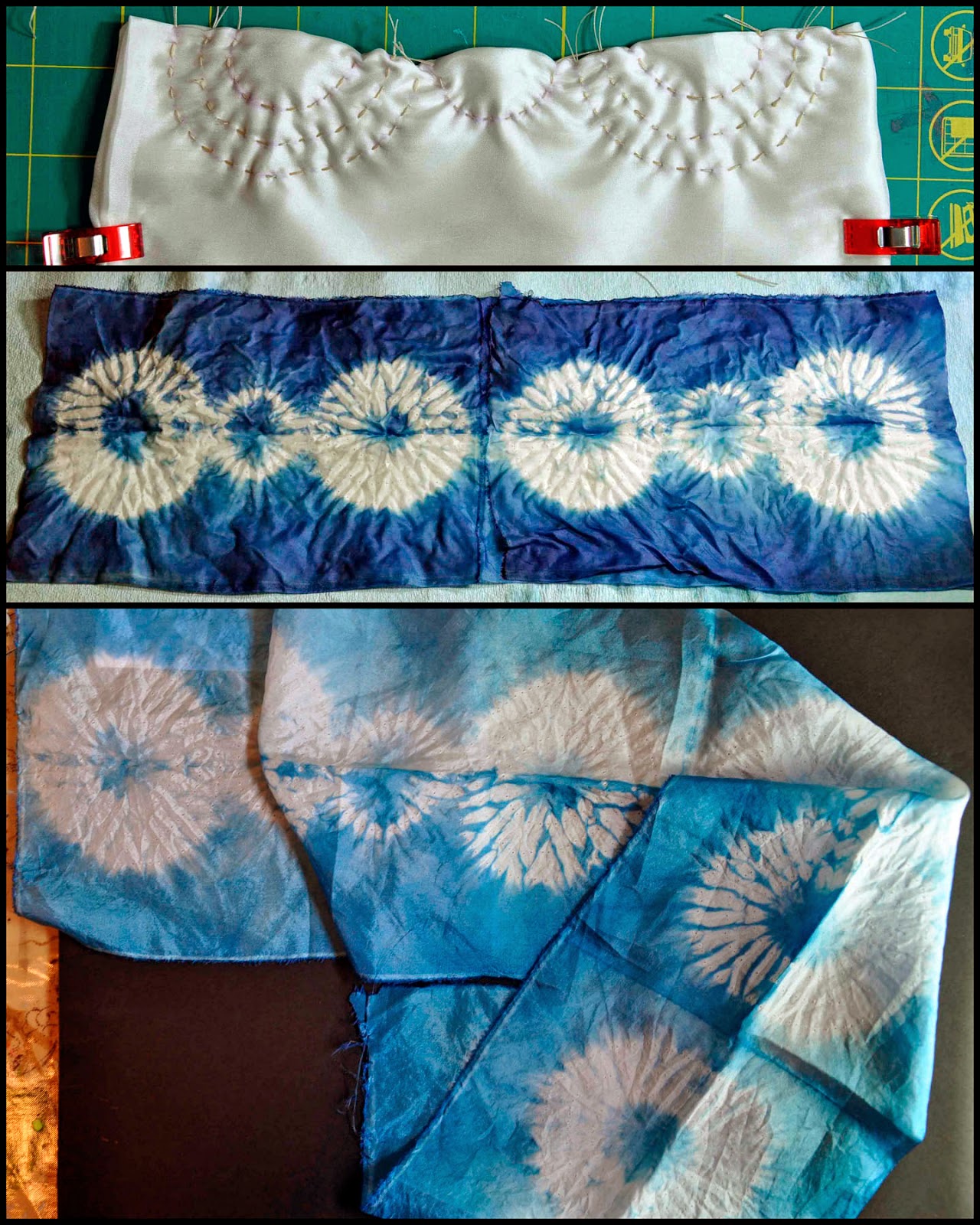 Because of the extra semi-circle, I decided to tie off the threads separately for the 2 sets of concentric circles. An extra twist with my design is that I folded over the habotai many times so the stitching was being done through 8 layers of silk at once...this lead to large differences in dye penetration. The advantage of the 8 layer stitching was that it made for very easy stitching and fast results. The middle photo was taken when the dye was still wet and the scarf is still folded in 2 and the bottom photo shows the dried silk opened up.

A few years ago I did a larch design on cotton with indigo dye(a pre-reduced indigo dye kit from Jacquard). This design was stitched through 4 layers of fabric. For some reason I just can't follow the traditional instructions and do the stitching just through a single fold!! The bottom photo in the collage shows the detail of one of the circles. 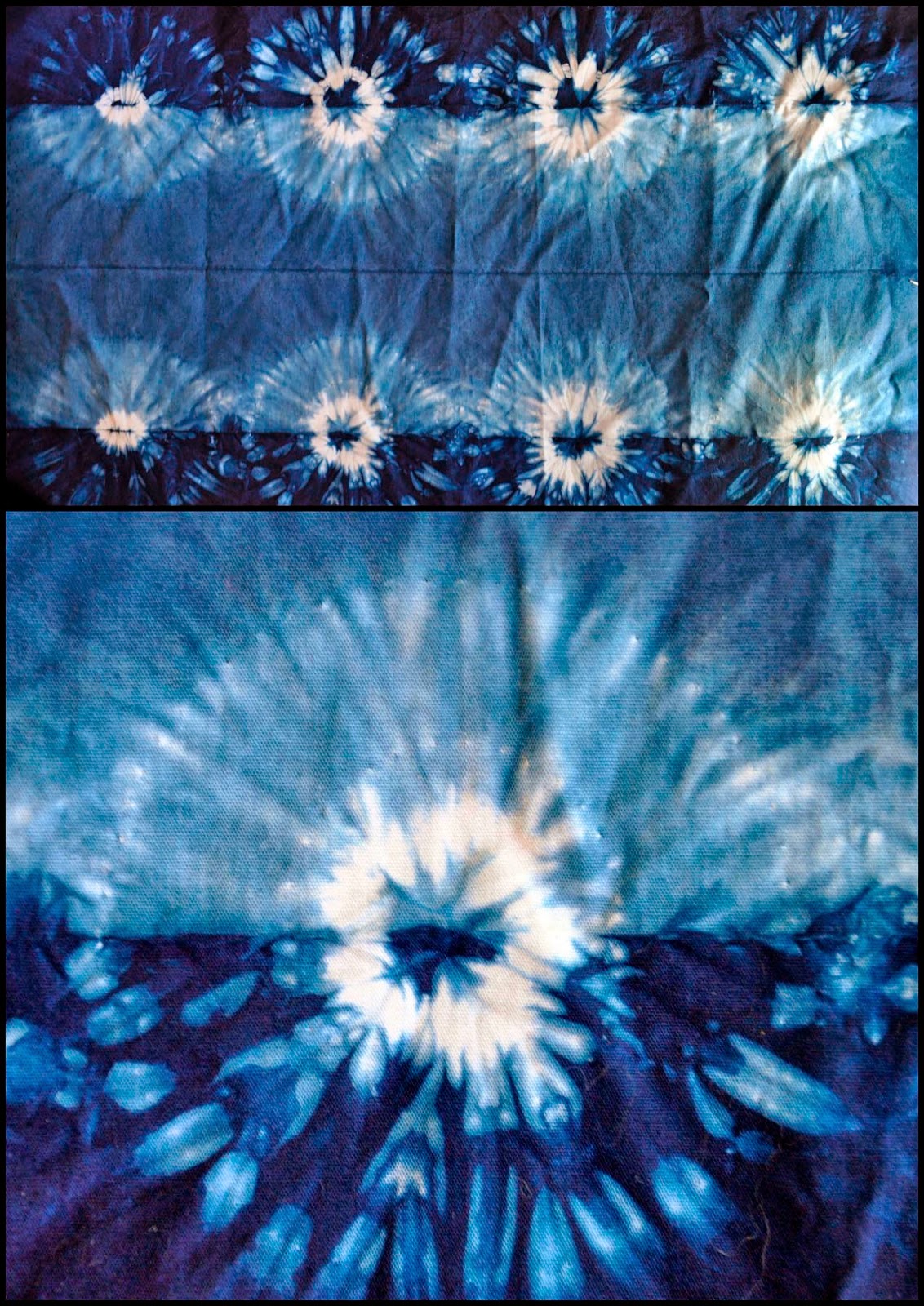 I like the way the indigo is many shades. If I had done 2 separate stitchings on 2 separate folds there would have been much more even dyeing of the center areas of the fabric.

In Janice Gunner's "Shibori for Textile Artists" book, she showed a slightly different larch design which I wanted to try. The design was in semi-circles instead of whole circles, so it had to be stitched on a single layer. I wasn't sure how I should stitch this... to do each semicircle independently or to carry the threads across the width of the fabric. So I tried it both ways: 18 short threads tied off on the top stitch set or just 3 long continuous threads tied off in the bottom set: 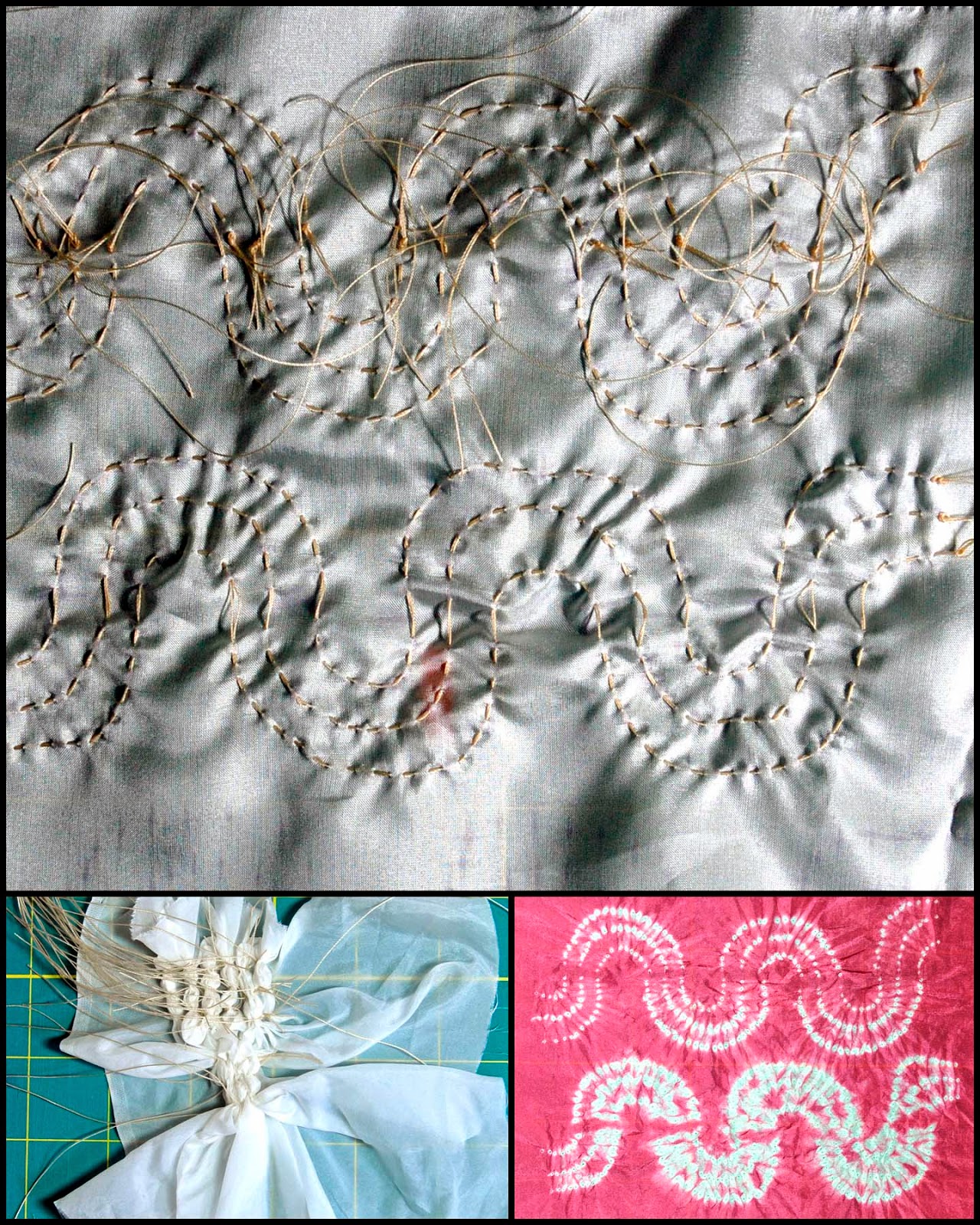 You can see that the upper set with 18 threads did not tie up as tightly as the lower set with just 3 threads. There was much greater/nicer resisting in the lower set with 3 continuous threads and I am happy about that since it is way easier to do.  This first attempt was done on silk habotai with colorhue dye and I want to continue practicing to make the design more consistent.

I also tried some freehand doodling for curved stitches. However, I guessed that the rows were probably too far apart and wouldn't resist very well, so I decided to layer 2 fabrics. I used silk habotai and silk gauze...pinned together for stitching, but ultimately they would be 2 separate pieces: 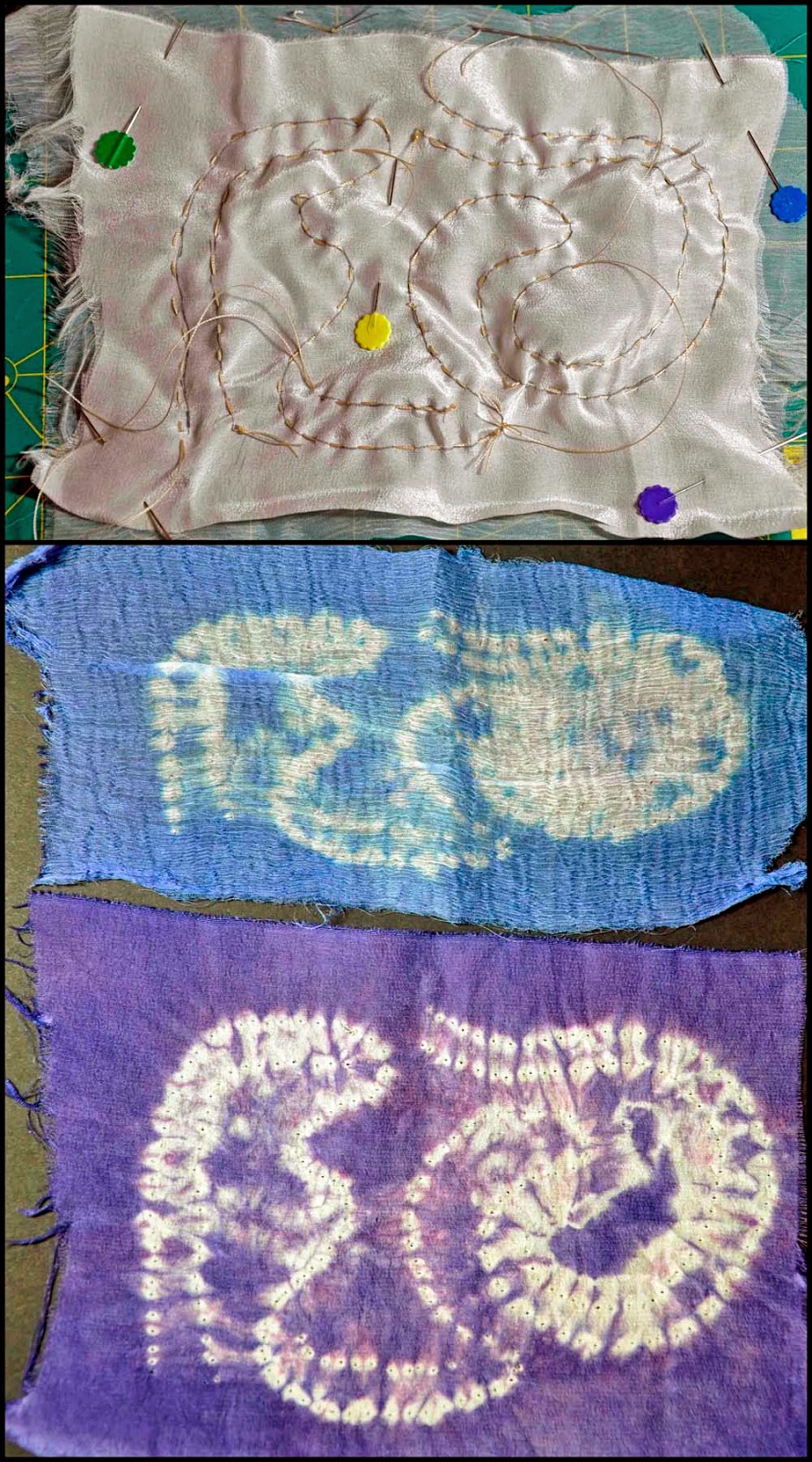 The design is a bit weird since my doodling skills are very minimal. But what I found most interesting was how differently the 2 fabrics dyed!The habotai dyed purple while the gauze dyed blue...I used a blend of blue and red colorhue dyes for this.

I also wanted to try the curved stitching on raw silk. My first piece was a spiral doodle...simply stitched in 2 curved lines on a single layer of fabric and dyed with a very bright yellow/green colorhue dye: 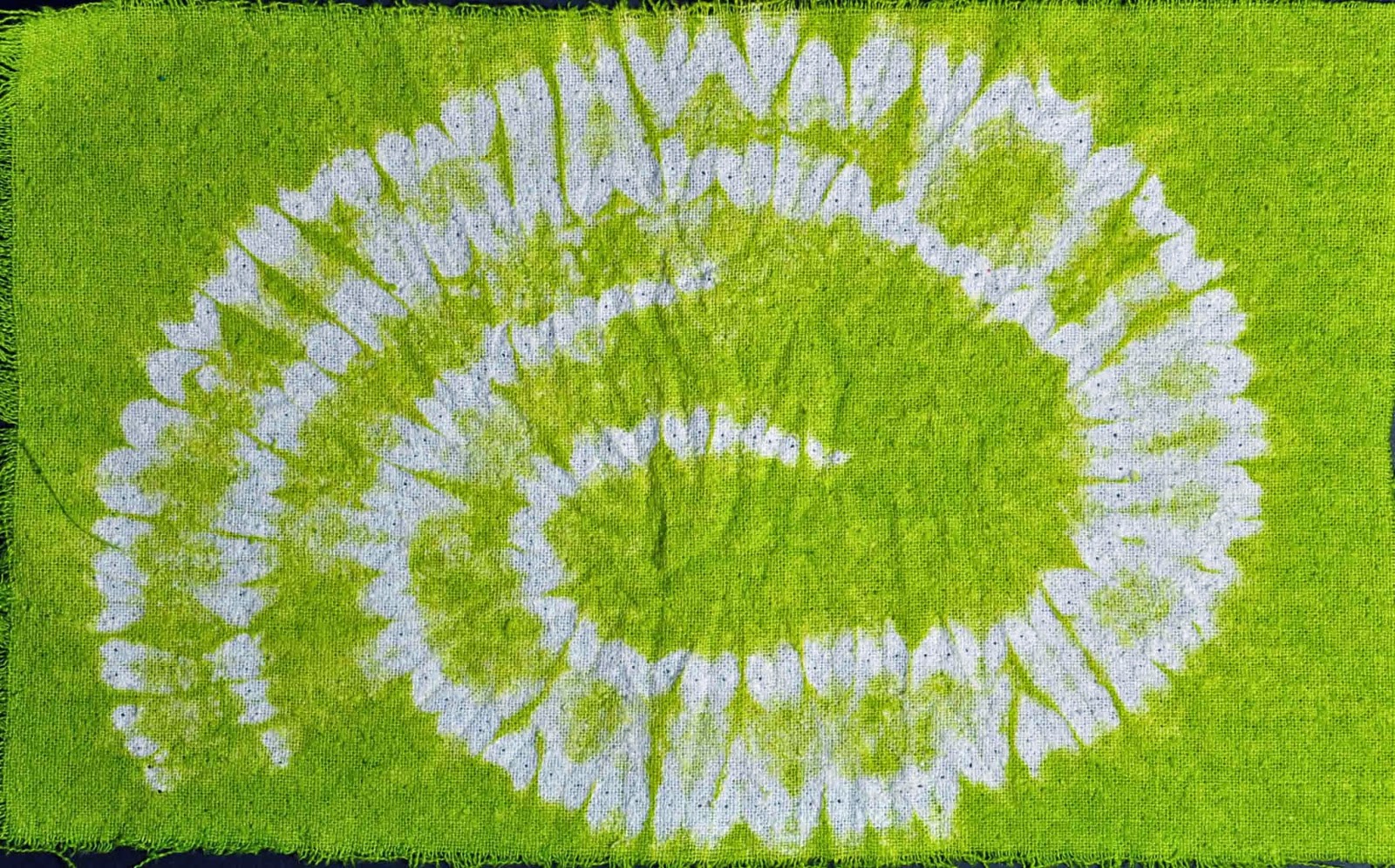 For my last piece I wanted to see what would happen if I did a tight series of concentric circles. This would essentially be a combination of mokume(which is traditionally done with a series of straight lines) and a larch design. I did some curved stitching on a single fold, each "semi-circle" being about 1/4 inch apart: 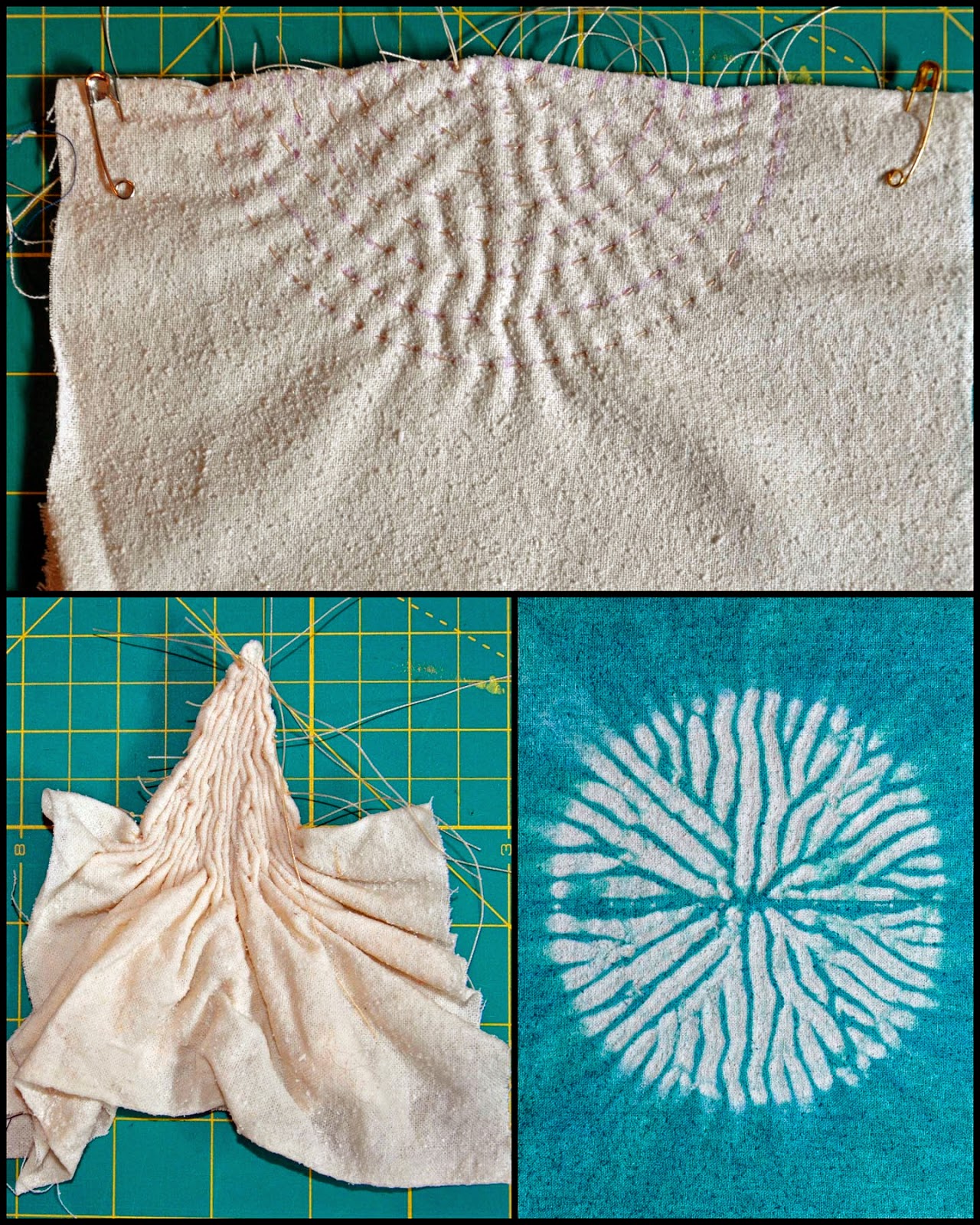 This gave a result very similar to mokume wood grain, except the pattern radiates from the center. I really liked this effect! I can see myself doing a large piece with lots of these radiating mokume.

That is it for me! See you next week with parallel stitching on a fold.