Hi, Yvonne Watson here. First I would like to thank Nienke for inviting me to join in the October blog. I am a textile artist and papermaker although these days I don’t do so much of the latter. My website is www.artdes.co.uk

And now to the Shibori.

First of all let me confess that I can’t do straight lines so wanting regularity to the piece I first drew lines on my fabric with a pen that irons out.
The muslin fabric was folded in 4.
Then I stitched along the lines with a cotton thread and pulled the stitches together as tightly as I could. 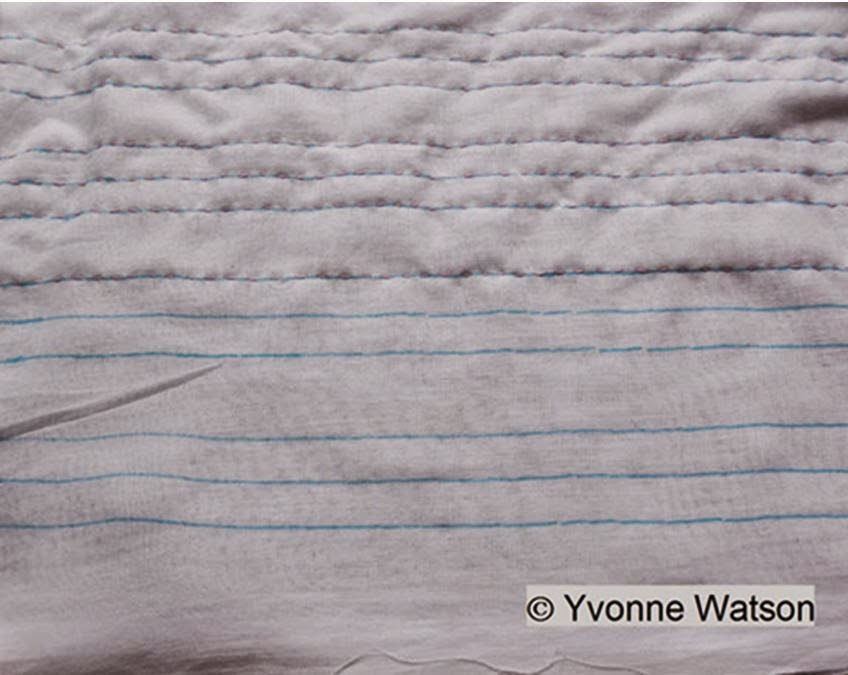 I dyed the piece using MX procion dyes Scarlet MX-3G Yellow MX with a touch of Turquoise MX-G. I then painted Royal blue MX-R mixed with a touch of black along the stitched lines and here is the result of the first of my experiments: 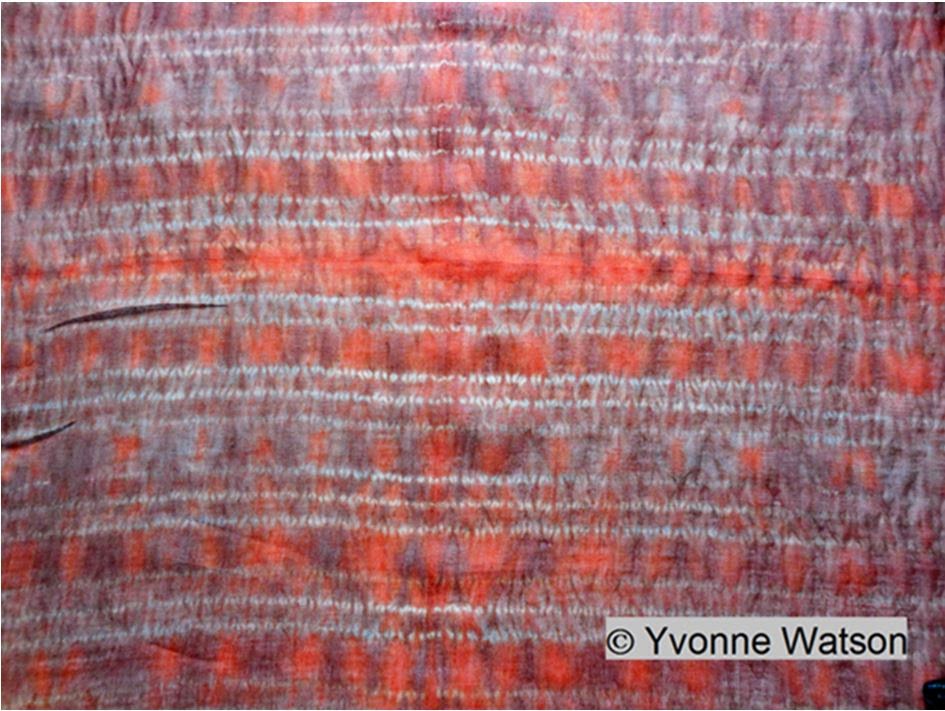 I folded a piece of cotton fabric in four and then folded it again to form a triangle.
I stitched along the piece in various places with a running stitch and then drew up the stitches as I went along and over sewing them to create more of a resist. 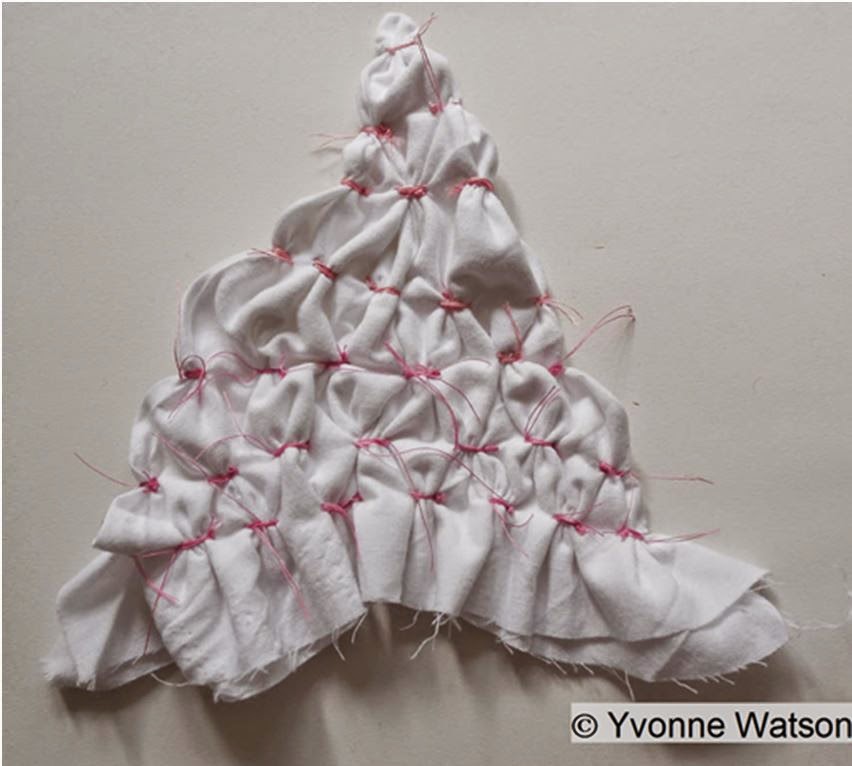 At first I dyed this piece with diluted Turquoise MX-G with a touch of Yellow MX but soon realised that there would not be sufficient of a contrast with the white for the stitches to show so I dyed it again using Turquoise mixed with Magenta. 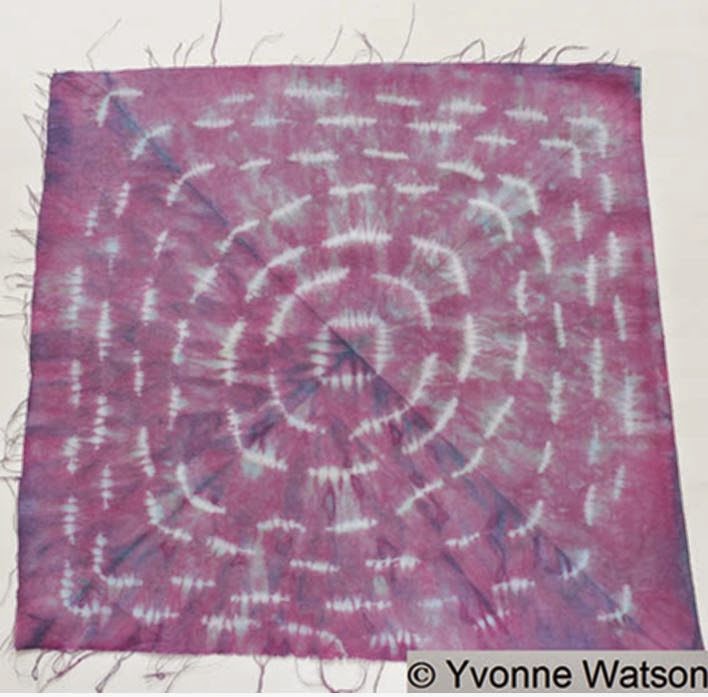 Some times I use polyester fabrics in my artwork and thought I would experiment with some using a Shibori technique.
Obviously I wouldn’t be able to dye these fabrics with procion dyes so I decided to use transfer paints for this sample.
First I painted two pieces of paper, one yellow and one in magenta. These were set aside to dry.
Next I took some white polyester fabric and ironed the yellow colour onto the fabric.
I then stitched the fabric with several rows of straight stitching.
I pulled up the stitches as tightly as I could but I didn’t tie off the ends.
I then placed the red paper face down on the piece and ironed one half of the fabric until the red had been transferred. The heat also affected the fabric so it remained pleated. 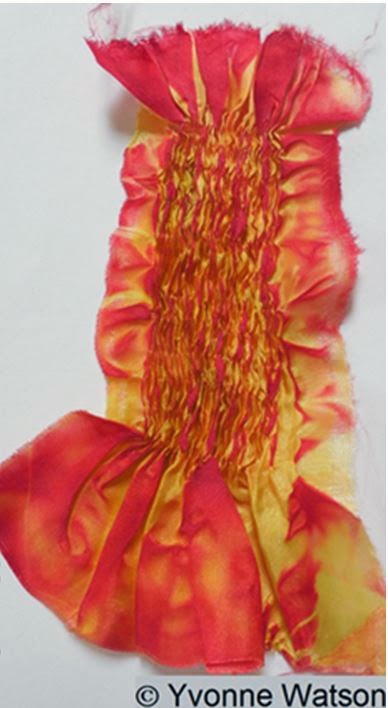 I cut the piece in half and I decided that I would ease some of the stitching so that it was not so tight. I hadn’t tied off the ends so it wasn’t difficult.
Again I ironed the other half with the red paper. When I had removed the paper I ironed the fabric again until it was flat. I really liked the effect: 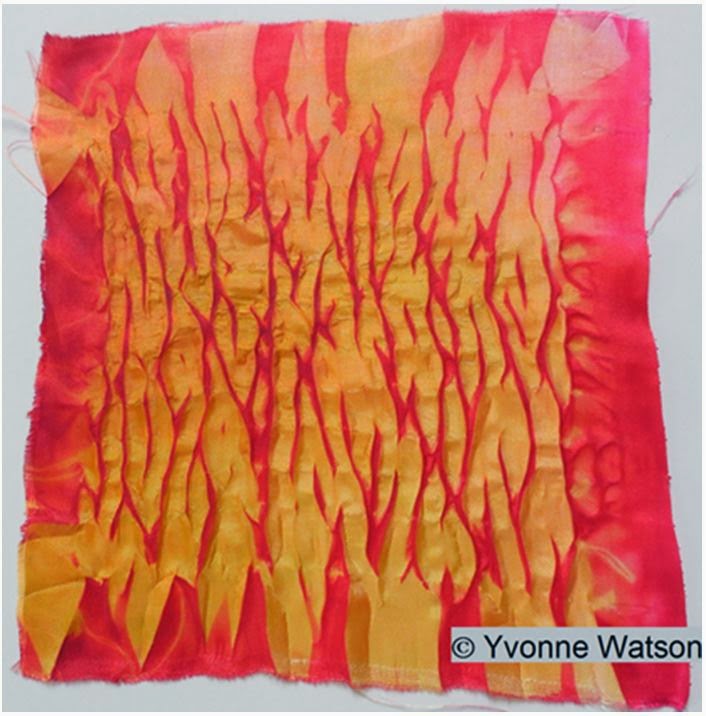 That's it for now! Tomorrow Eke Krug will share her first results!
Posted by Nienke at 6:00 AM