The curved lines were so much fun to create! I actually continued to make more in response to the question "What if I tried..." I have posted extra finished results at the end of the report.

Sample 1: Machine stitched resist
I randomly folded a piece of Cotton Sateen and pressed in the folds. I then stitched curved lines using a scallop stitch, triangle satin stitch and a triple stitch. The last one, the triple stitch, was almost ineffective. I am liking the broken designs of the other two stitches when the stitching was removed as well as the infinite variety of color hue depending on whether it was on a thickly folded or less thickly folded area. 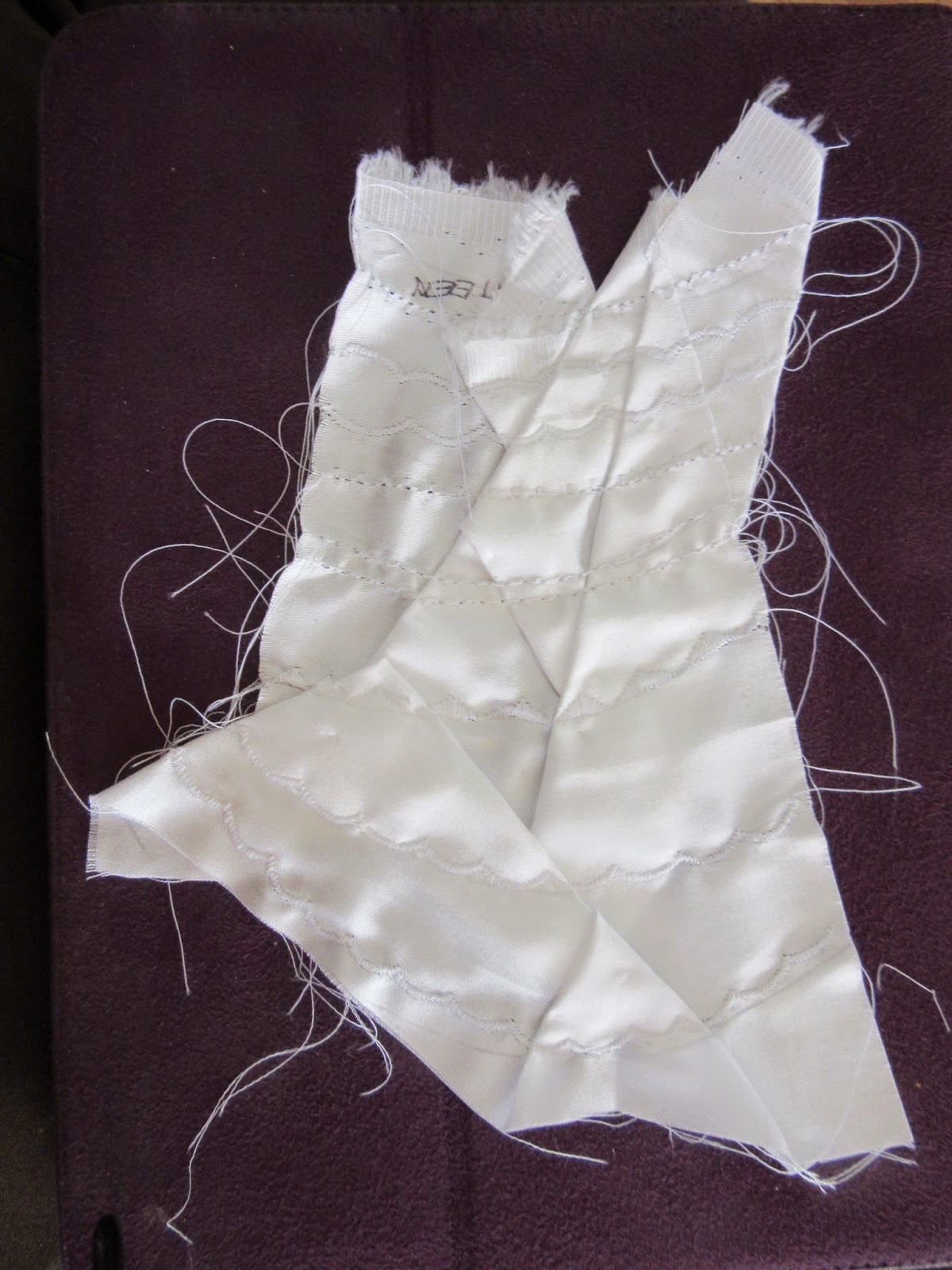 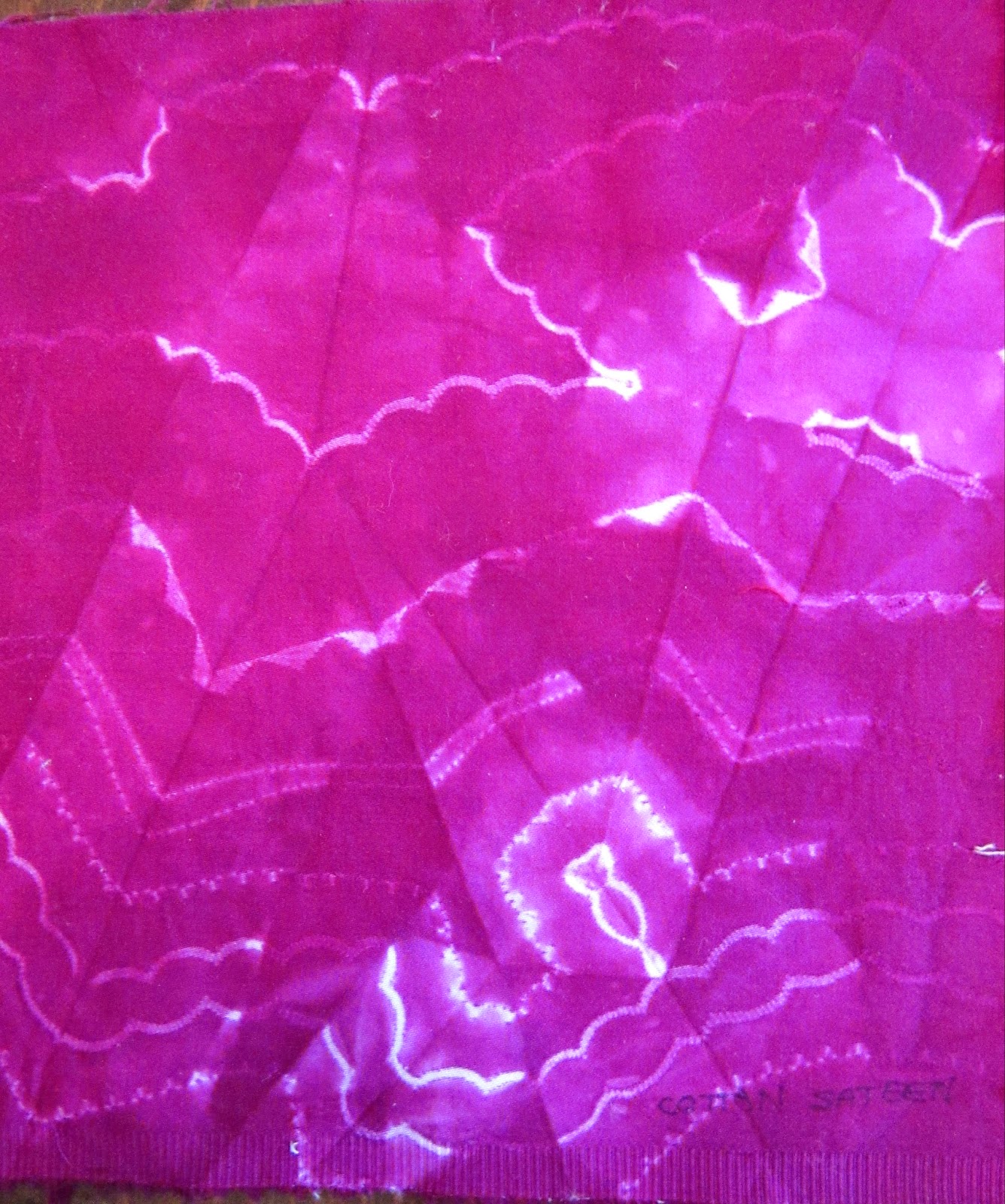 Sample 2: Scrolls
This piece was originally dyed  pink on cotton. After the scrolls and small circles were drawn up, it was dyed in antique bronze. Not the best choice of color. 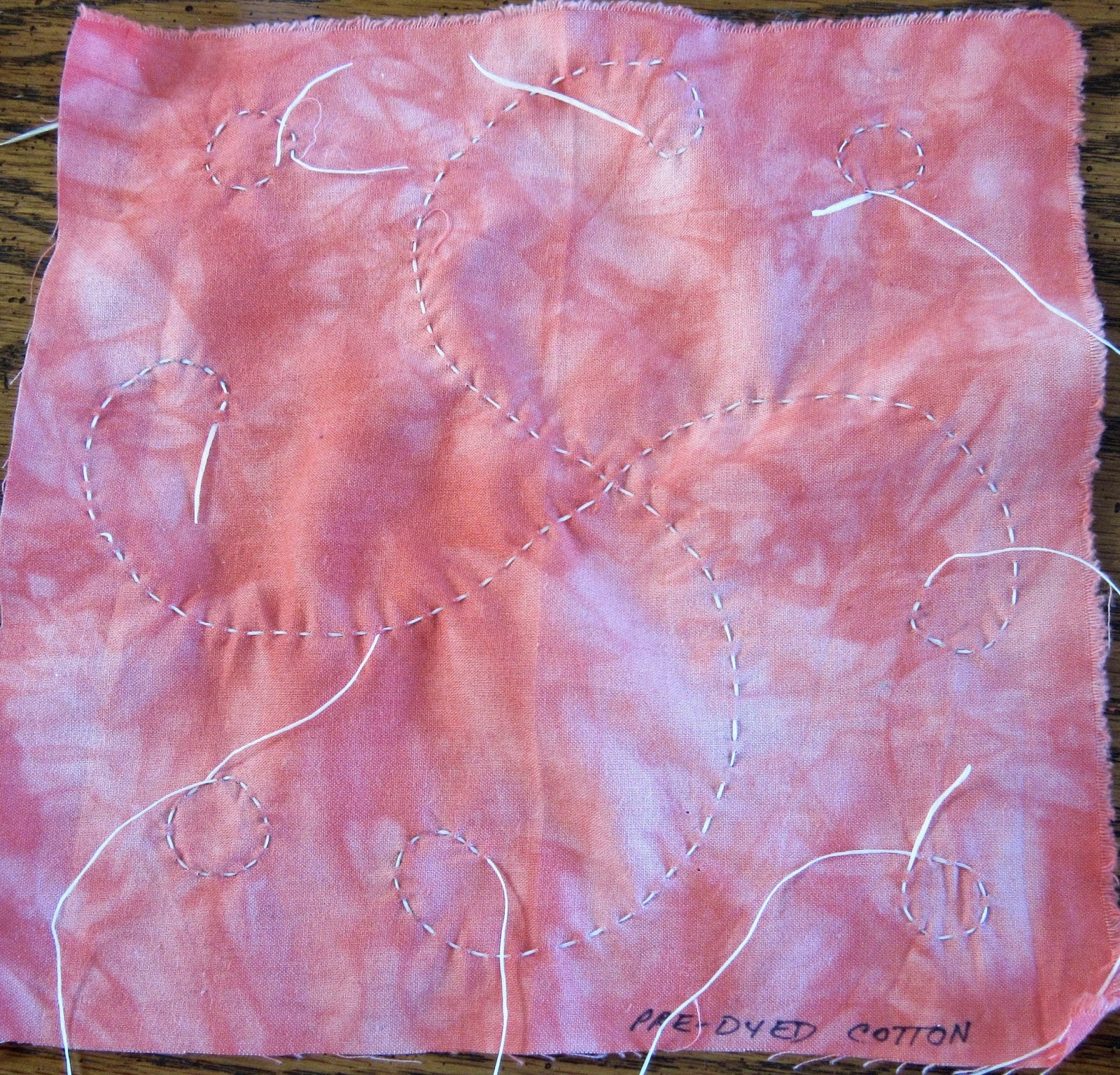 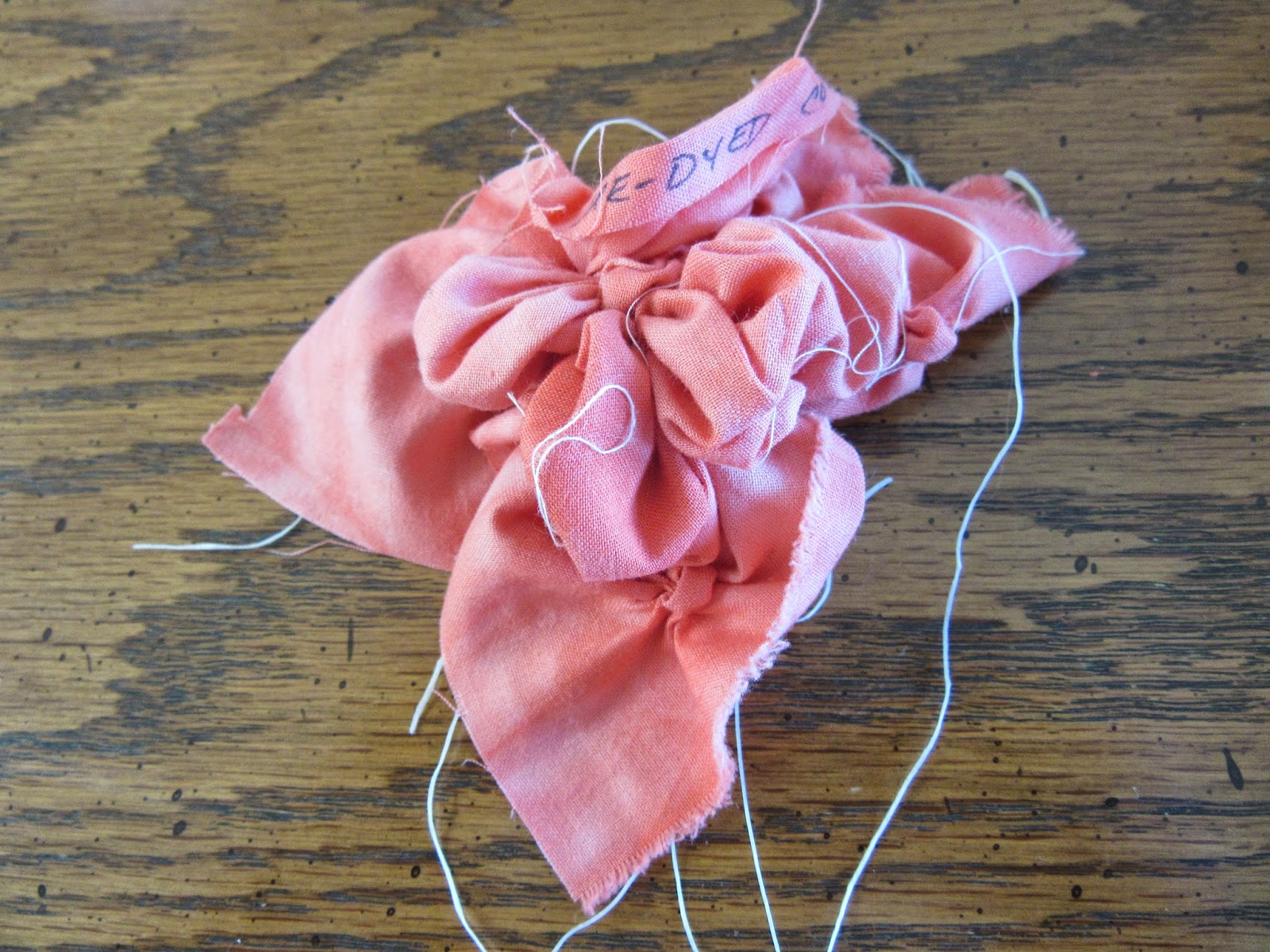 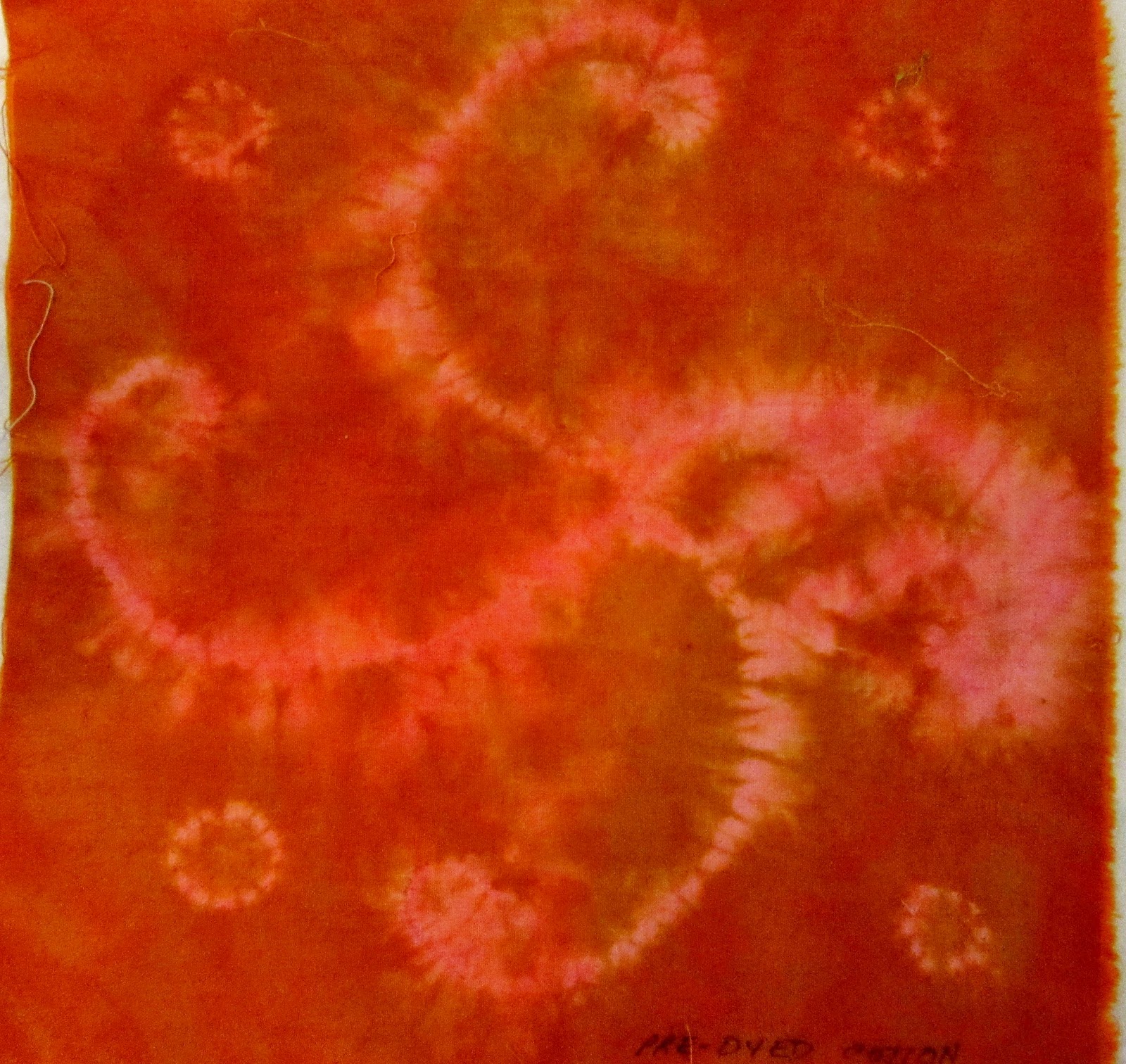 Sample 3: water?
A piece of raw silk was folded in half, stitches and drawn up snugly and dyed in blue. More white showed than anticipated. Perhaps due to the thickness of the fabric and tightness of compression. 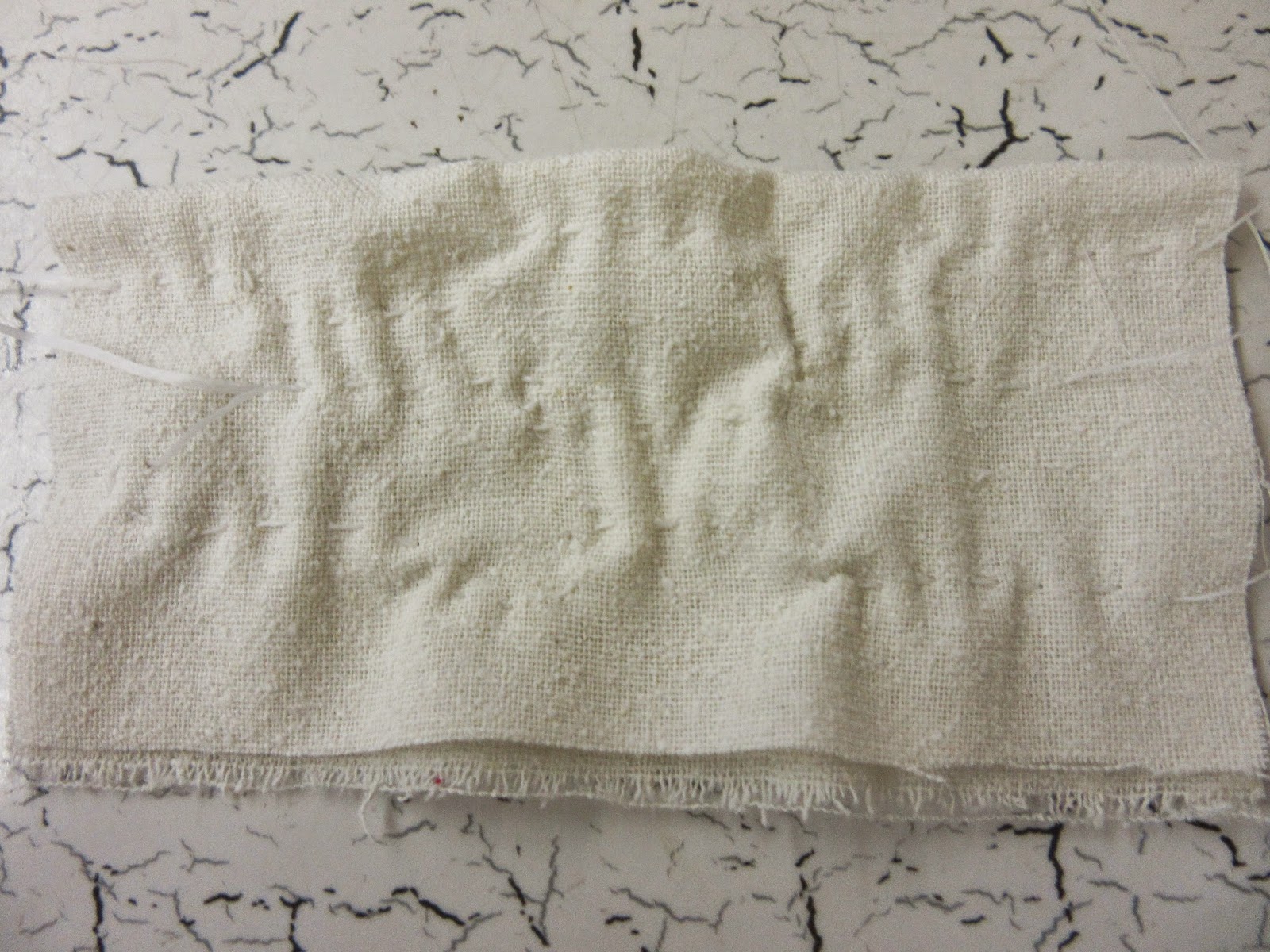 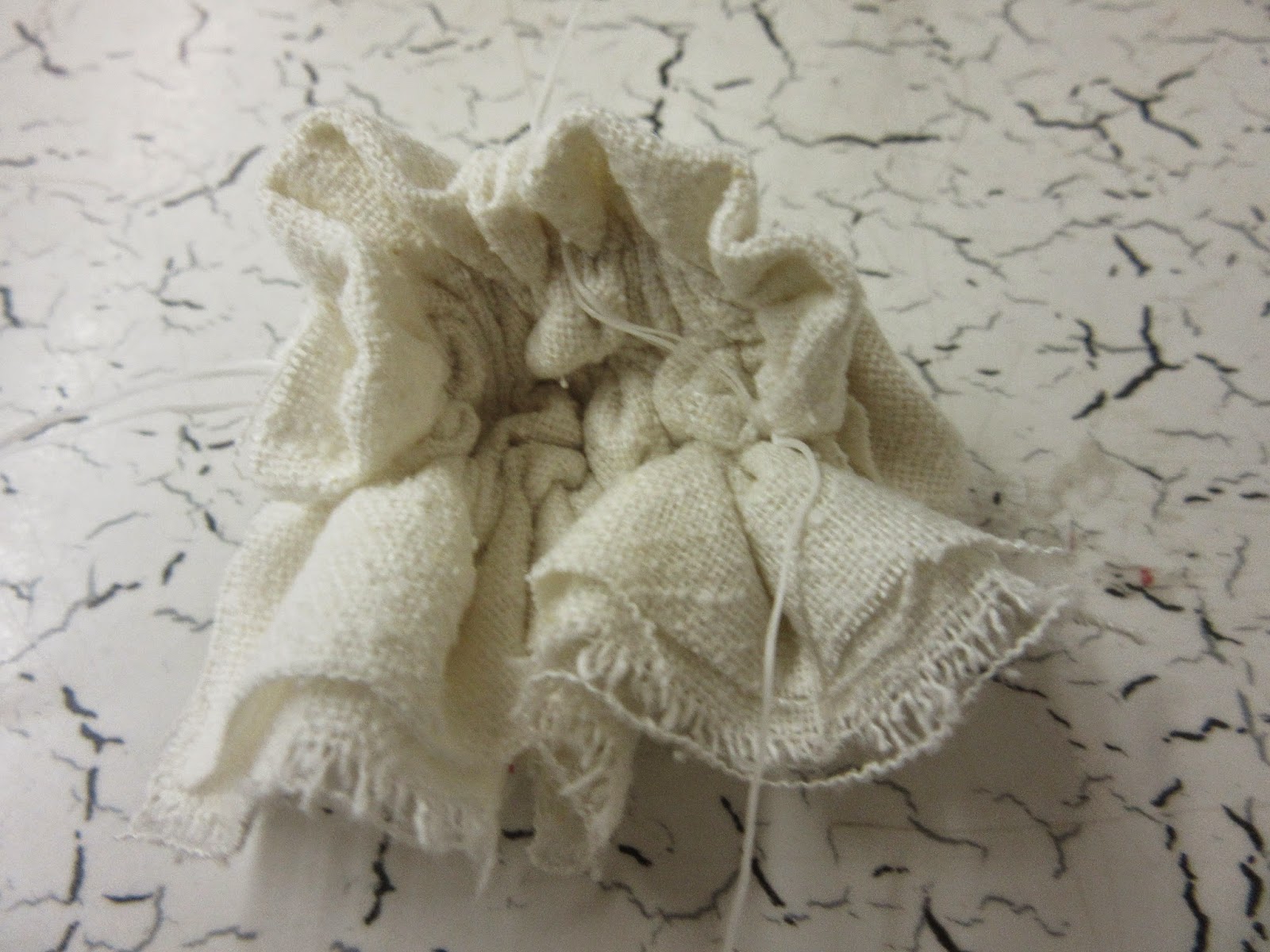 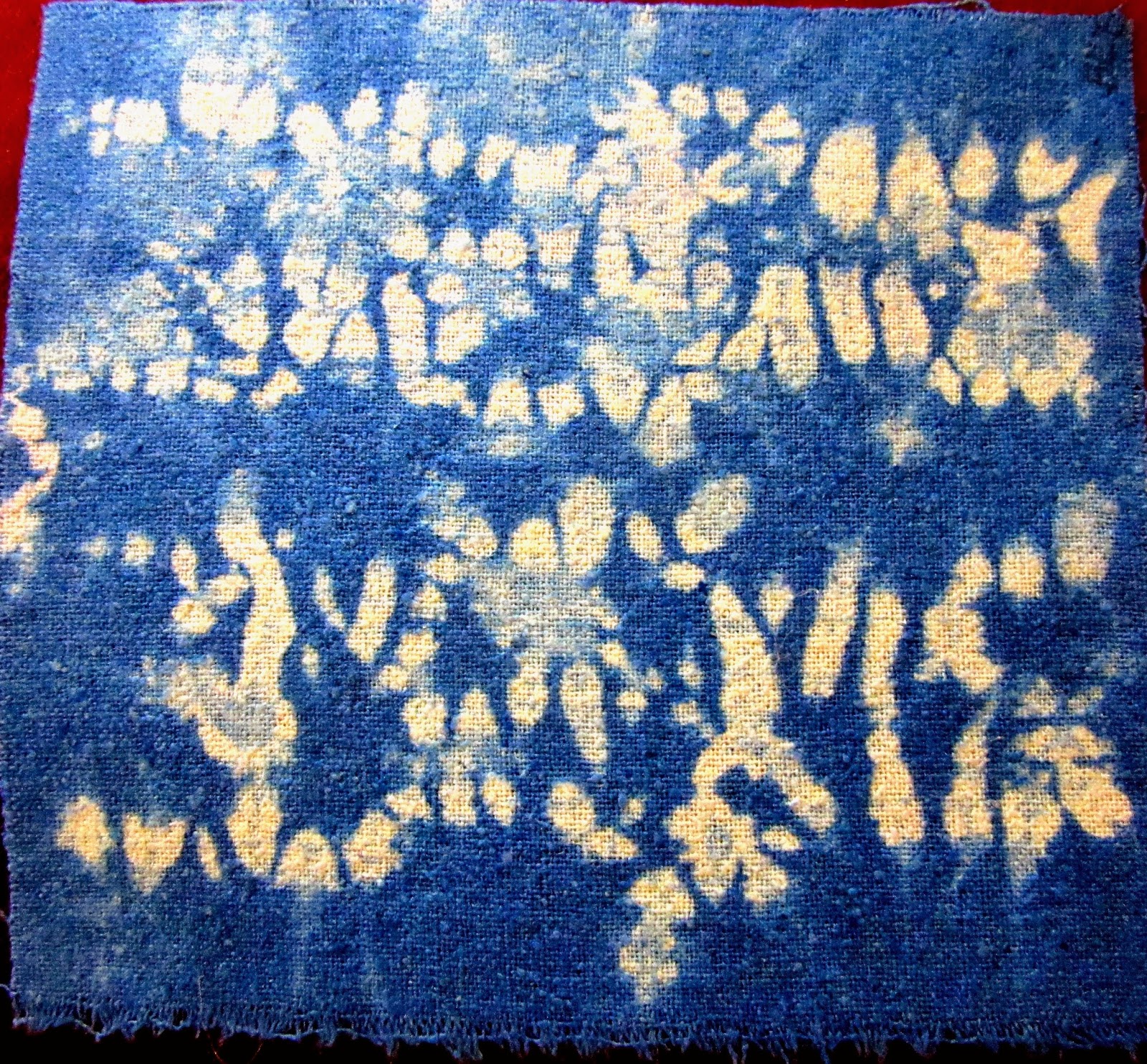 Sample 4: Circles
A variety of circles were stitched on a piece of test 400 fabric (cotton). I love the depth and dimension created by the resist. 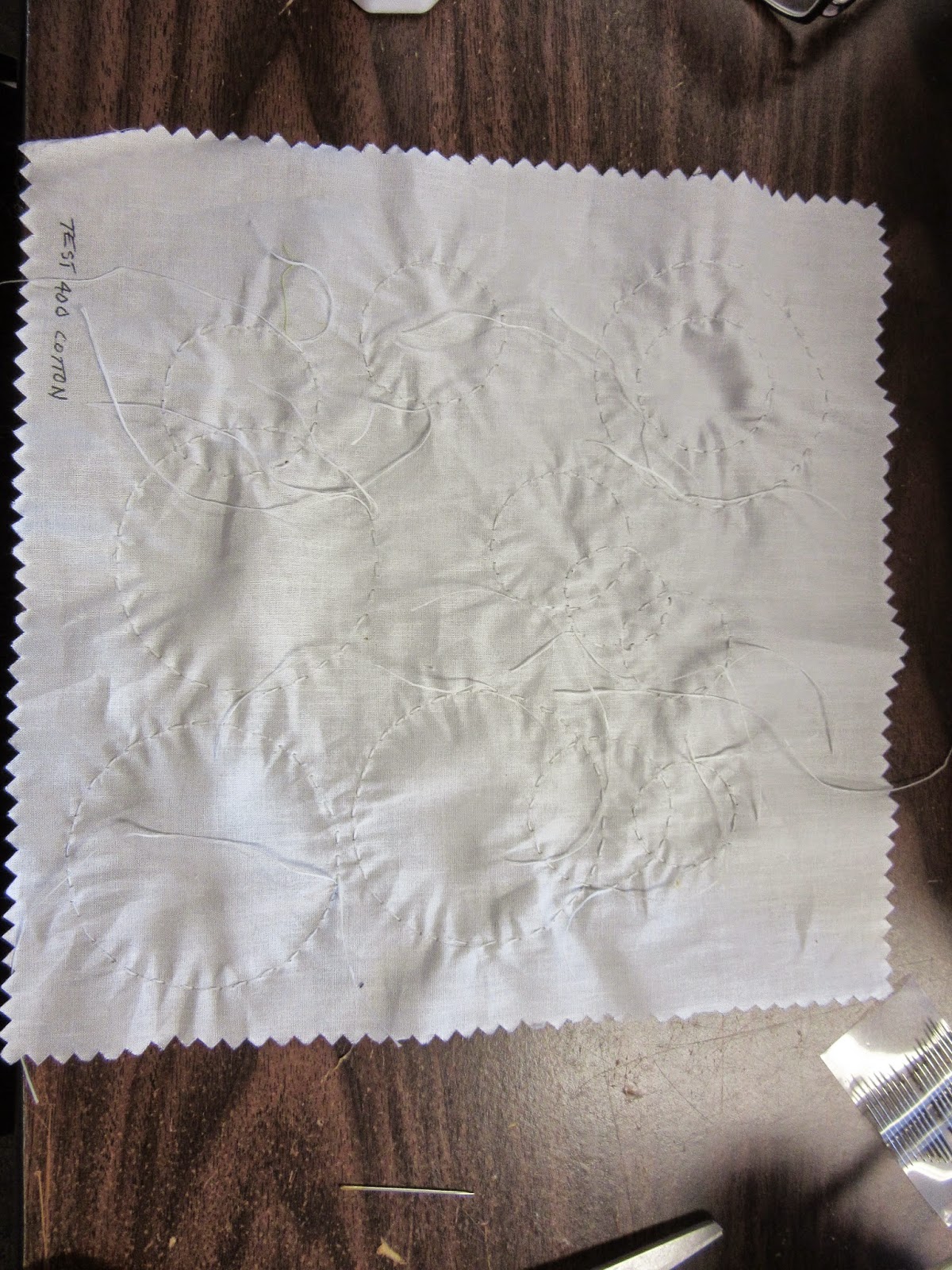 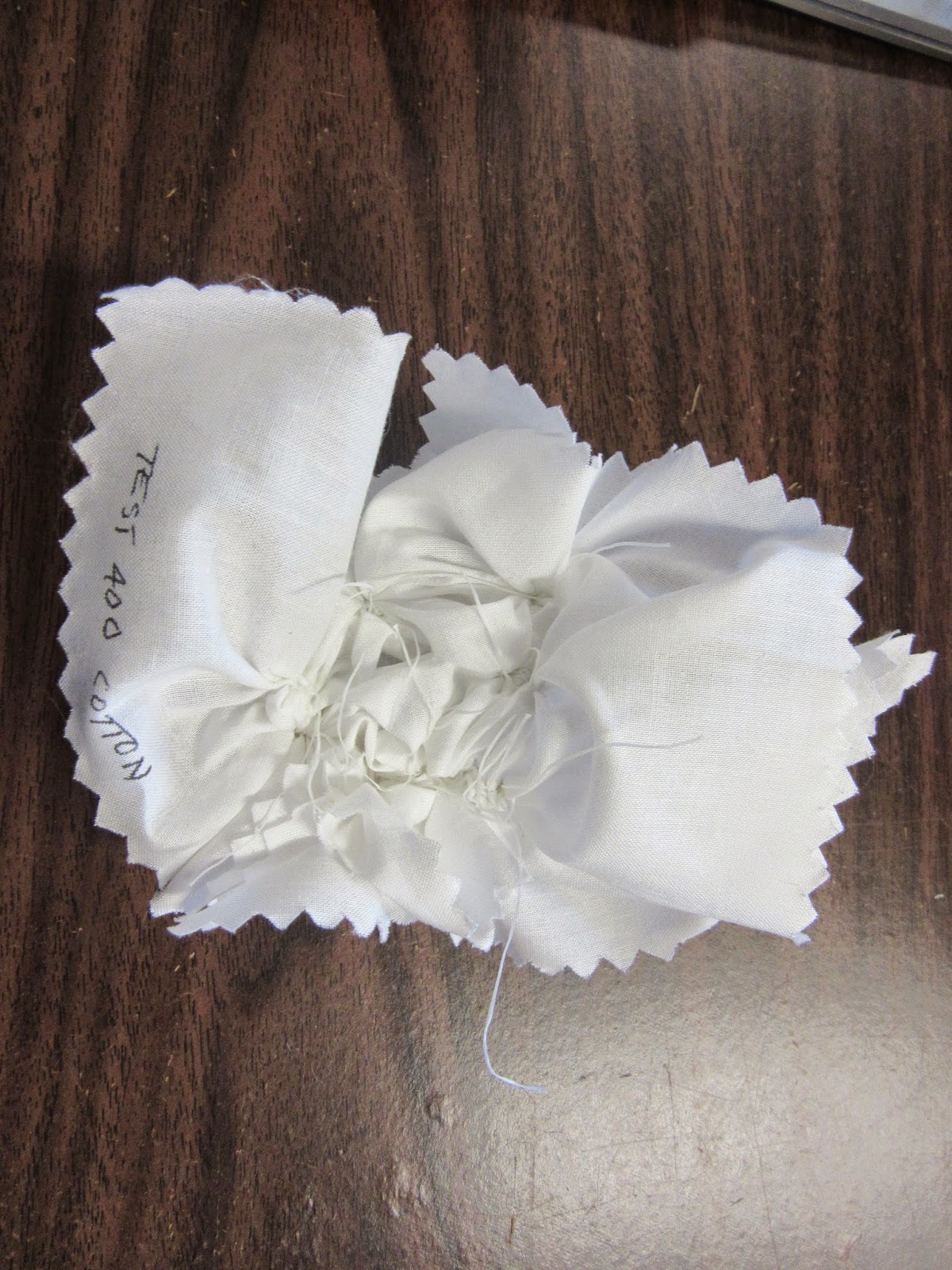 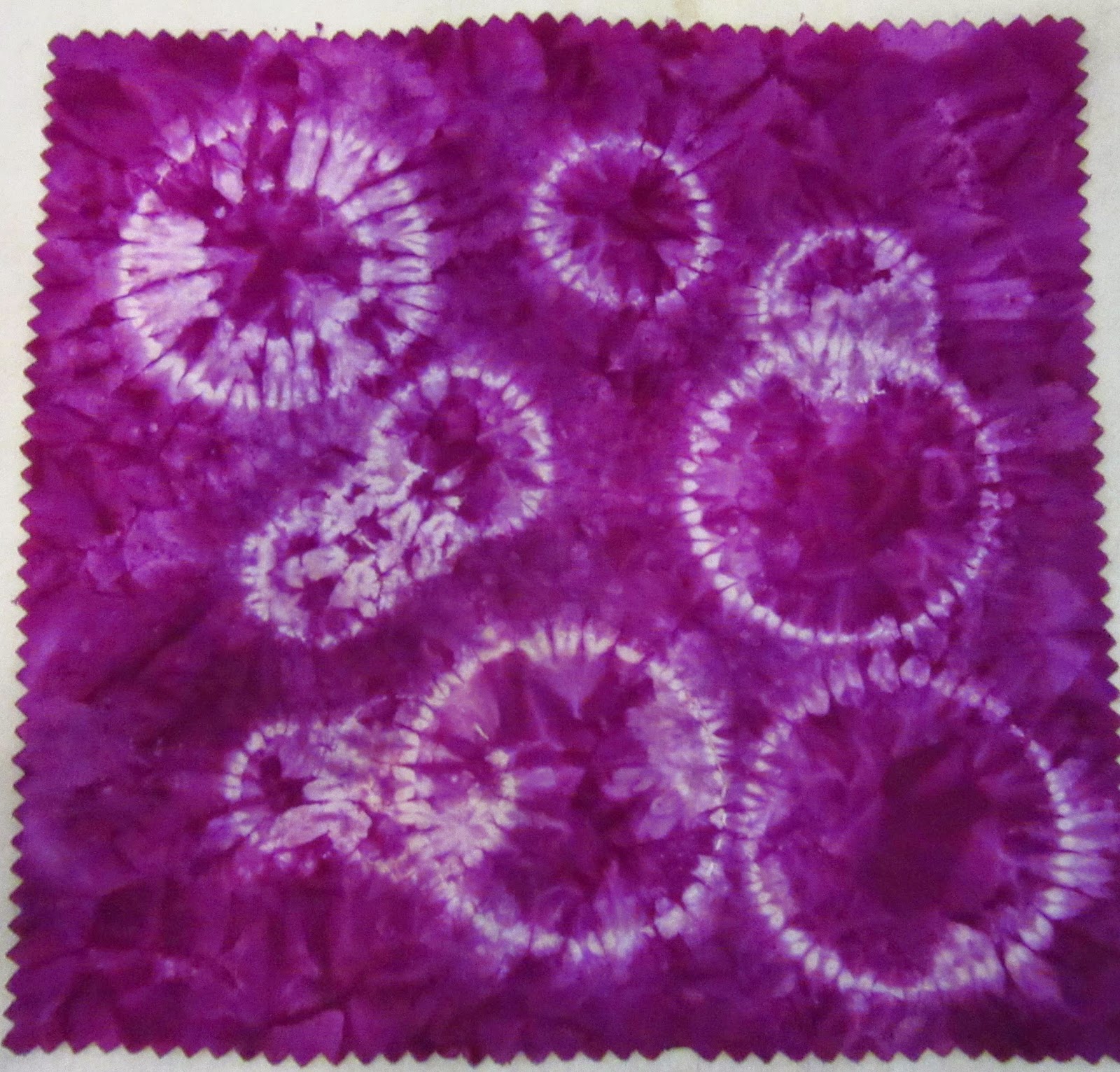 Sample 5: Spiral
A simple spiral was created using two pieces of Dharma rayon fabric. The spiral was tightly drawn up and dyed in a fuchsia mix of dye. Love the boldness and clarity of the design. 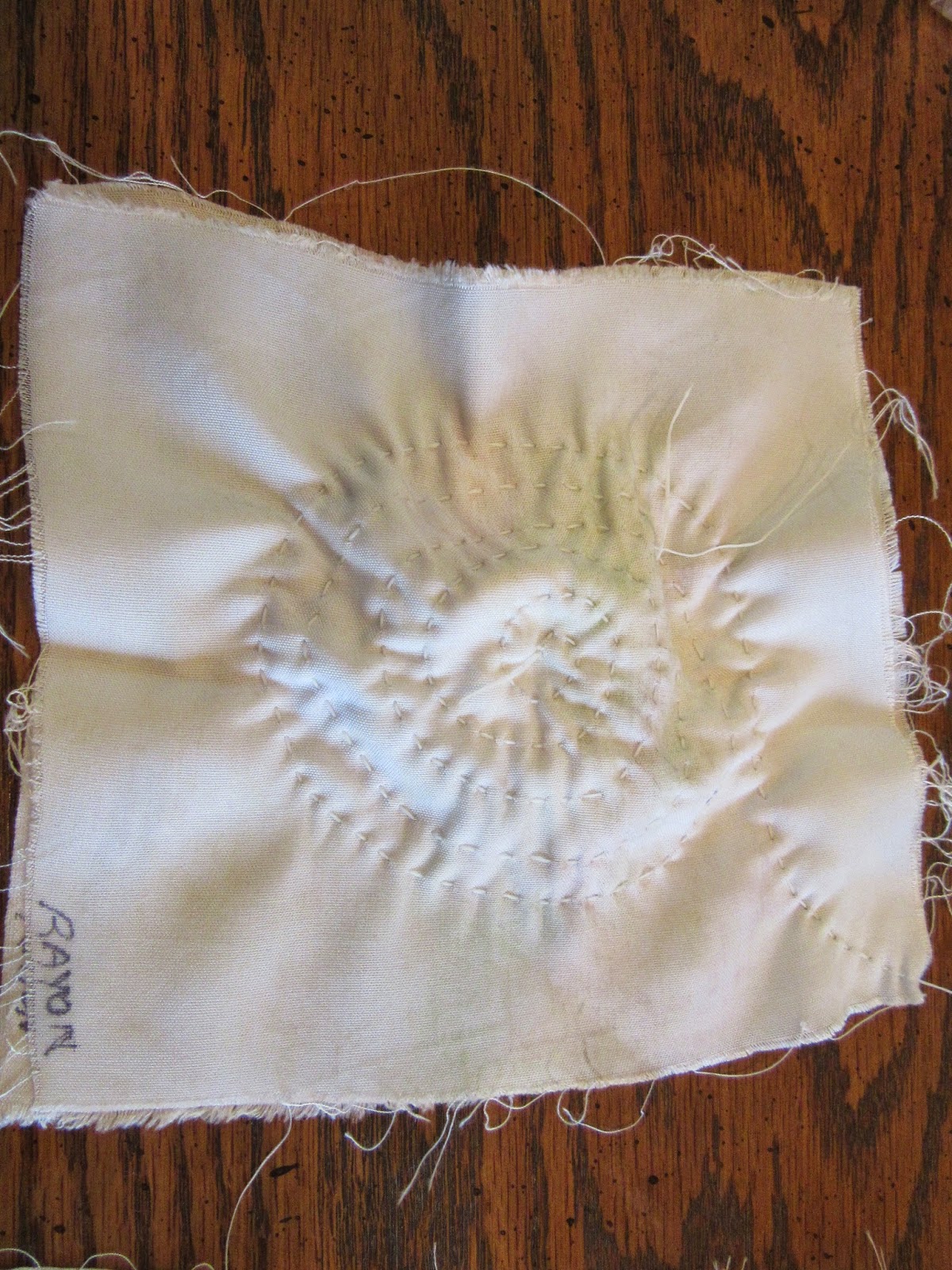 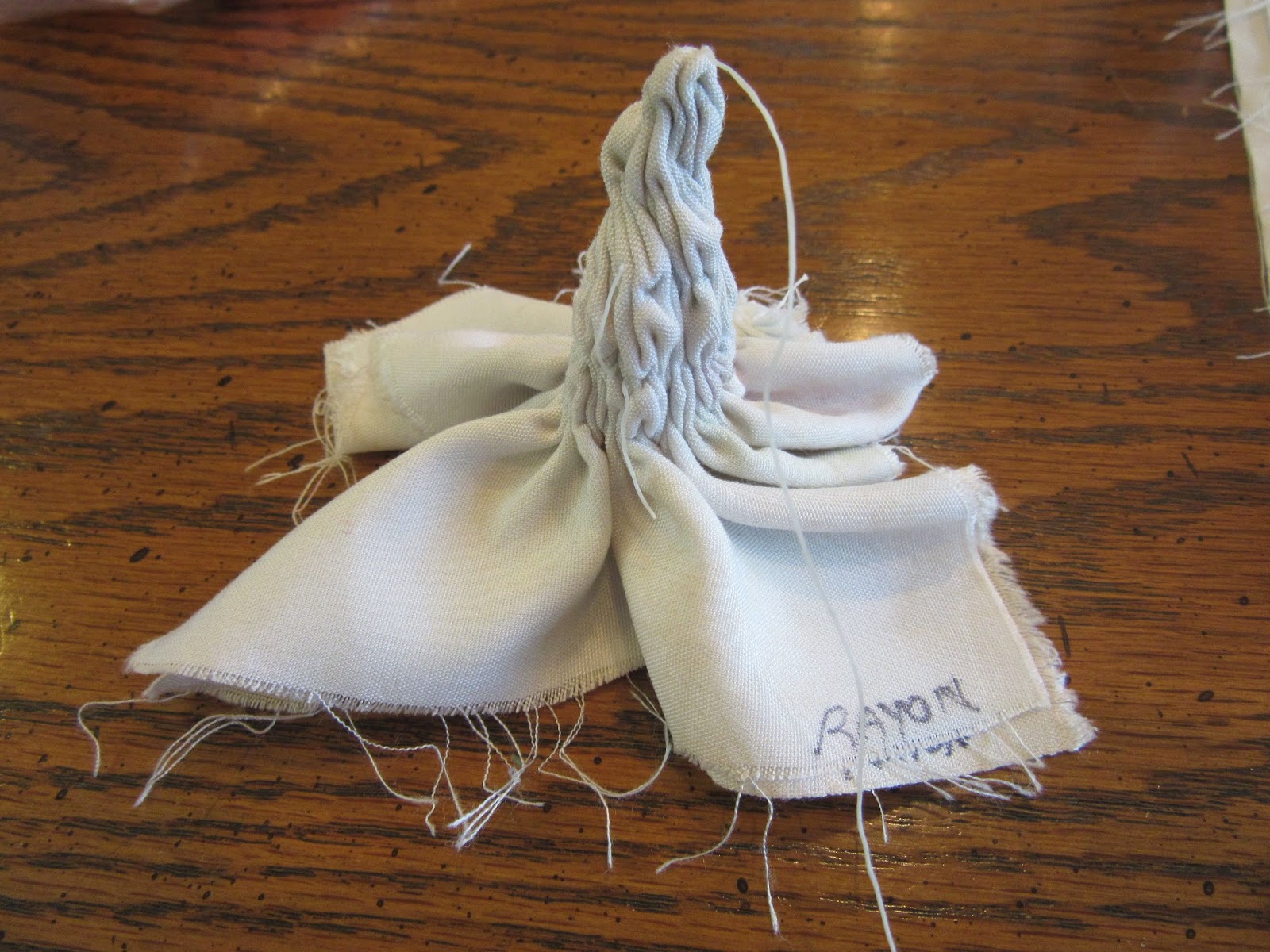 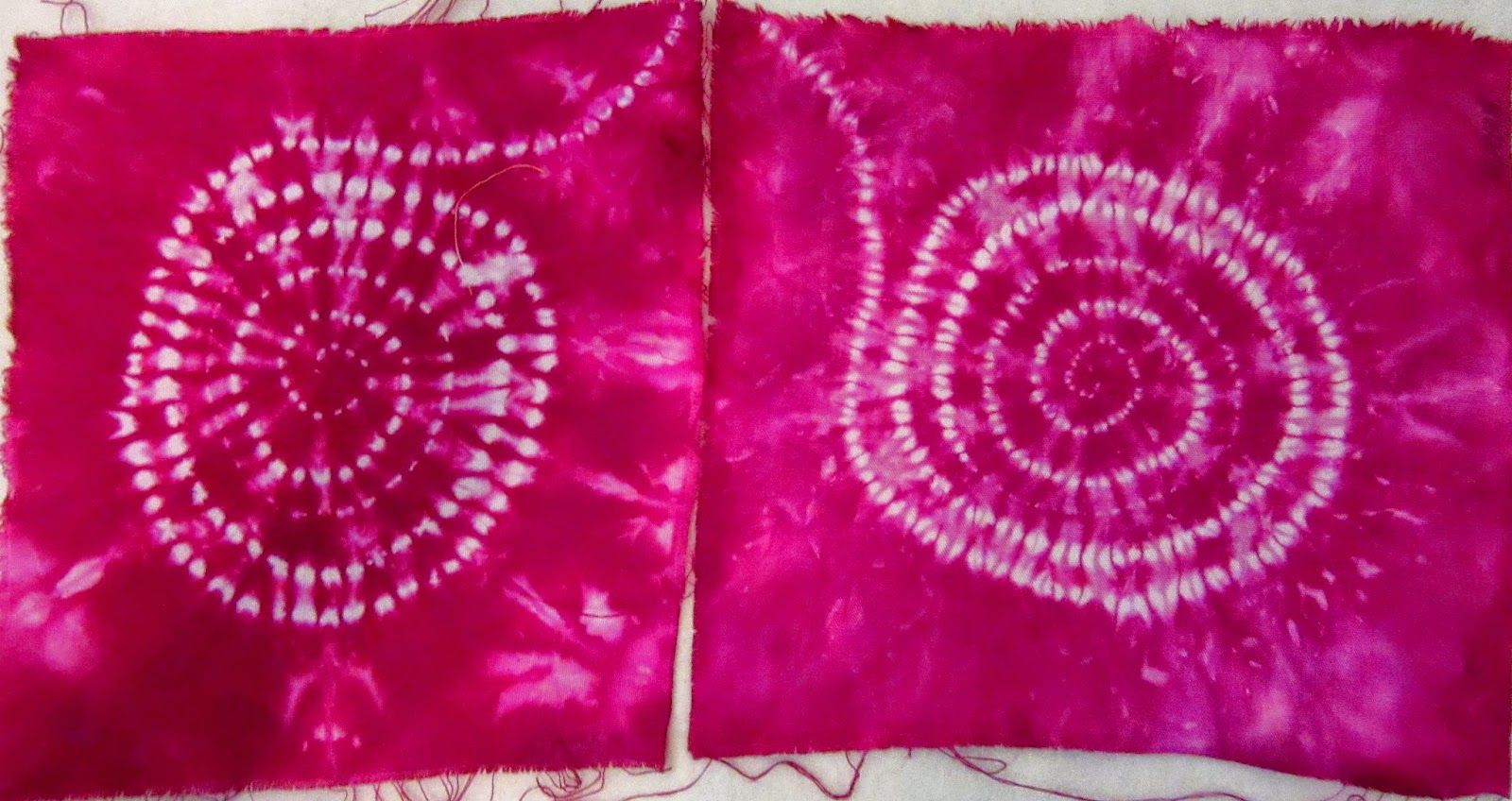 the orientation of the second piece has been rotated

Sample 6: Cursive writing
On a whim I wrote in cursive script, "Shibori" and stitched and drew in the resist. I originally did it in blue but the dye was too old and did not take well. I restitched it to try again. I was surprised how many breaks I had to make in the stitching to be able to pull it tightly. The tiny circles (dots for the i's) did not show well- there were only three or four tiny stitches. It opens the possibility to try again with other words. 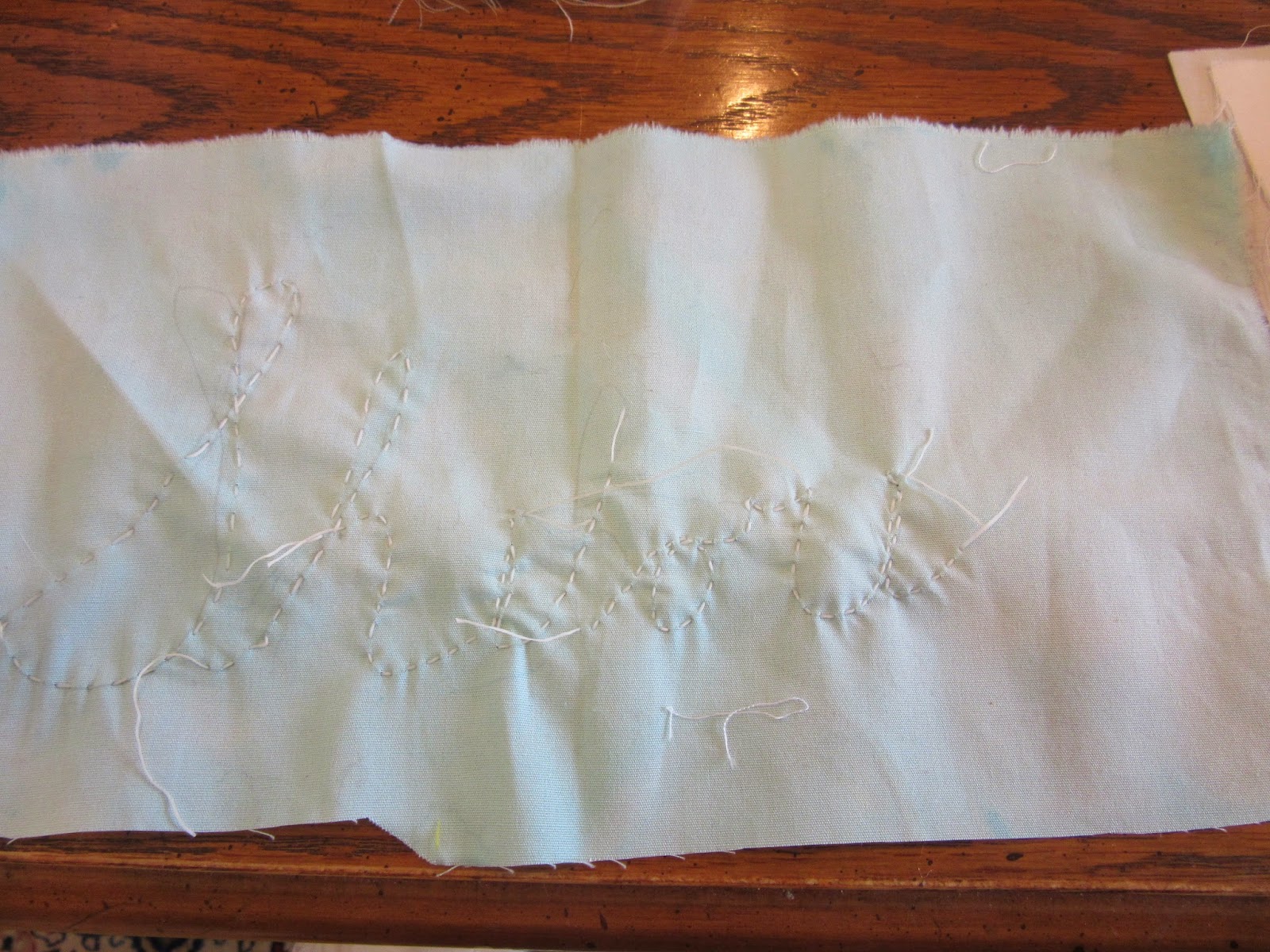 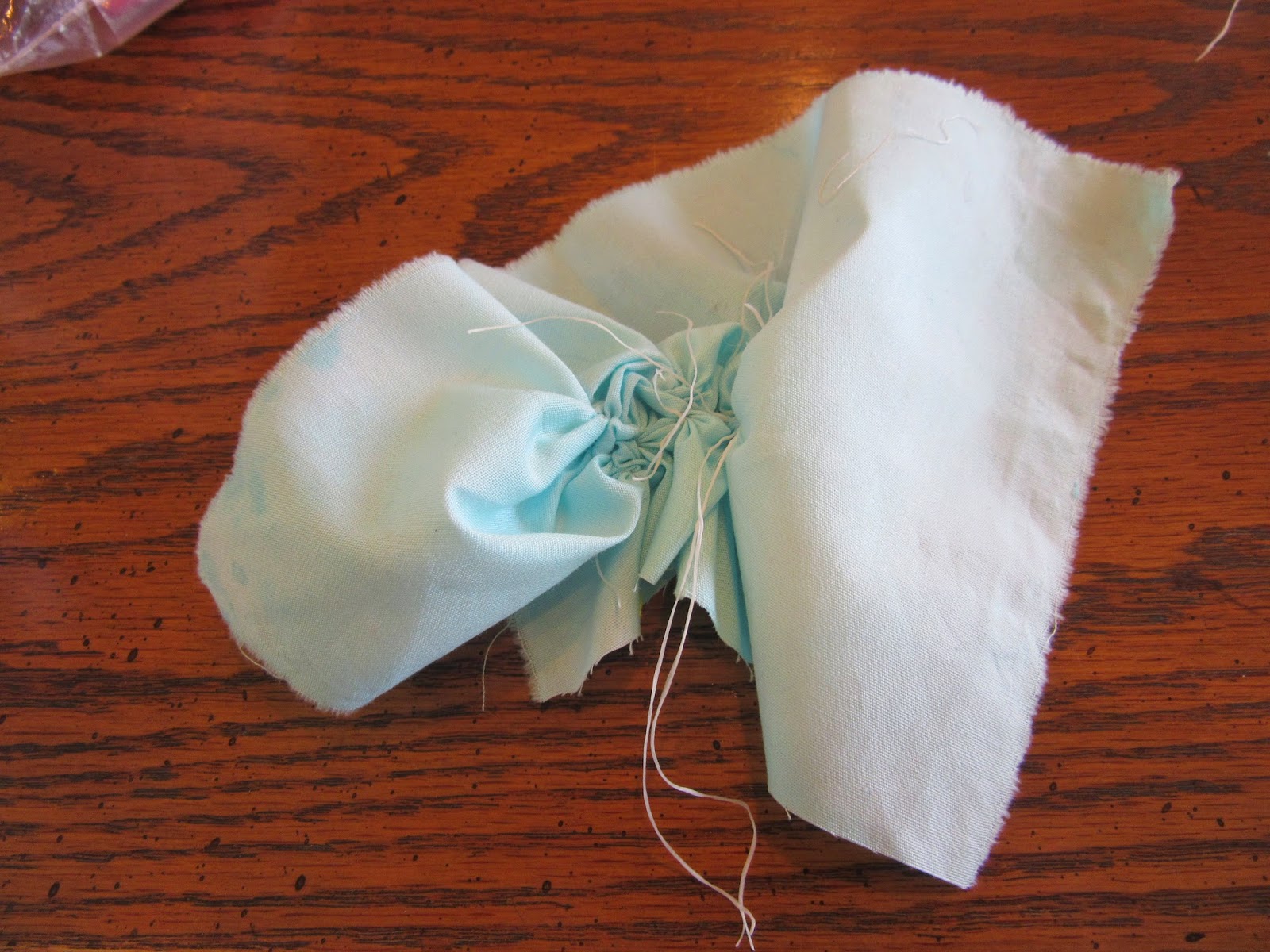 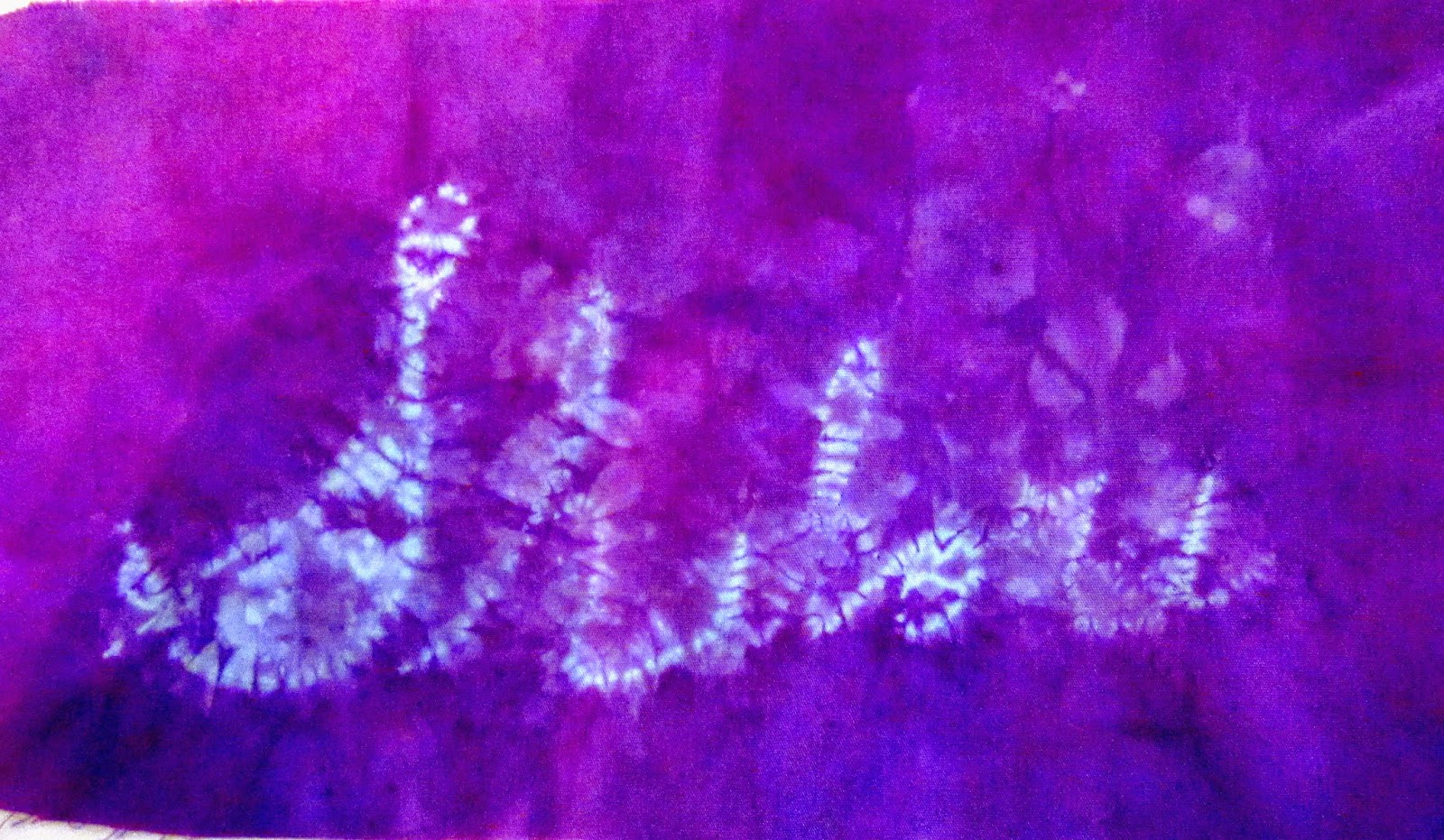 OTHER SAMPLES CREATED BECAUSE THE IDEAS WERE FLOWING!

watery lines that hit the wrong dye pots! I intended to make them blue but once drawn up it was hard to remember what the design was so they were randomly assigned to dye pots.  Scarlet is Dharma rayon, darker one is linen. 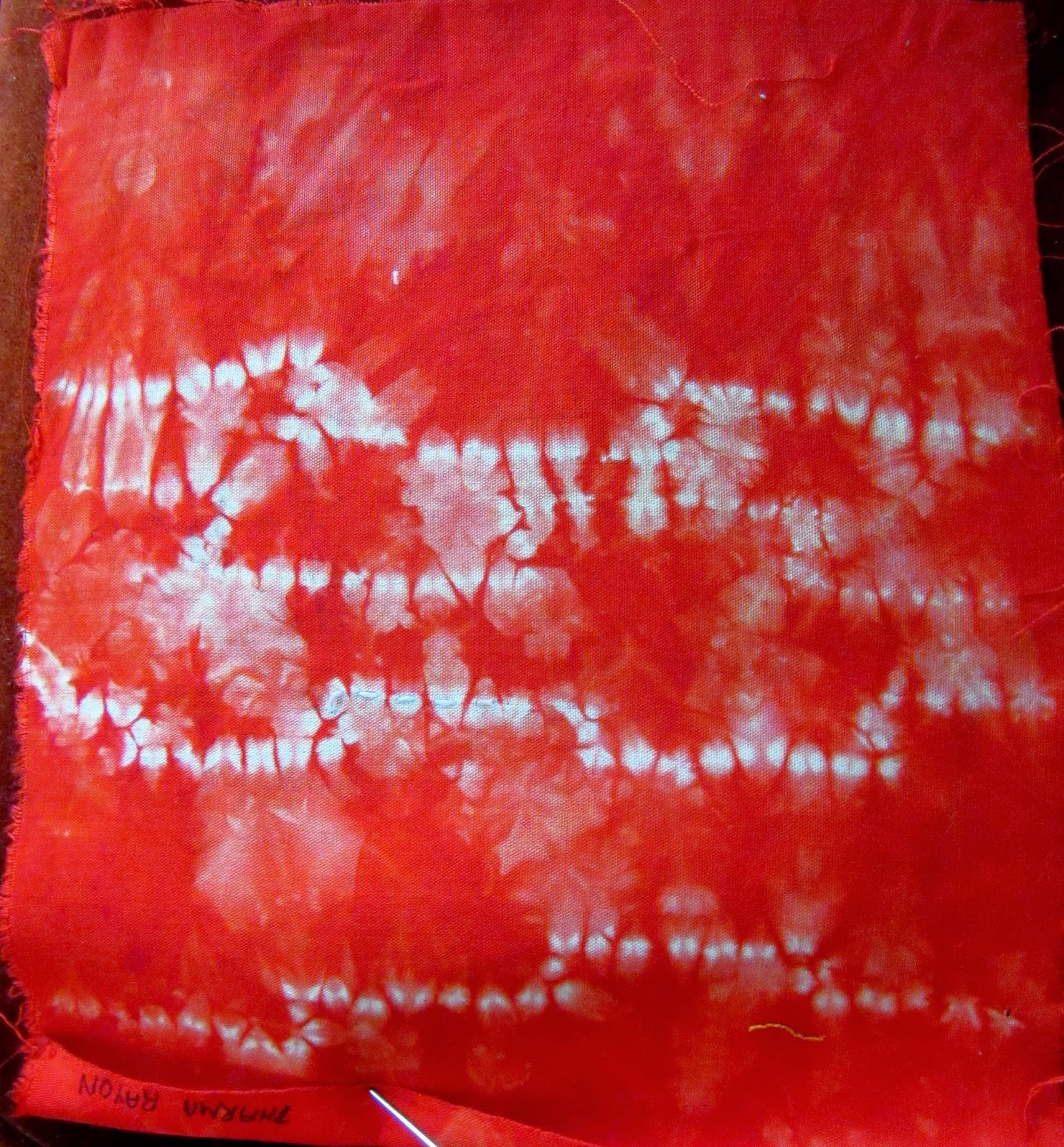 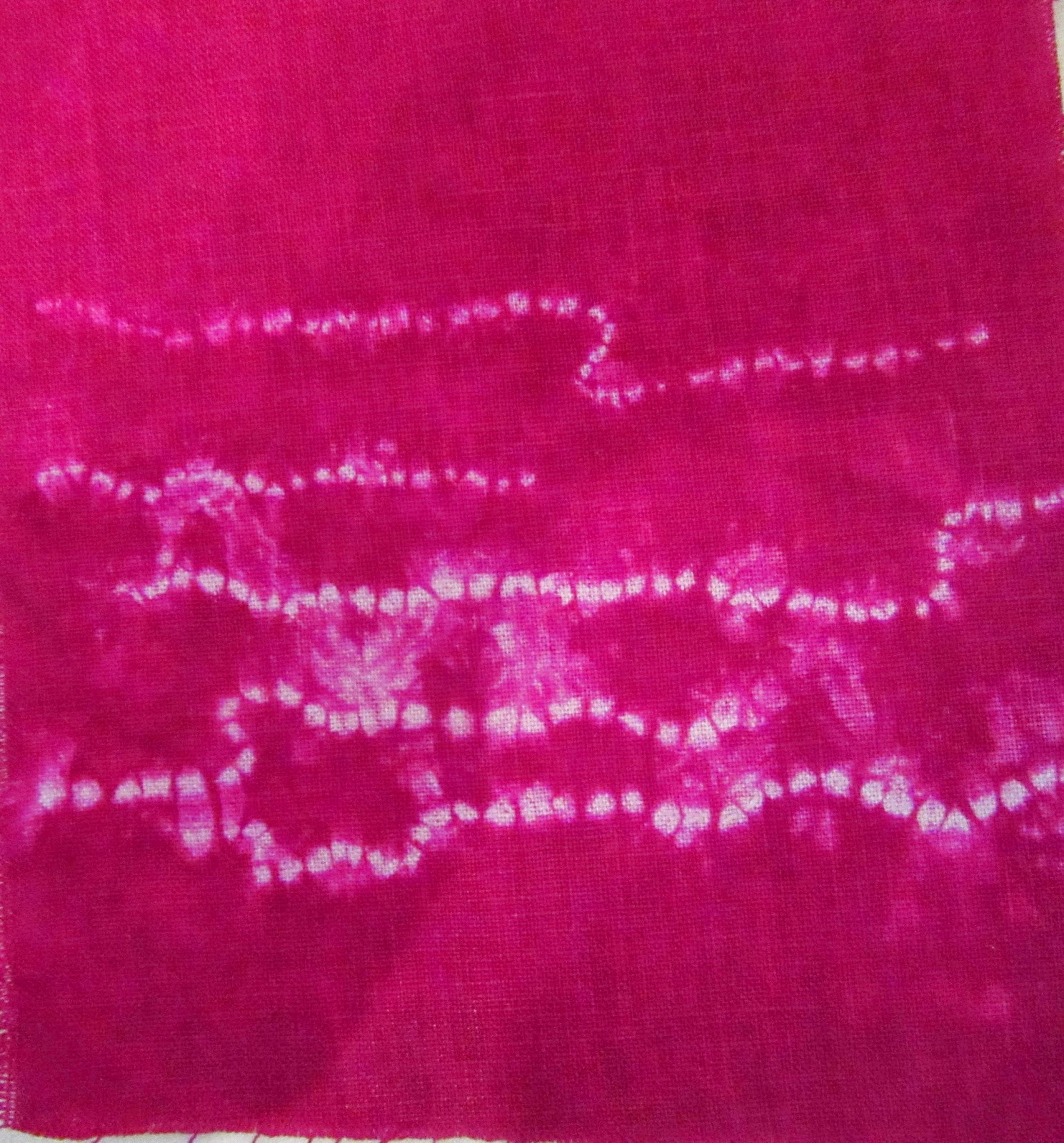 half to two-third circles stitched randomly 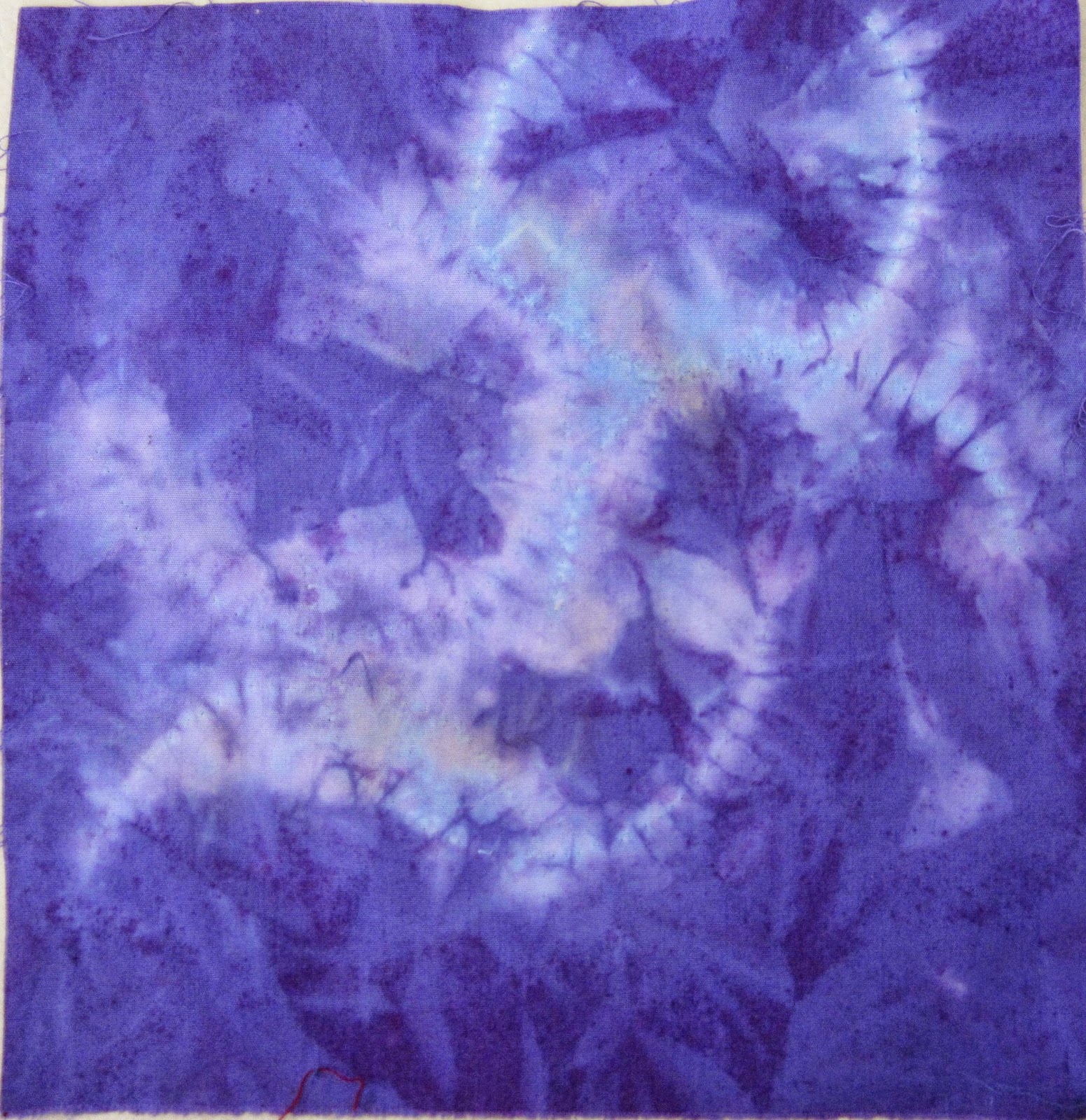 The lines piled up on one another and created areas
where the dye could not penetrate well. 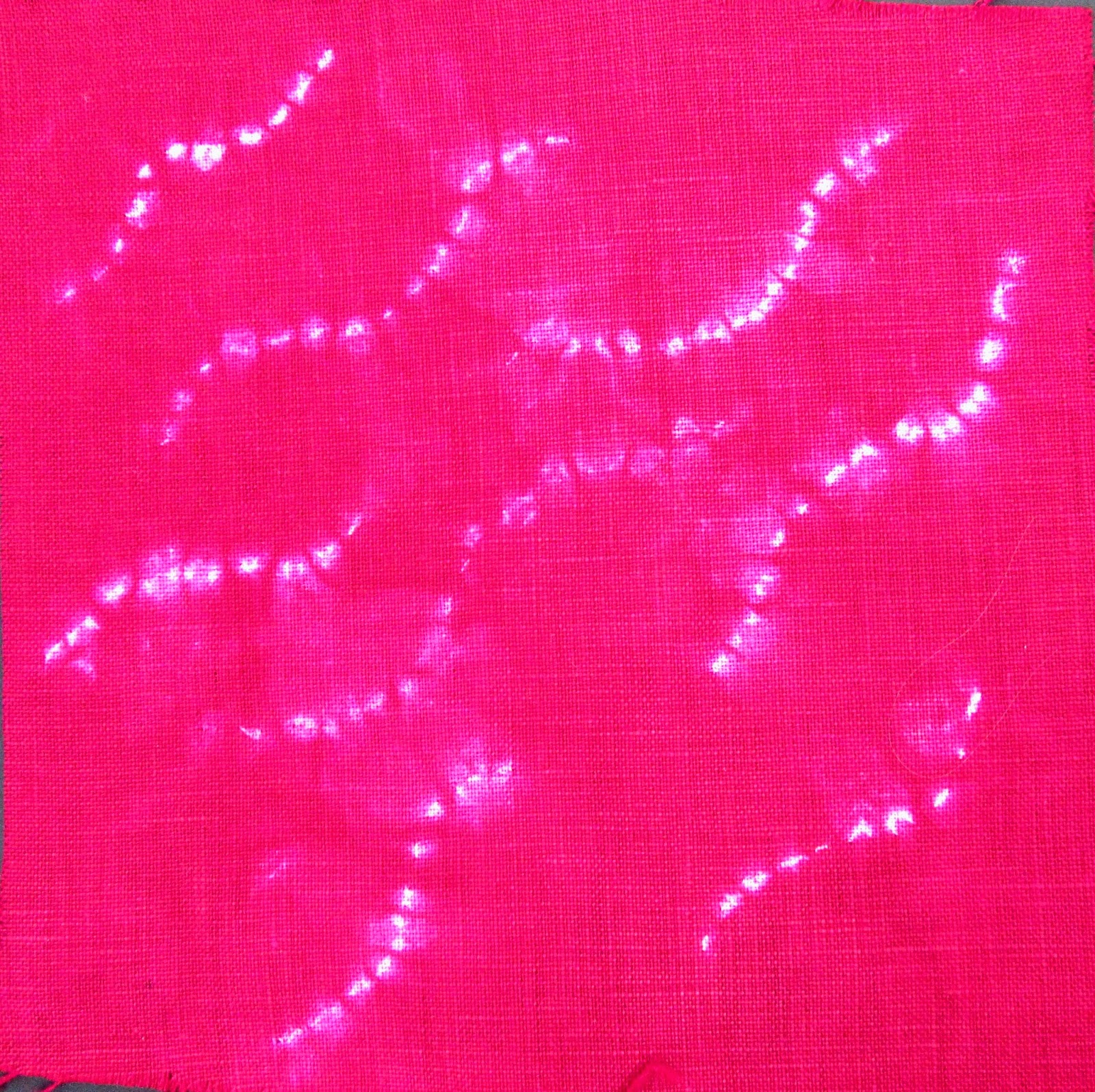 Curved flower -
The rayon fabric was folded in fourths and three lines of stitching were done. These were pulled up snugly and the resulting bundle was dyed in a blue and rust orange mixture. 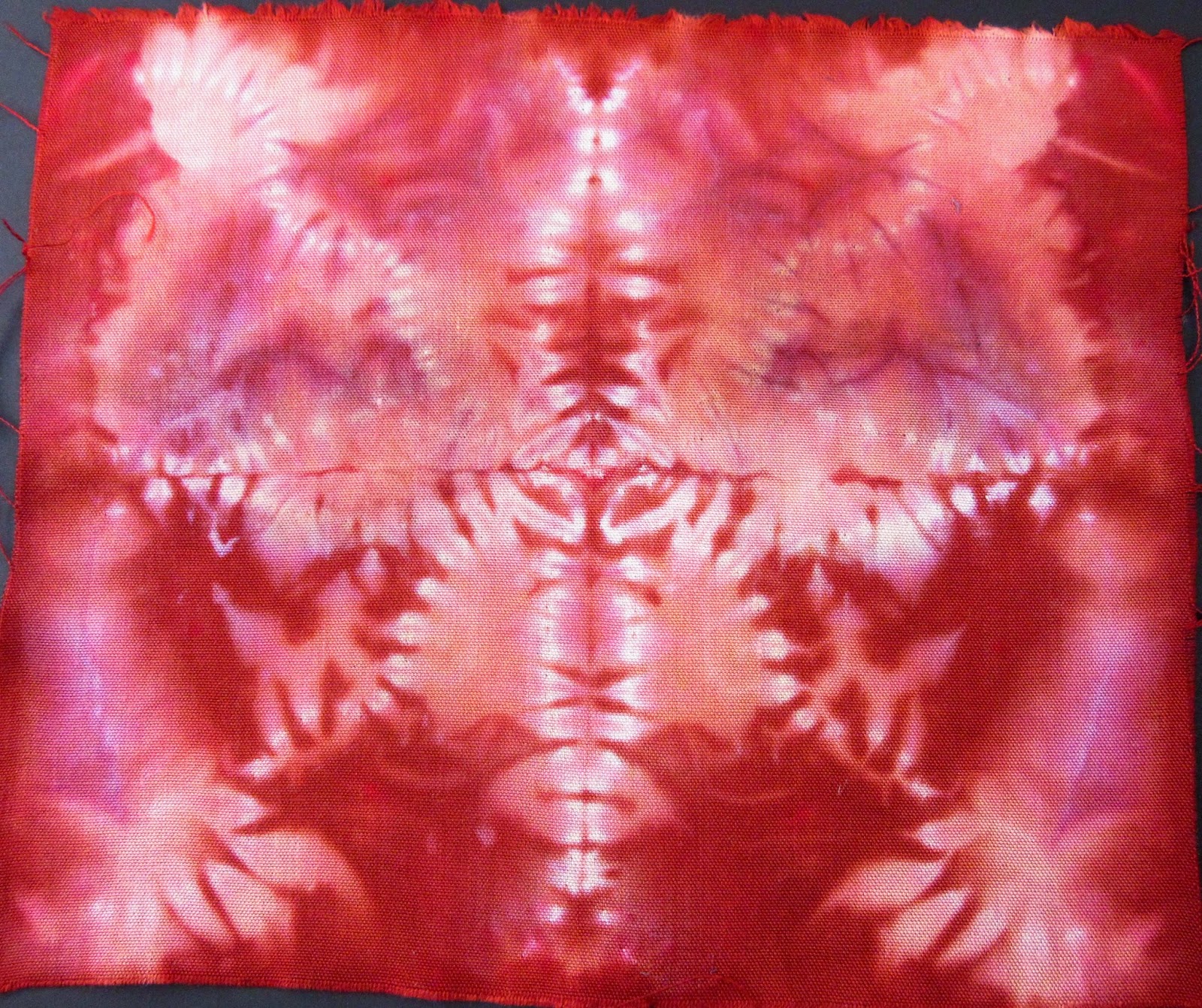 LEARNINGS FOR THIS WEEK:
·     ·          Fabric can be folded too thick. In the case of the raw silk and water
lines, a single layer would have given a more believable water line. In the
case of the curved flower, the design would  have been more appealing if
folded in half rather than fours. The tightly drawn lines  with the four
folds blurred some of the lovely curves. This was made on rayon. Trial
and error will dictate what is too much fabric.
·         Machine stitched resist is easy. It is not so easy to remove! Choose
stitches which will give impact. I did not adjust tension on the stitches.
·         Best results were obtained with rayon and linen for depth of color and
contrast.
·         My muddy scroll reminds me to choose the colors that you are
using together carefully. Other choices would have had much more impact.
·         If you wish to dye the sample in a specific dye color, mark it on the
fabric-  otherwise when the fabric is drawn up, you may not/will not
recognize it!
·        Curved lines made for more interesting designs than just straight lines.