Week 4 is area-enclosing stitched shibori, which according to "my interpretation" is the technique where the end and the beginning of the stitching are the same so that when the stitches are pulled up it gives an enclosed area. I couldn't find a clear description of this technique anywhere so if I am wrong about this, I hope someone will correct me in the comments sections. I believe that other stitching techniques can also result in enclosed areas, but I am unsure of this...some shibori stitching seems to fall into more than 1 category so it gets confusing to me!

Nonetheless, I was delighted to get to this technique for week 4, since it includes my absolute favorite shibori, makiage. Makiage is not just stitched shibori however, but is actually a combination of stitched and tied shibori so I am stretching the limits of the techniques we are supposed to be doing this month! I am hoping this is okay!!!

The technique is the same regardless of design size or shape and is shown in the collage below. I stitched around each circle on the drawn lines in a continuous line of running stitching for each circle(left photo in the collage below). I then pulled up the stitches tightly and tied the threads off for each circle. This left some fabric in the centers that "poufed" out(the "area-enclosed"). I took some additional thread (or you could use the ends of the thread used for stitching) to wind around this fabric "pouf" a few times. These threads are pulled very tightly and then tied off. The thread can either be wound spirally or in a criss-cross pattern, or for me, a combination of both depending how I managed to secure the threads. The fabric all-pulled-up-and-tied is shown in the middle panel. The combination of the stitched circle and the resist threads produces a lovely pattern, seen on the right:

These circles were small, only about 1.5 inches in diameter and didn't give much "pouf" to work with....but they were still big enough to produce the very distinct patterns in the fabric from the "pouf" typical of makiage. This was silk noil with colorhue dyes.

I also had done some of this stitching/tying on cotton which was then dyed using a pre-reduced indigo dye kit. But on a slightly larger scale:

These circles were done the same way as the smaller ones on silk, but they were about 3 inches in diameter. This larger circle gives more room to do the winding of the thread around the fabric "pouf". The large circle on the right is just a zoom-in on one of the circles on the left. Each makiage turns out differently so it is always lots of fun pulling the threads out and seeing what pattern emerges.

Finally a 10 inch circle..again with cotton and indigo:

Lots more room to wind the thread around the "pouf." However, there is so much fabric in the "pouf" that is hard for the dye to penetrate deeply, so there is often a lot of undyed fabric...but this also depends on how tightly and how closely together the winding is done. The photo on the right shows a detail from the whole circle on the left.

There are variations with the winding and tying that can be done. For example, a part of the "pouf" can remain unbound to form a dyed stripe:

The stitching was done on the outer circle only...the inner circles were guides for doing the second stage of binding the "pouf". The stitching is shown in progress on the left(it needs to be completed to get back to the beginning!). In this example, the small inner and large outer areas had thread wound around, tightened and tied, but the middle area was left free. The unbound area shows up very nicely dyed, but still with a bit of resist due to the folding(scrunching) on either side of it. This was done on silk noil with colorhue dyes and the circle is about 5 inches wide.

Designs other than circles are possible too. And lots of fun to try!

For instance, I did 2 leaf designs.... running stitch around the outside of the leaf and then winding and tying thread around whatever fabric "poufs" up. As expected, this gives very unpredictable dyeing and resist patterns. This leaf also had some stitching along the fold for the stem, and I placed a couple of drops of blue dye on the "pouf" hoping it would blend with the overall green dye(but it just formed blotches!). This leaf which is about 4 inches long was done on silk noil with the colorhue dyes:

I also made a second slightly smaller leaf, using silk habotai and colorhue dye. The thinner habotai made it easier to pull up the "pouf" for the thread winding and tying: 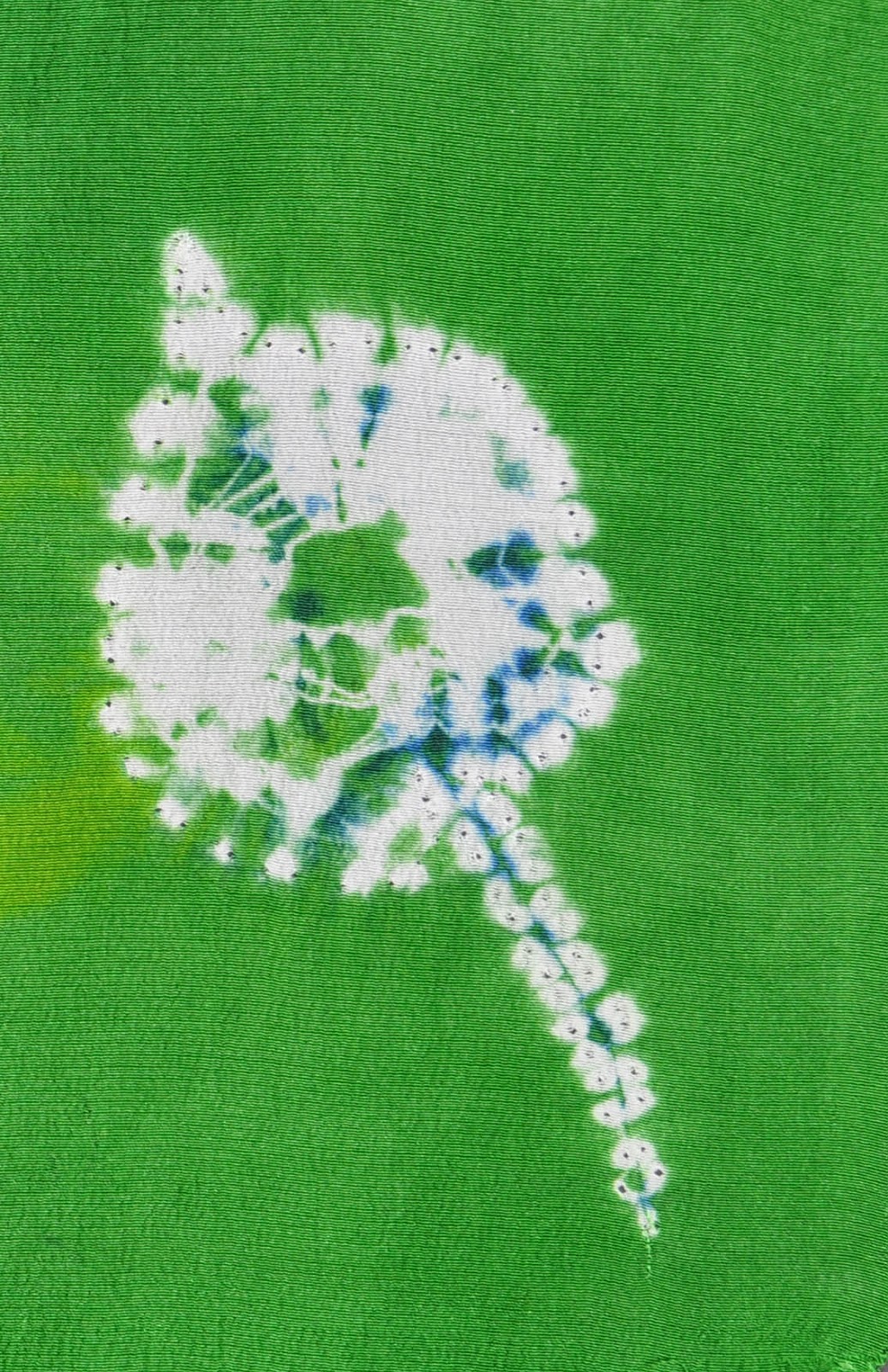 Again, there was some stitching on the fold to create the stem and some extra drops of blue dye.

The possibilities for this stitch and tie resist are almost endless and I hope these examples have shown you why I love this technique so much!!


I found that I had lots of little shibori pieces from this month of trial and error. I like to combine projects together and since I had just bought the 2014 Quilting Arts Holiday magazine, I decided to make one of the projects using my scrap or small shibori pieces. I chose the "Gather your Sewplies Project Bag" by Melanie Testa. It makes a small bag that hangs around your neck(and loops around your back) to hold all your hand sewing supplies...she carries her supplies for embroidery but I thought that this bag could hold most of my stitched shibori supplies: scissors, threads, needles, seam ripper and frixion pen as well as some small fabric pieces. A small spray bottle of water to moisten the fabric before the final thread tightening would probably fit too. 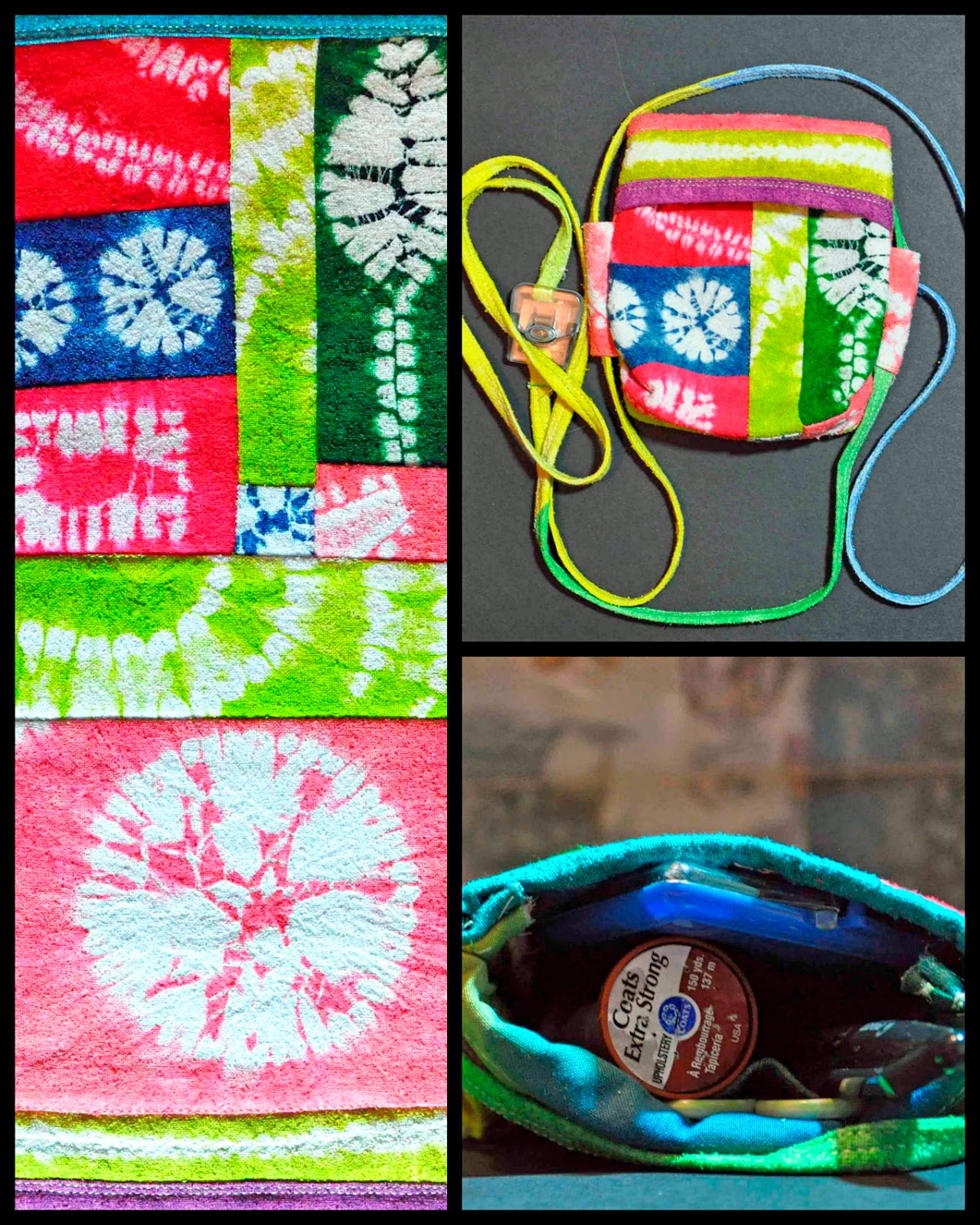 The photo on the left shows a patchwork of silk noil shibori pieces for the body of the bag. It includes a red piece with a square-shaped area makiage design that didn't work very well! When I was making this patchwork piece, I had intended on using the "large" salmon pink makiage piece on the front and just make the back half out of the tiny pieces. However I liked the patchwork of the tiny pieces so much I decided to use them as the front instead. The completed outside of the bag is seen in the upper right while the inside of the bag is shown in the lower right. Very easy to make...and very useful too!

So that is it for me. I had great fun playing with all the shibori stitching and again I want to thank Nienke for including me in the month of posting.
Posted by marsha at 6:00 AM