Hello! I am Sheila Fowler and I live in Canada. My home is in Victoria, British Columbia. I have been dyeing since early in the 2000's. I also enjoy quilting, crafting when there is time and card making. All of these interests come together using what I create with dyes. My other passion is tap dancing that I do with a group of seniors. Quite a work out and mental challenge.
At present I am cruising to San Diego on a Holland America ship and presently am somewhere off California. It is an amazing experience, as is being able to post to the blog from the ship as I travel. My husband and I are enjoying "alone" time in a sea of people. No phone, no demands, no schedule - life is good!
I love preparing for expected results with MX dyes as well as the marvellous serendipity of random dyeing. I try to document what I have done to create the results I have obtained. I am not always successful as I tend to be impulsive. Under statement! Shibori has been a recent interest of mine and I was delighted to be challenged by Neinke to participate. I will be posting my warts and all. Not all of my results were good ones. I would like to think I have learned much from my less fortunate results. 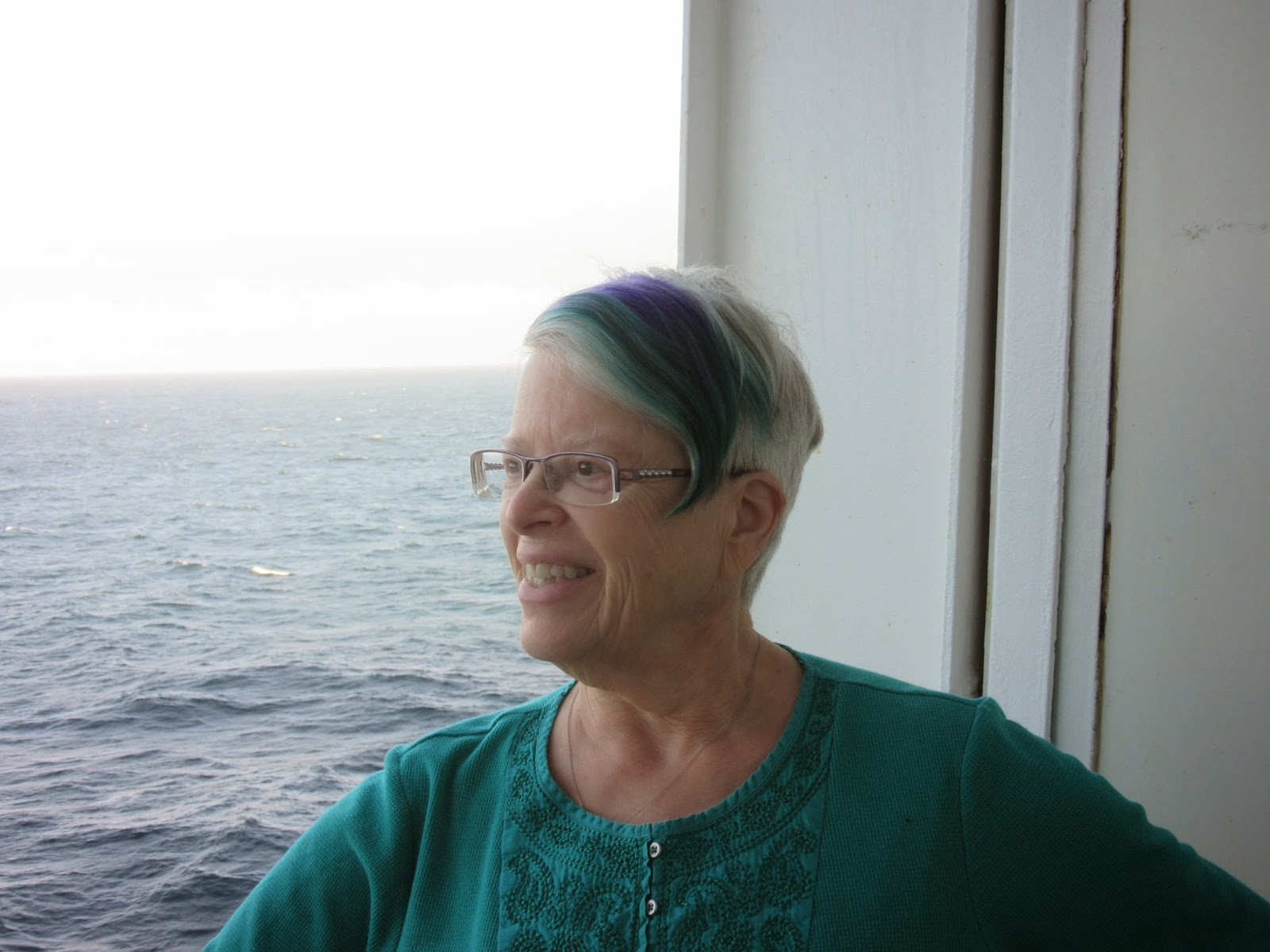 SAMPLE 1
Sample 1 of straight lines was a maze that I created on pre-dyed fabric using my Janome Gem. Although I set the stitch as a large one, it was difficult to draw the whole maze up snugly. In the middle, I had to pull out the threads and pull from there as well. 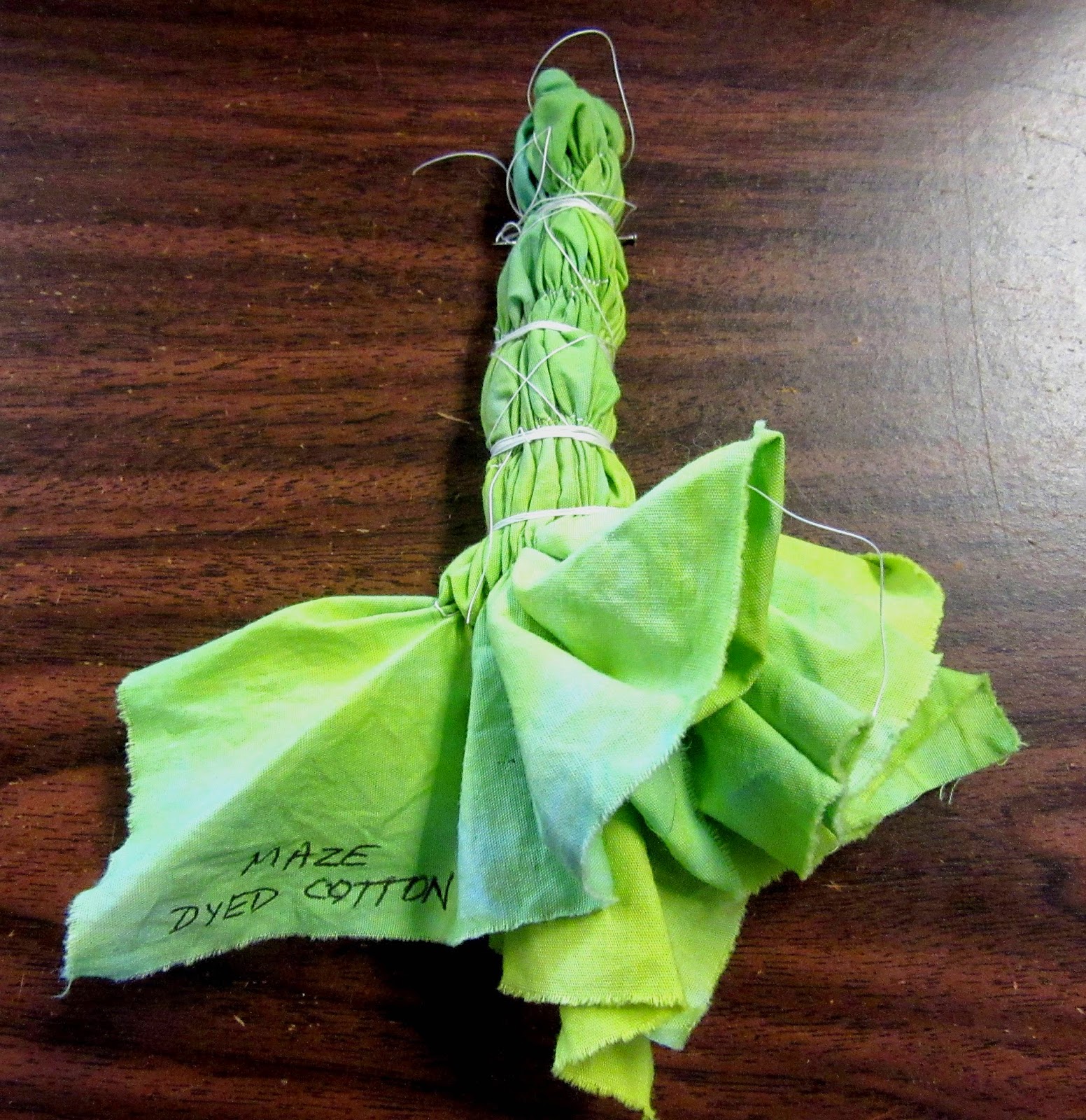 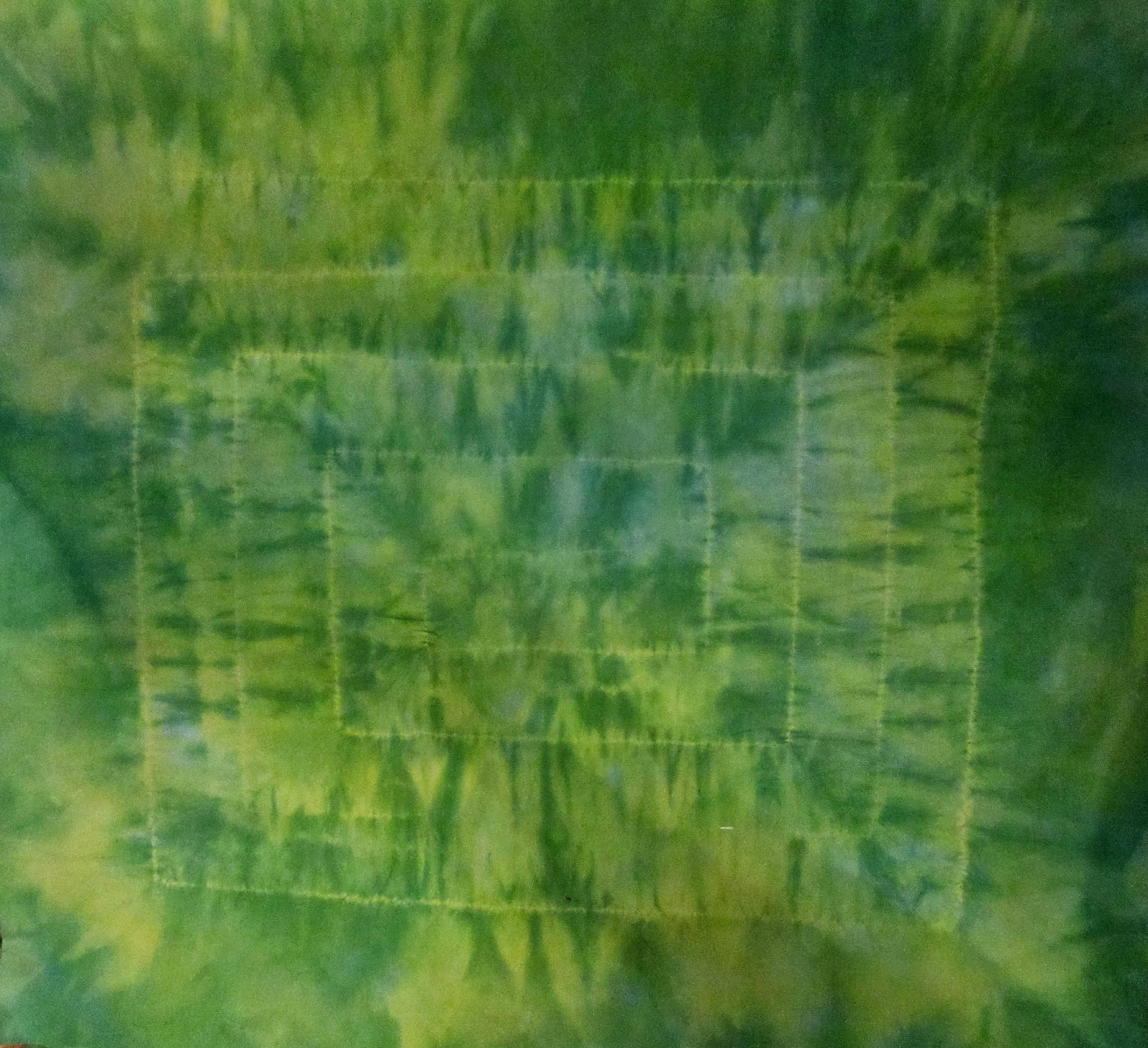 SAMPLE 2
Sample 2 was prepared using a large (fat quarter) of cheap muslin. Because it was thin, it drew up well. I was too excited to stop and take a photo of the lines I created prior to drawing up the piece. The lines show up fairly well on the finished piece- including the one that was not pulled tight enough. The thin fabric did not work well in some of my experiments as the dye overwhelmed it. I used color hue dye to test the process. I did folded lines, whip stitch lines and parallel lines. 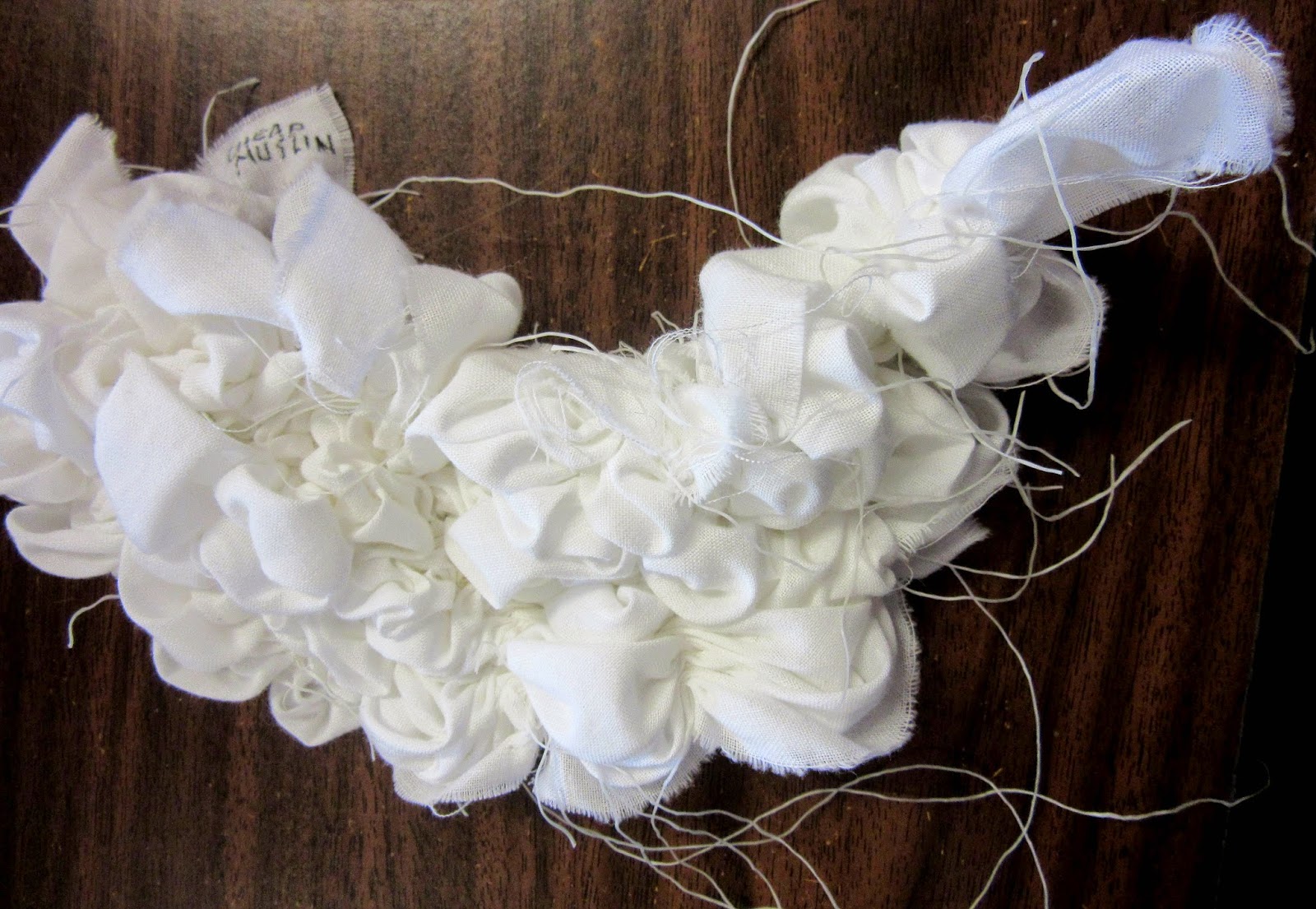 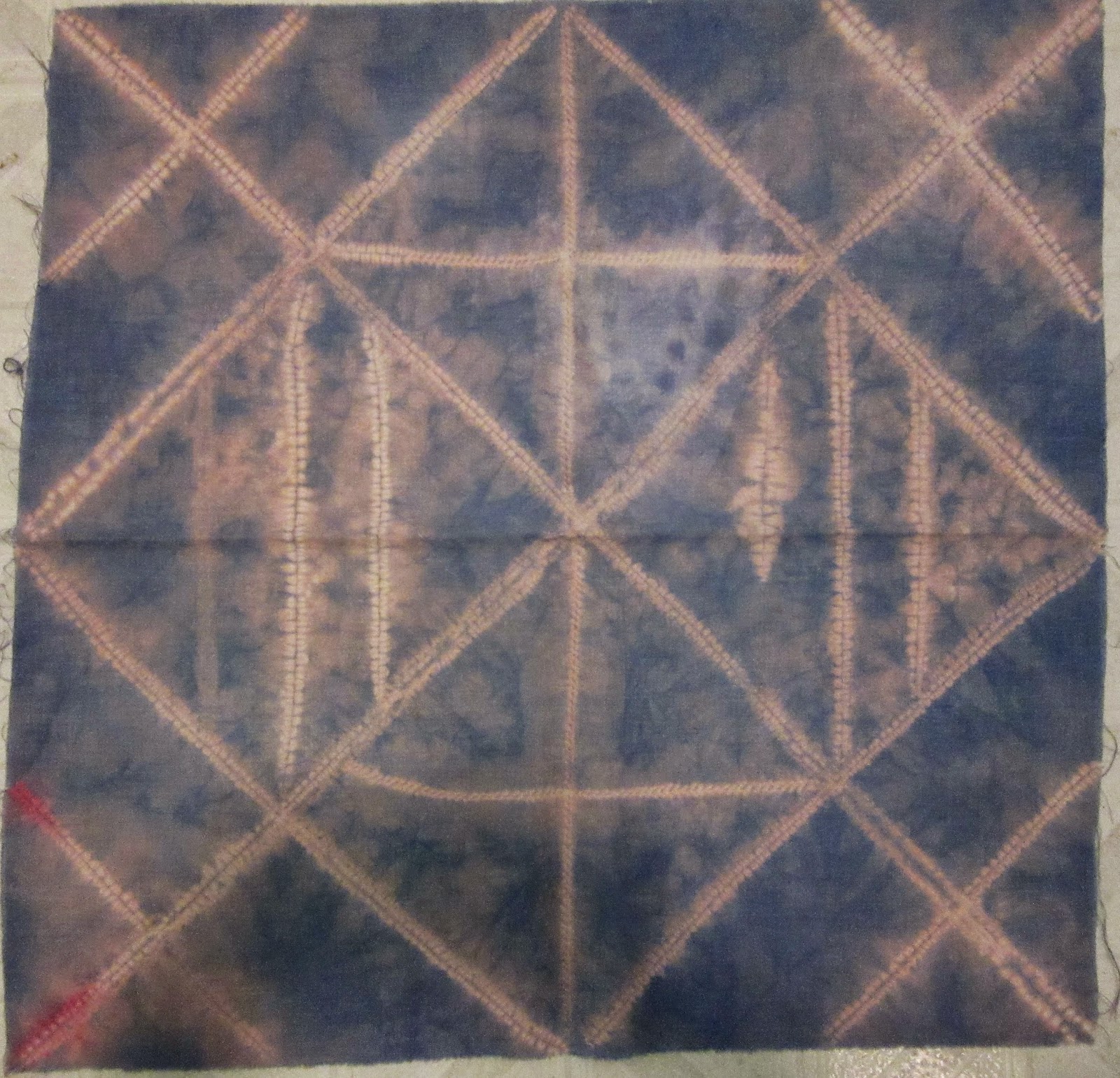 SAMPLE 3
Sample 3 - straight lines
This was another case of being is a hurry to draw up the work.
I used a pre-dyed piece of yellow cotton and MX dyes. 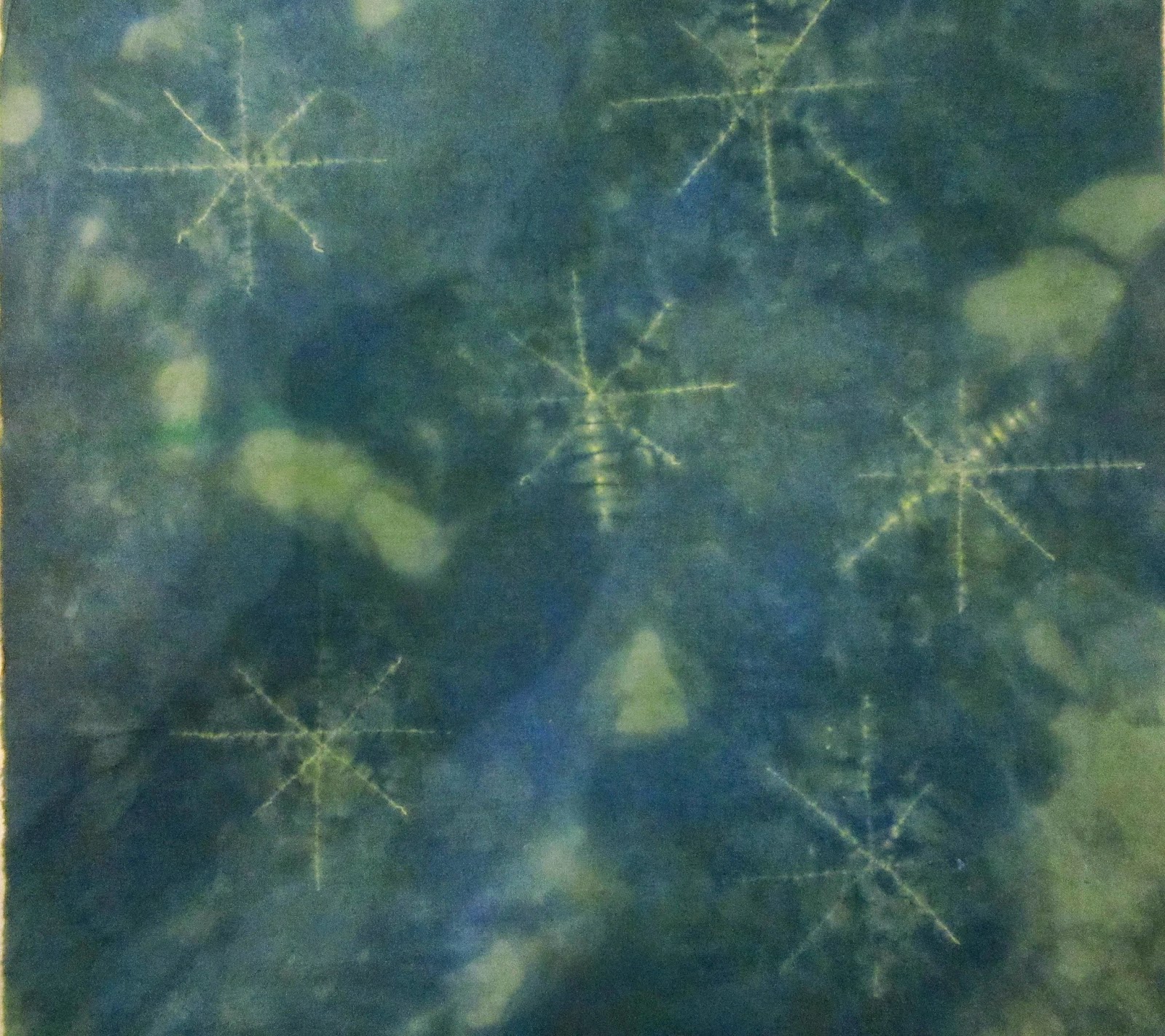 I stitched large stitches on my Janome Gem. My idea was to create stars on the background that would be dyed Blue. Two close lines would give more definition to the stars. Hand work would likely give more definition.
I feel this technique is definitely worth trying again with some modifications. Flowers also could be created this way. And crosses, and X's and random straight lines for a background.

SAMPLE 4
Sample 4 was a piece of rayon, folded in half, and then folded to the center and stitched with a zigzag on both sides of the fold. I used a piece of rayon .
Here is the rayon all drawn in and ready for the MX bath.
The result is quite nice from my perspective!
This opens the possibilities to using other kinds of folds and then doing the stitching on top of the folds...  or folding both sides into the middle twice rather than folding in half to begin. Different results are guaranteed. 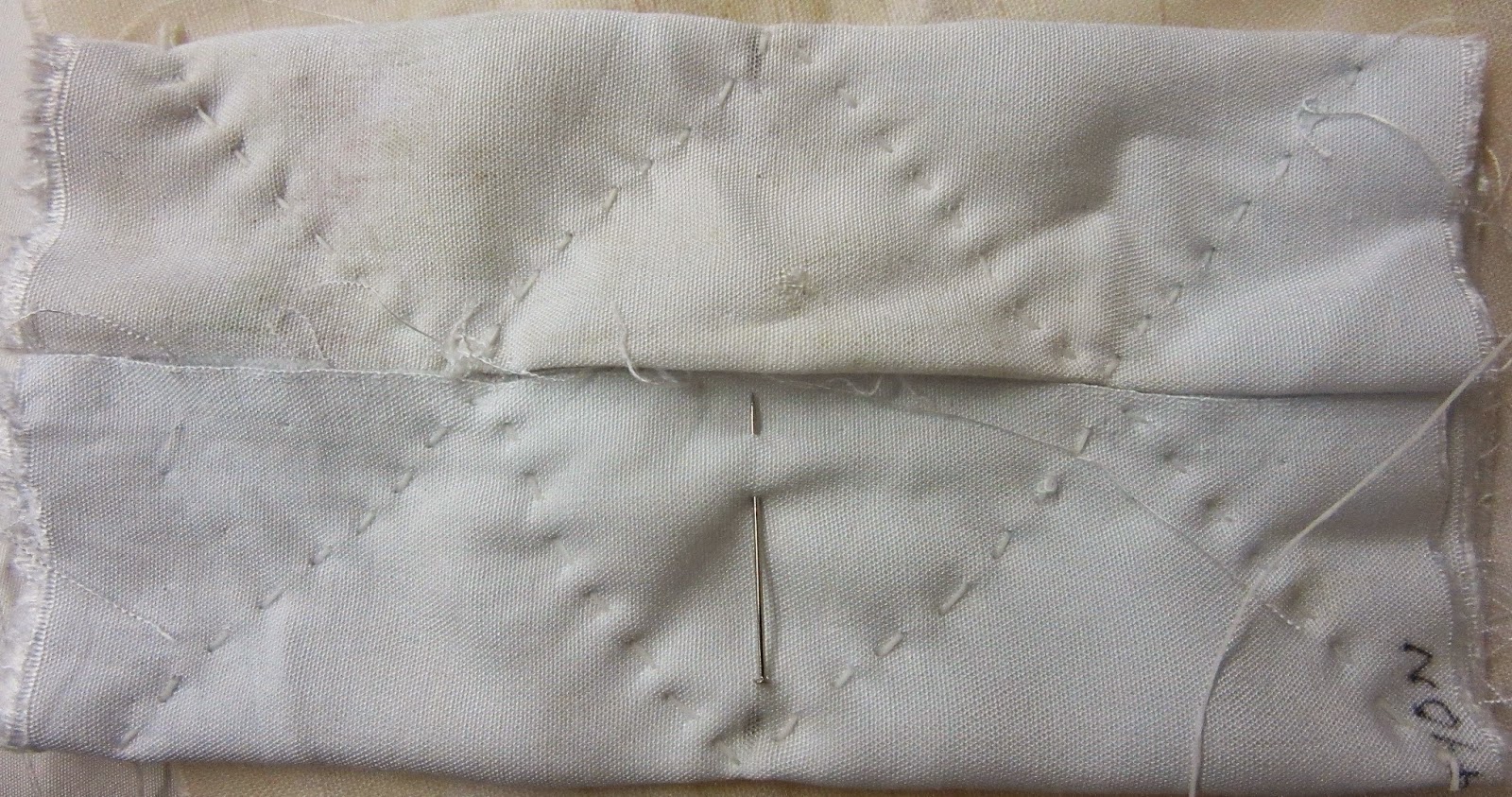 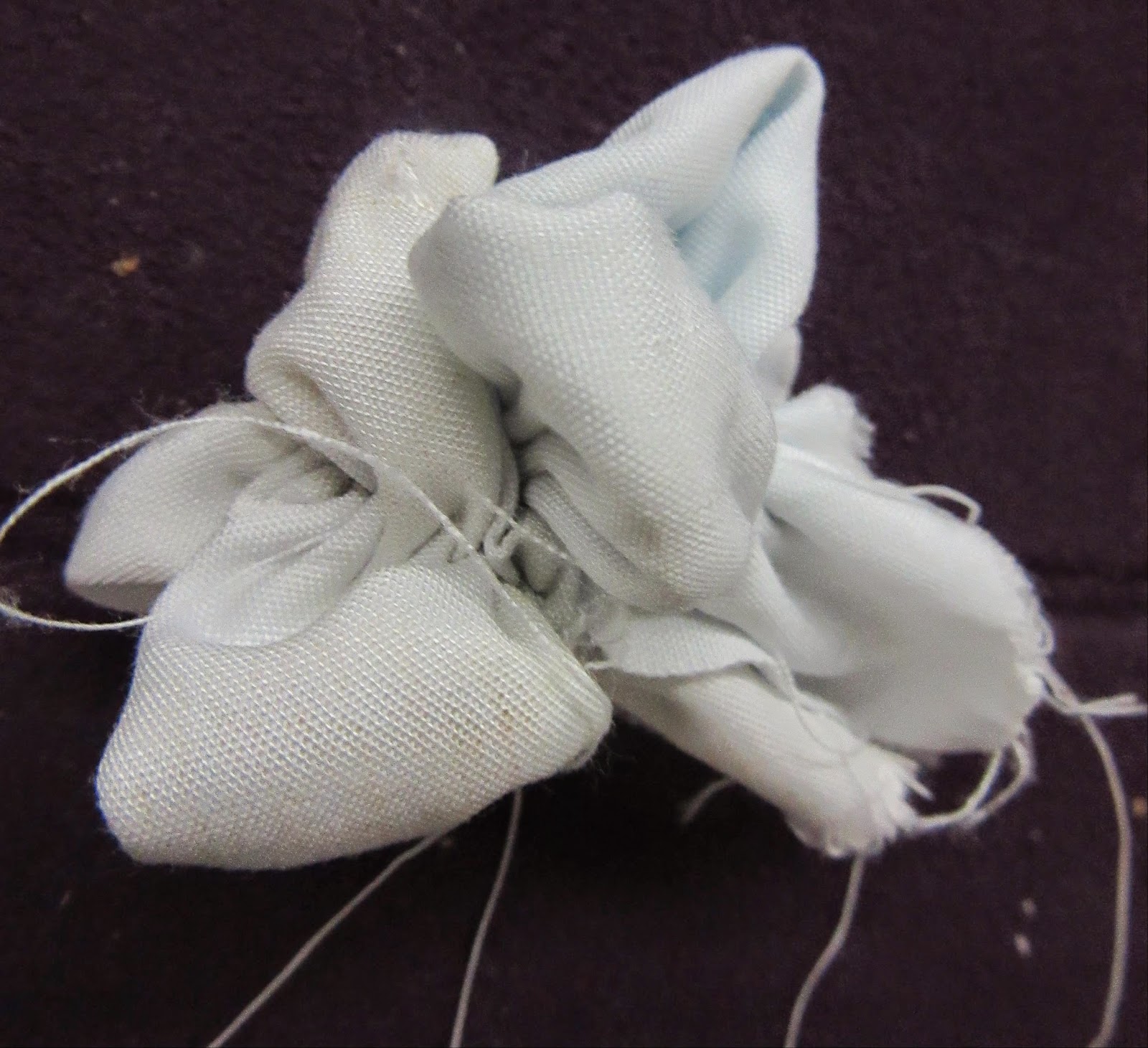 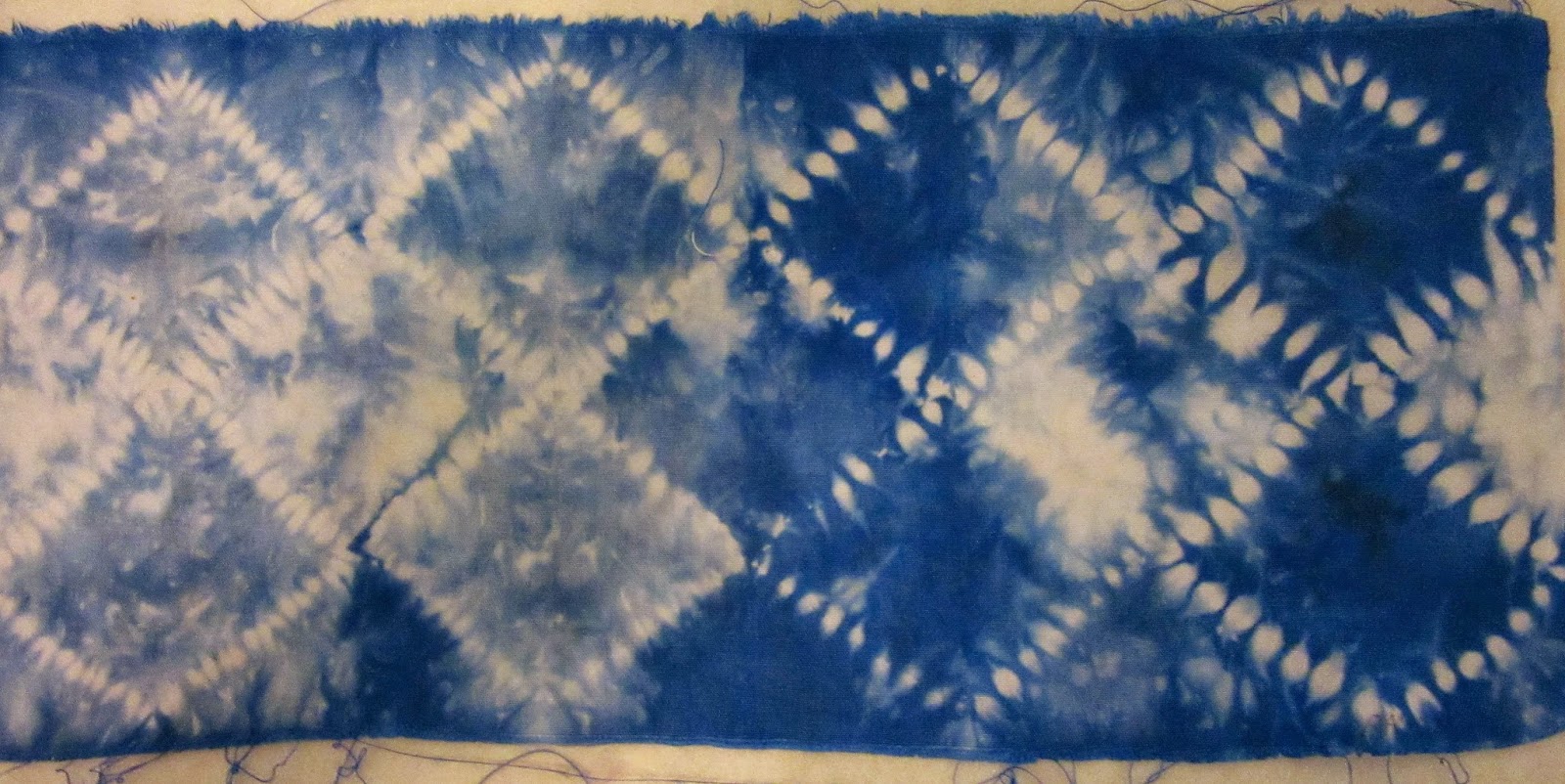 SAMPLE 5
This sample was created on whisper thin linen. The first result was disappointing as it was difficult to pull the threads tight enough. 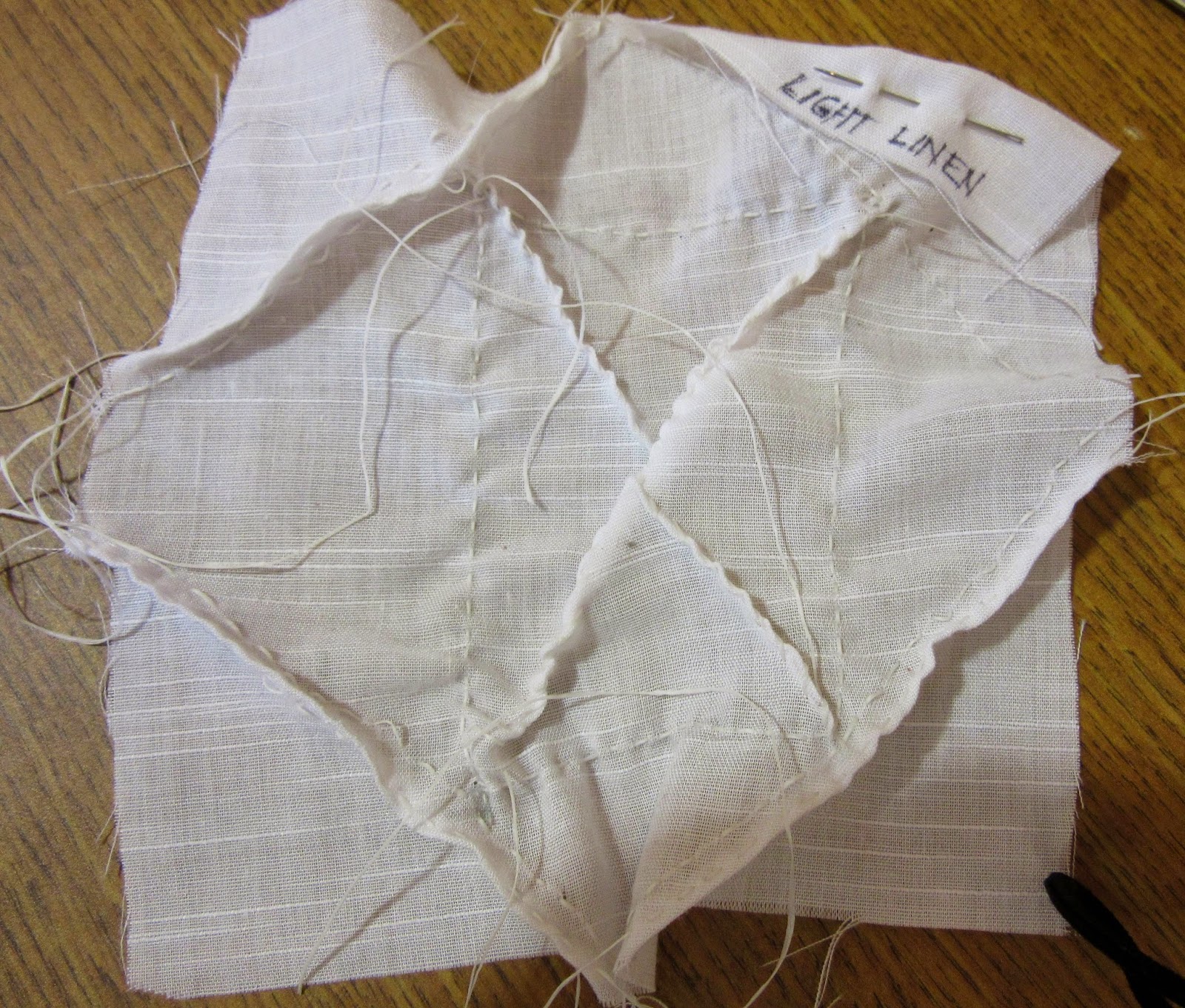 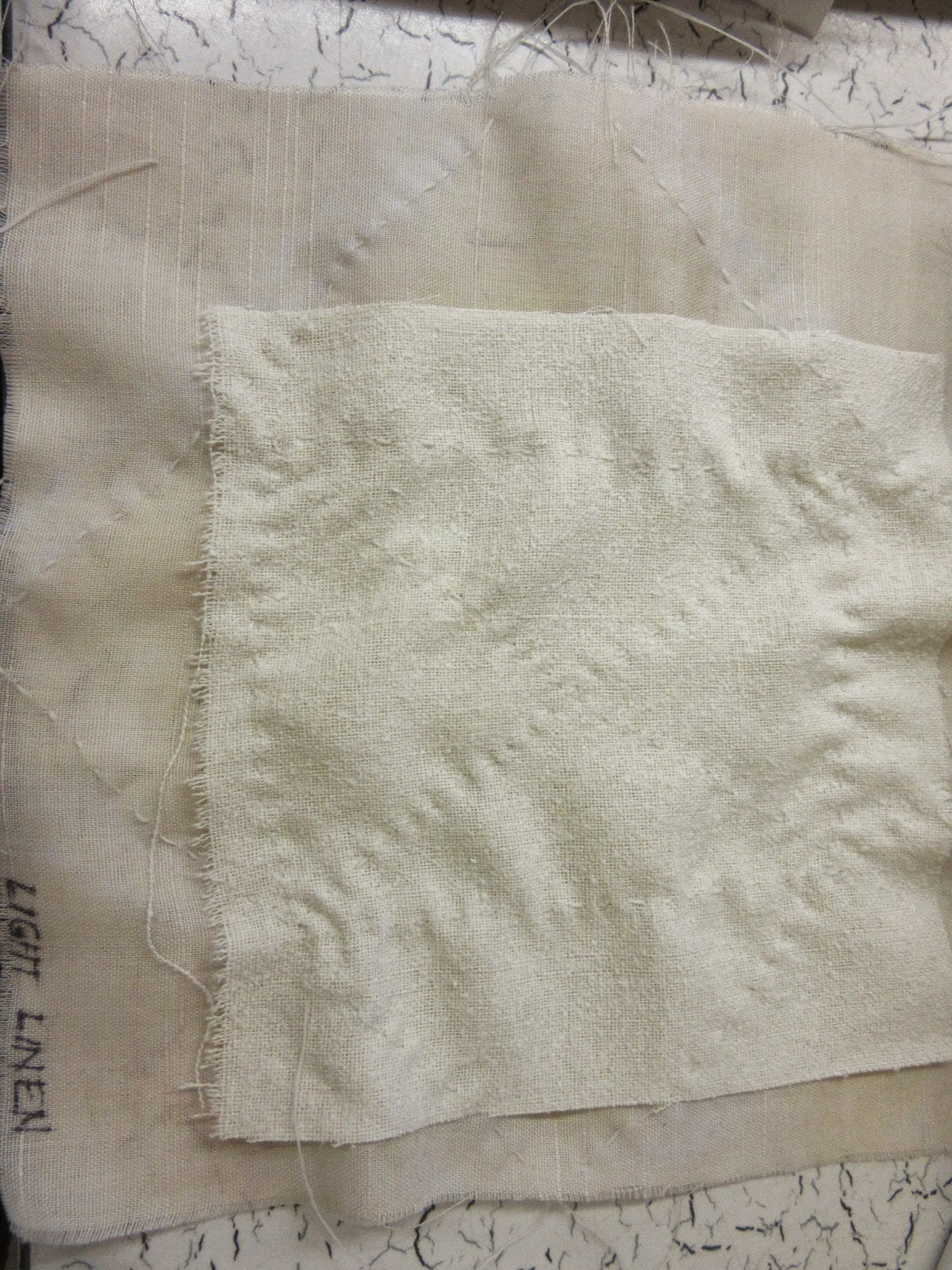 Take 2 was putting a piece of raw silk on top of the linen and drawing it up again using the folds from the lines from the first attempt. The lines would have been straighter and more accurate had I drawn them a second time! 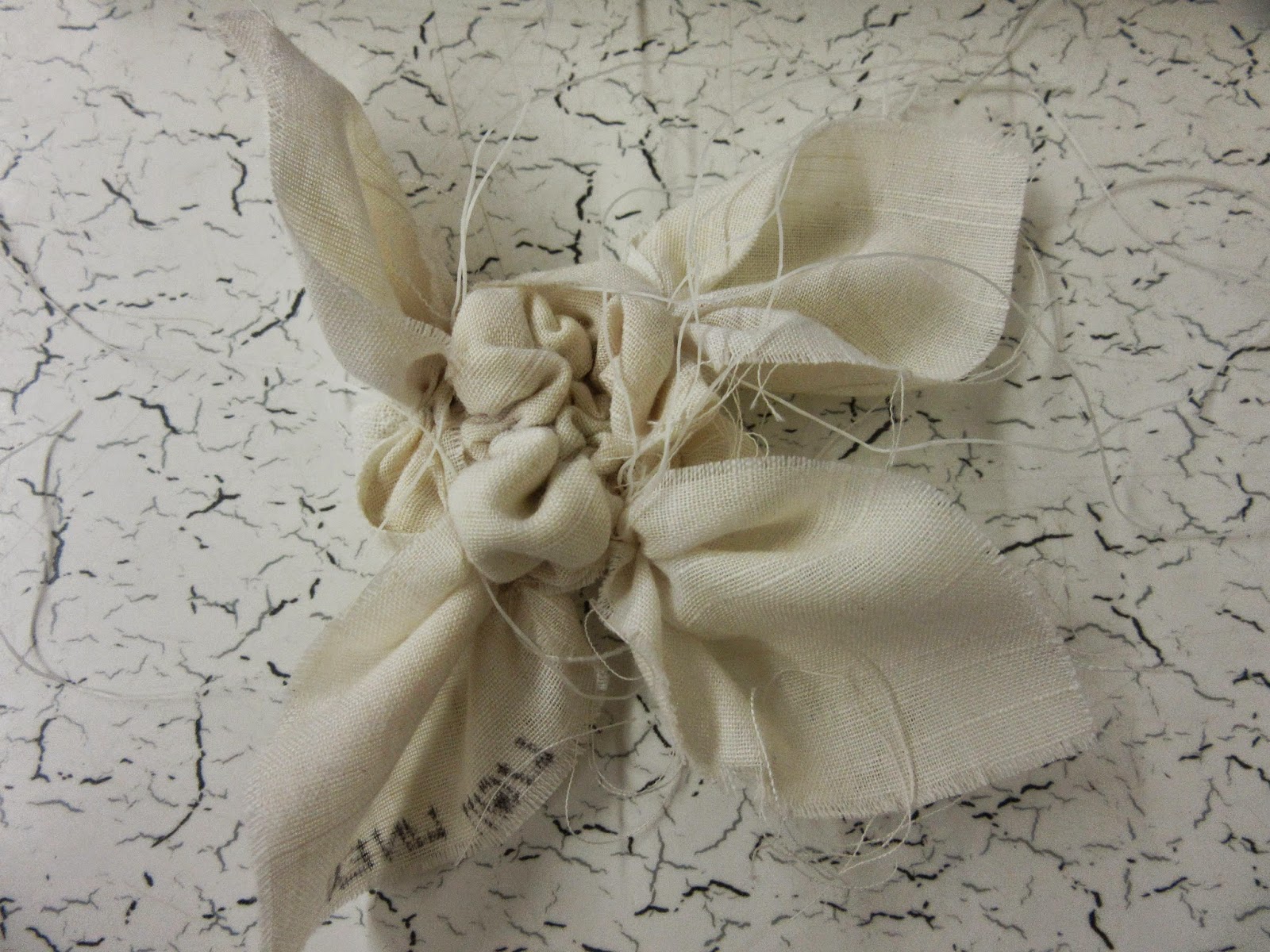 Here is the double layers drawn up again and ready to be dyed. I used Jacquard Antique bronze. The silk greedily grabbed as much dye as it could and the thinner linen took up far less. 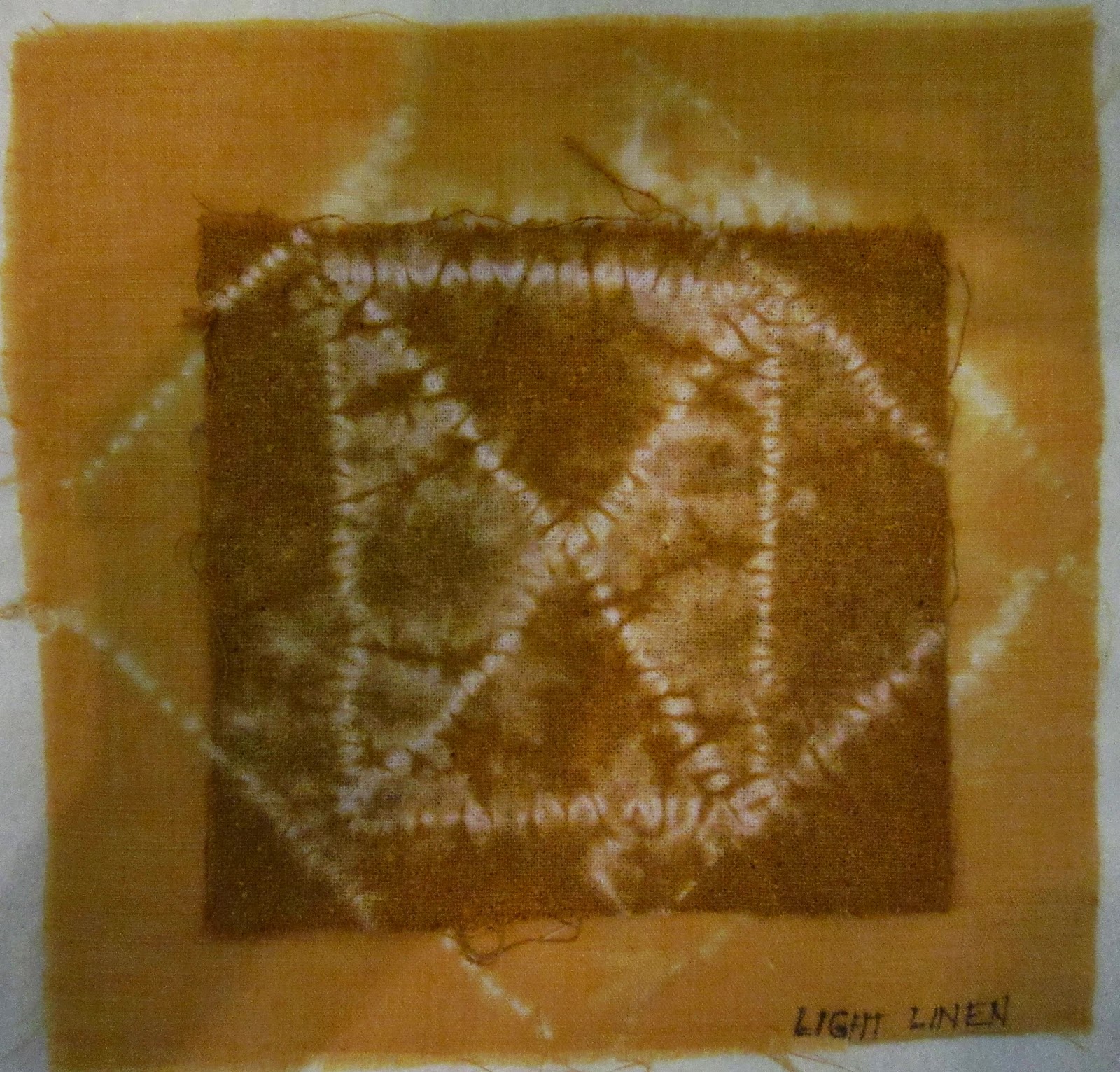 While the sample is still disappointing, it does show the possibility of using two pieces of different fabric in a single drawn sample. Now the question begging to be answered is whether the fabric would have taken up dye differently, had the silk been on the bottom and the linen layer on the top of the bundle. Another experiment to try!


SAMPLE 6 - China Silk
I cut a piece of silk about 8 inches by 40 inches. This was folded in a zigzag fashion five times. Again I moved too quickly into drawing up the sample before taking a photo. 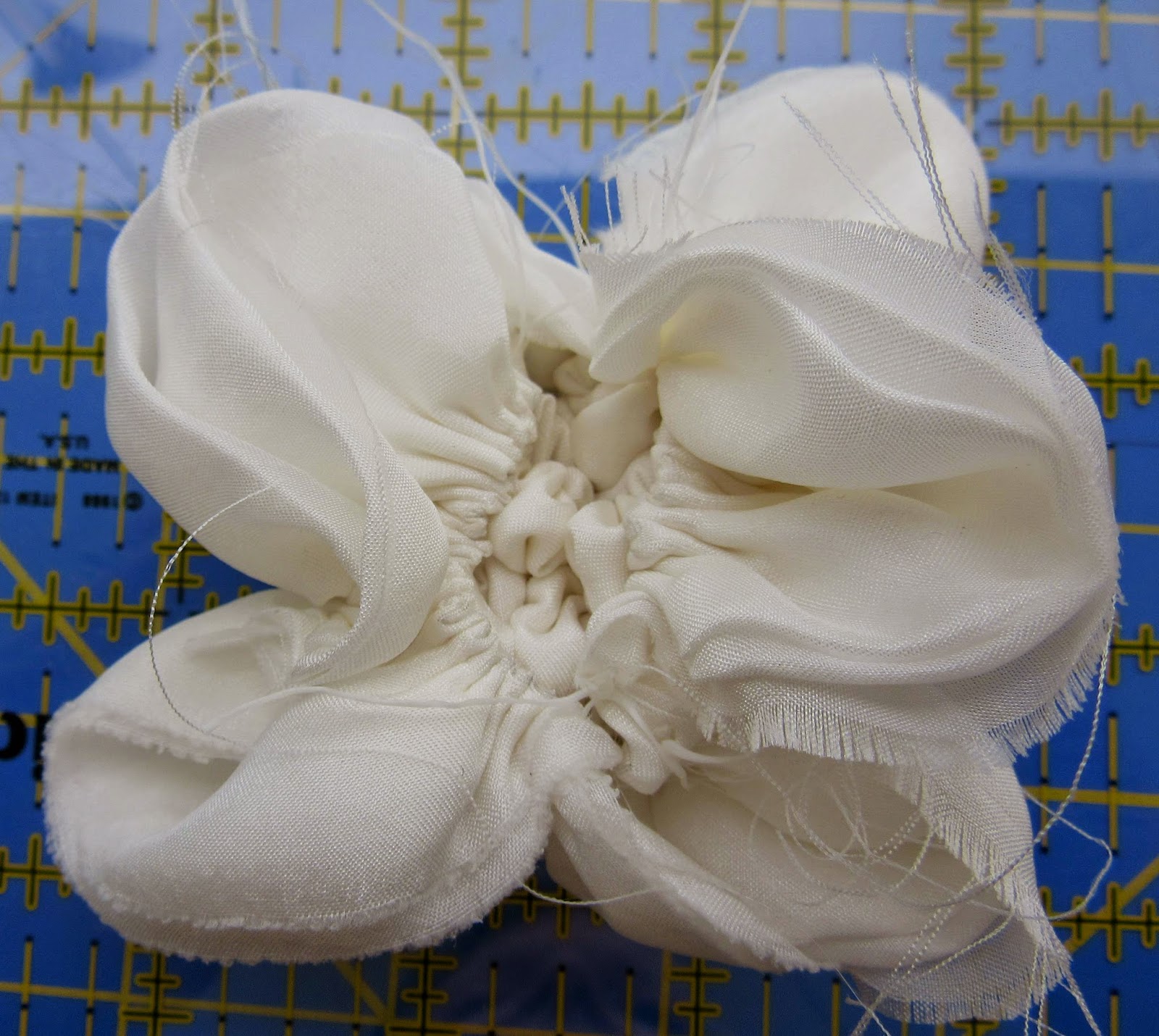 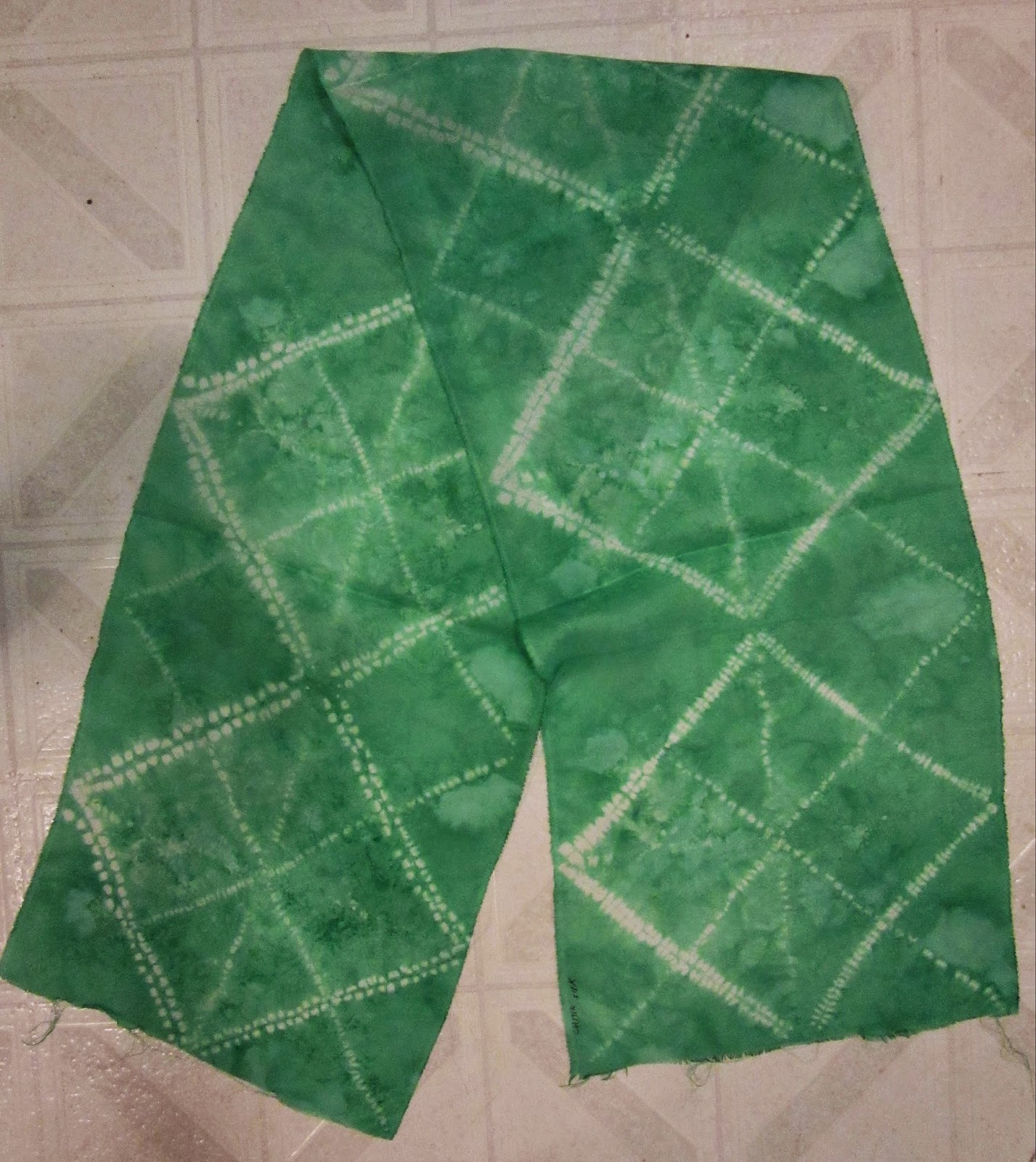 I dyed the silk after soaking in vinegar, and used my dedicated microwave to help set the dye. The large square on point was stitched on the fold. The "X" through the block was a single line of stitching. The stitching went through all the layers of silk. I will now hem the scarf to have it ready for use.

And that is it for week one.
LEARNINGS:
ü  Thinner fabrics don't always work. Double or many layers worked better for me.
ü  Rayon and raw silk are greedy and dye darker.
ü  Machine stitching gives a less distinctive result.
ü  Using double lines, stitching on the fold and using a wrap stitch all product more distinct lines.
Draw up shorter lines first - otherwise they disappear or become obscured under the longer pulled areas.
Happy dyeing! And stitching your resists!