Elle  is our guest blogger today... again she has done a great job! She has taken  the concept of texture and ran with it. She how she has used texture to enhance her work... Check out
Elle at Mother, may l marry? 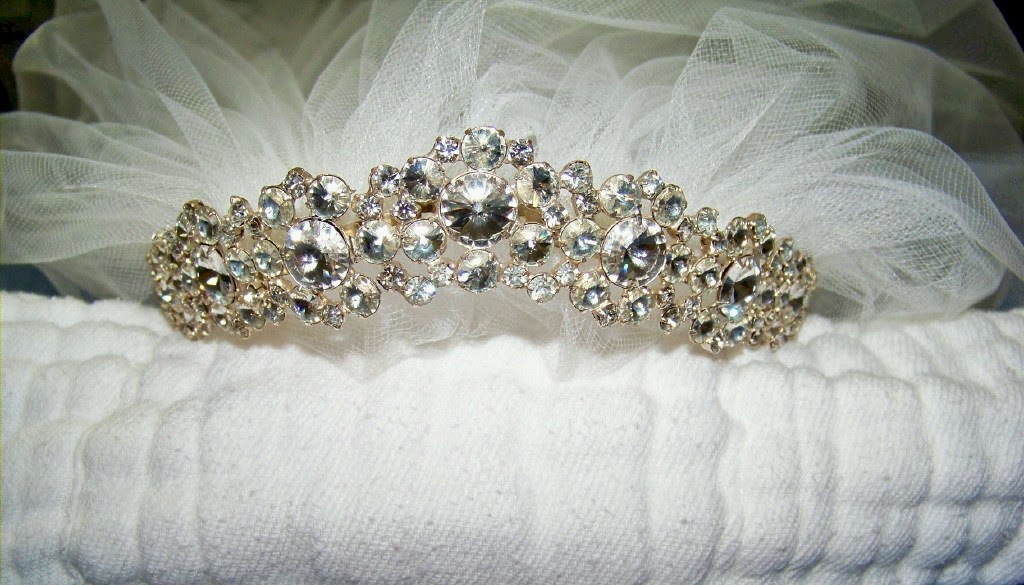 (noun) - Texture, an element of art, is used to describe either the way a three-dimensional work actually feels when touched, or the visual "feel" of a two-dimensional work.

In the visual arts, texture is the perceived surface quality of a work of art. It is an element of two-dimensional and three-dimensional design and is distinguished by its perceived visual and physical properties. Use of texture, along with other elements of design, can convey a variety of messages and emotions.

Texture refers to surface and is in fact surface. Everything that has surface has texture.  It can be 3-D, tactile, touchable.  It can be 2-D, visual, an illusion.  Texture makes things interesting.  Texture can be felt or it can be seen as light skims the surface revealing the texture.

I hope to use both kinds of texture as I work on my mothers and daughters memory pages and honour them as the princesses that they are. 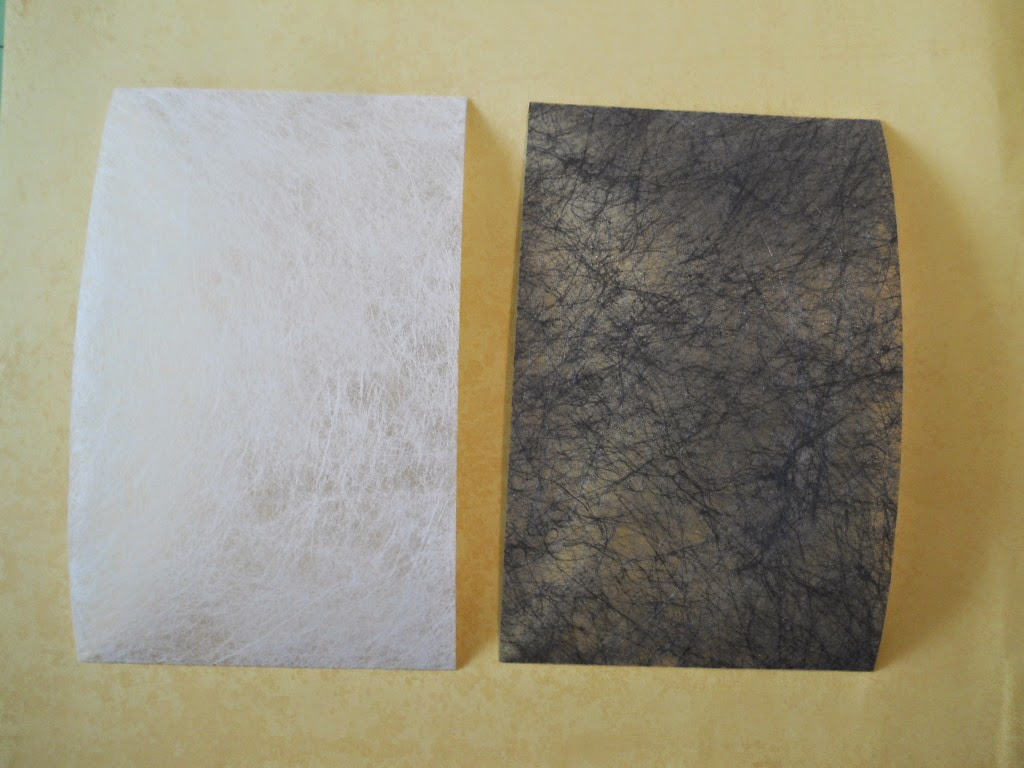 Lutradur has texture.  It can be seen and felt. 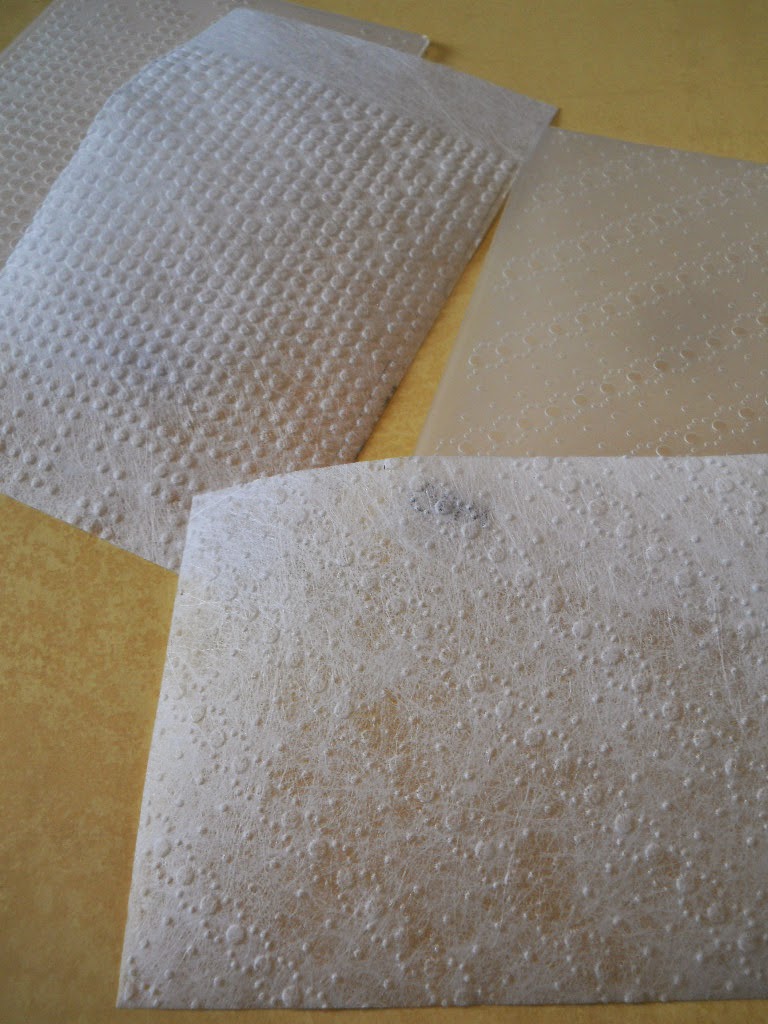 Lutradur can be run through an embossing folder and die cut machine.  More texture. 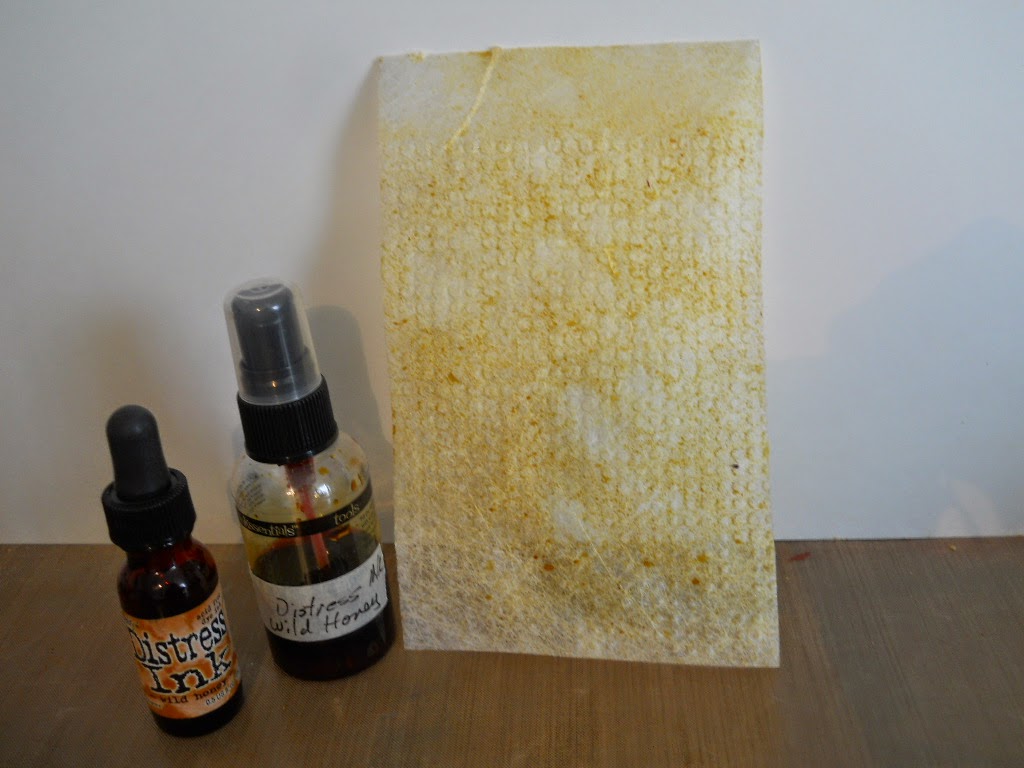 An ink spray will not add texture because it soaks into the fibres that already show texture. 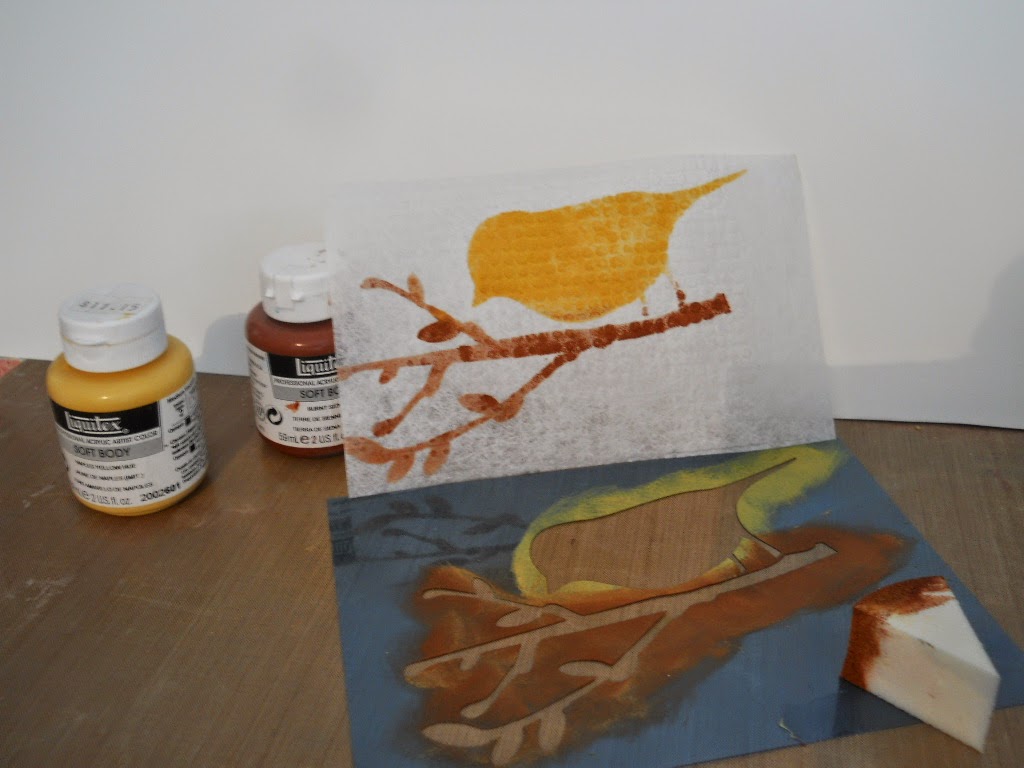 But paints lay on the surface and if applied thickly will add texture.  This example has a thin layer of paint that adds a matte texture because it obscures the fibres. 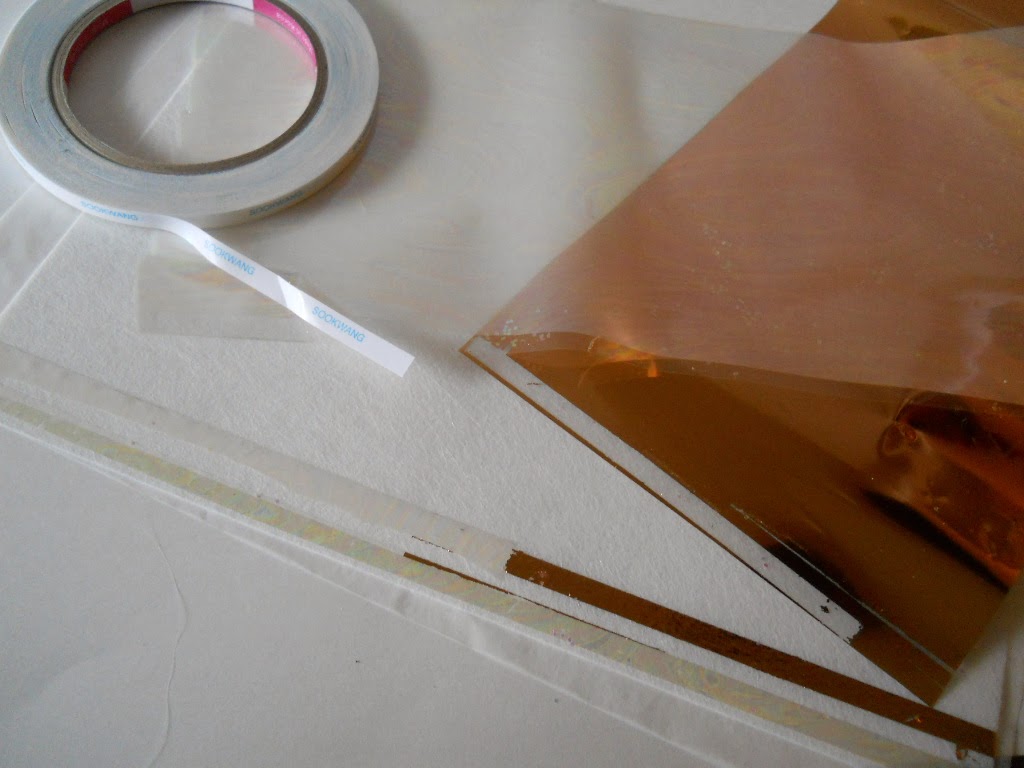 In keeping with flat techniques, foils add 2-D shine.  I tried double sided tape.  The first bit was an example of how not to apply foil.  The score tape holds VERY fast so there was no second try.  :O  I imagine that one could make their own washi tape or even Lutradur 'ribbons'!. 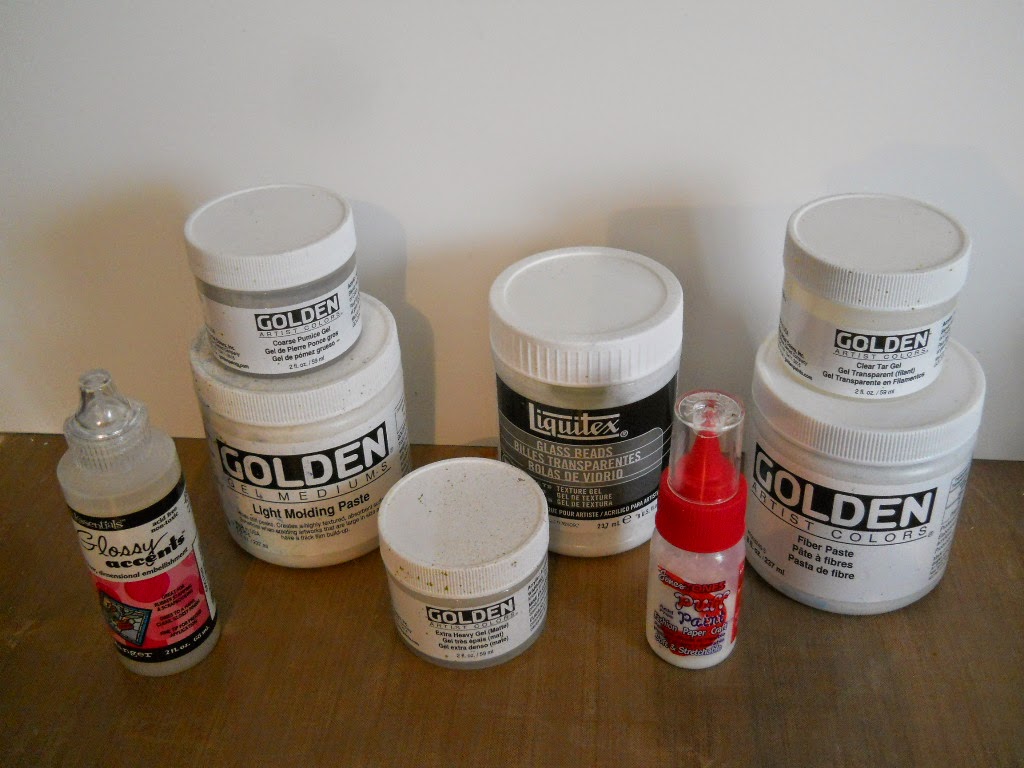 But then there are all the wonderful products that are actually formulated to add texture.  Tactile texture.  I have a small sampling of Golden products to try. 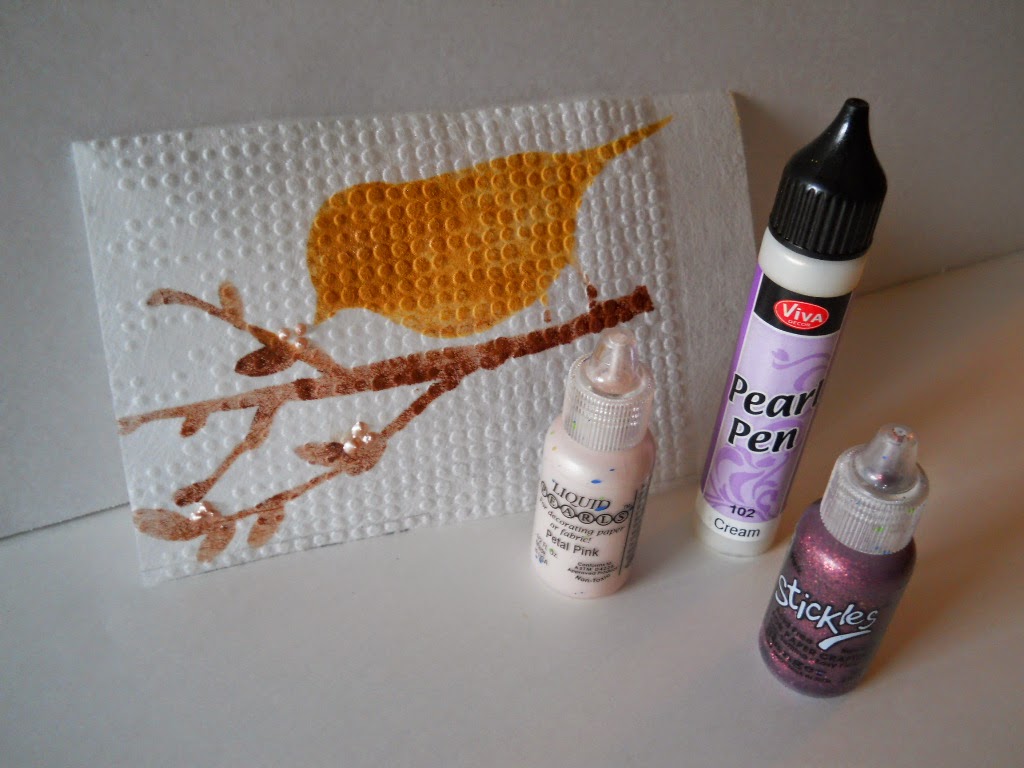 The dimensional paints are lightweight and grab the Lutradur easily when they are dotted on. 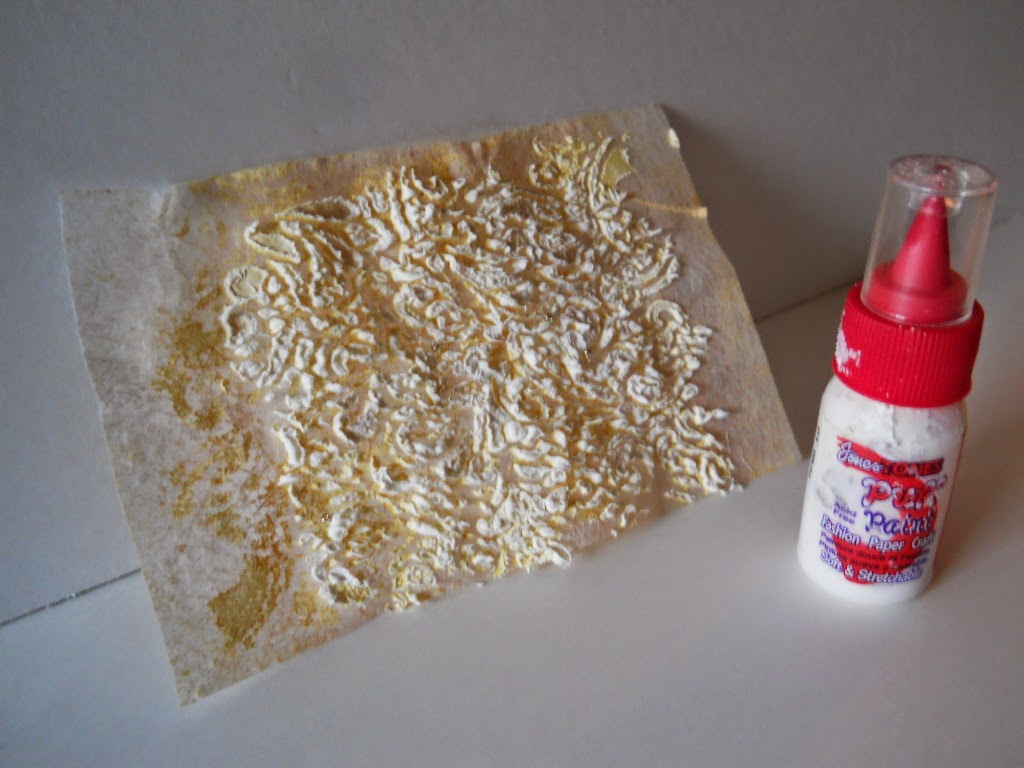 My wee bottle of  Puff Paint was old so I ended up spreading a glop of it through a fine stencil.  Then I used a heat gun on the front and on the back.  This produced a very cool (hot) happening because the close heat dissolved some of the light weight Lutradur  and added a lacy effect that isn't really showing in the photo. Another surprise was the how little actual weight there was to the finished product. 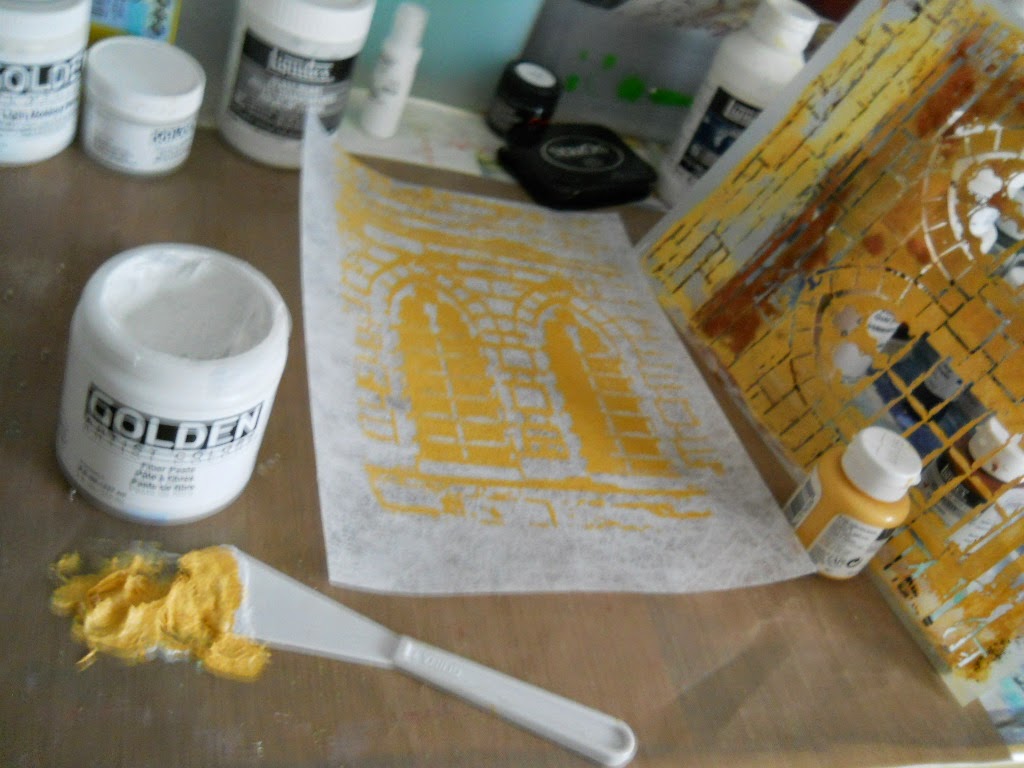 I coloured  fibre paste and used it through a stencil on some Lutradur that already had an image stenciled printed on it. 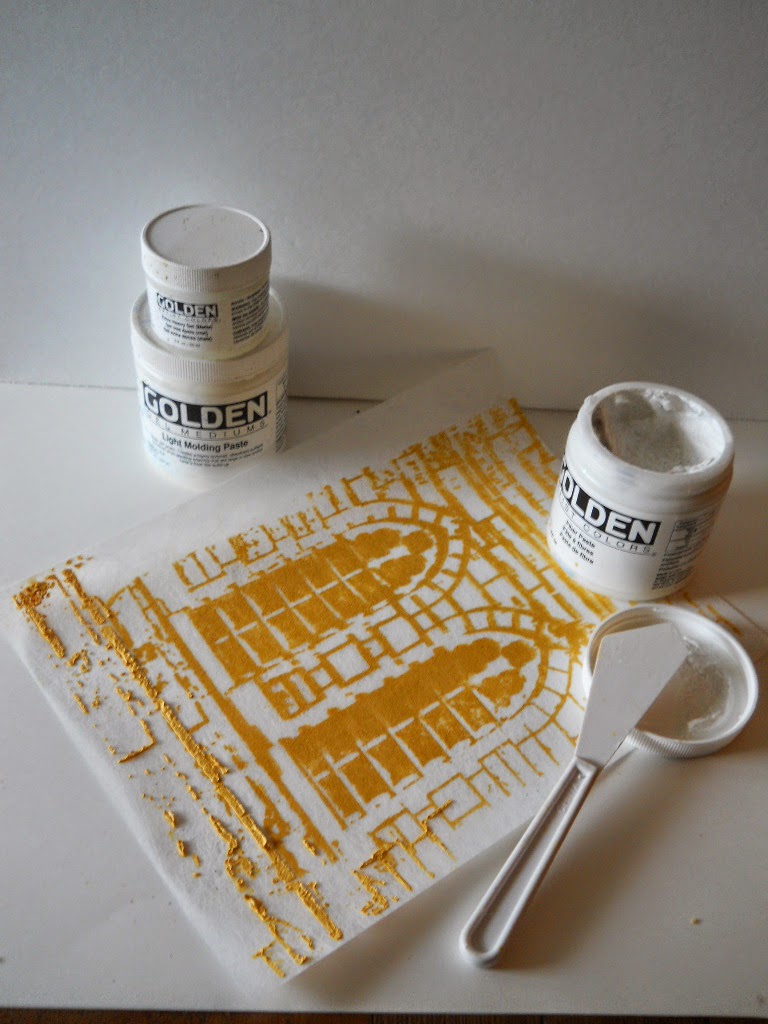 The fibre paste enhanced the rough brick look. My sample jar of coarse pumice gel would have done something similar I imagine. The molding paste and the extra heavy gel would have been smoother.  Good for snow drifts or wedding cake icing.  :^) 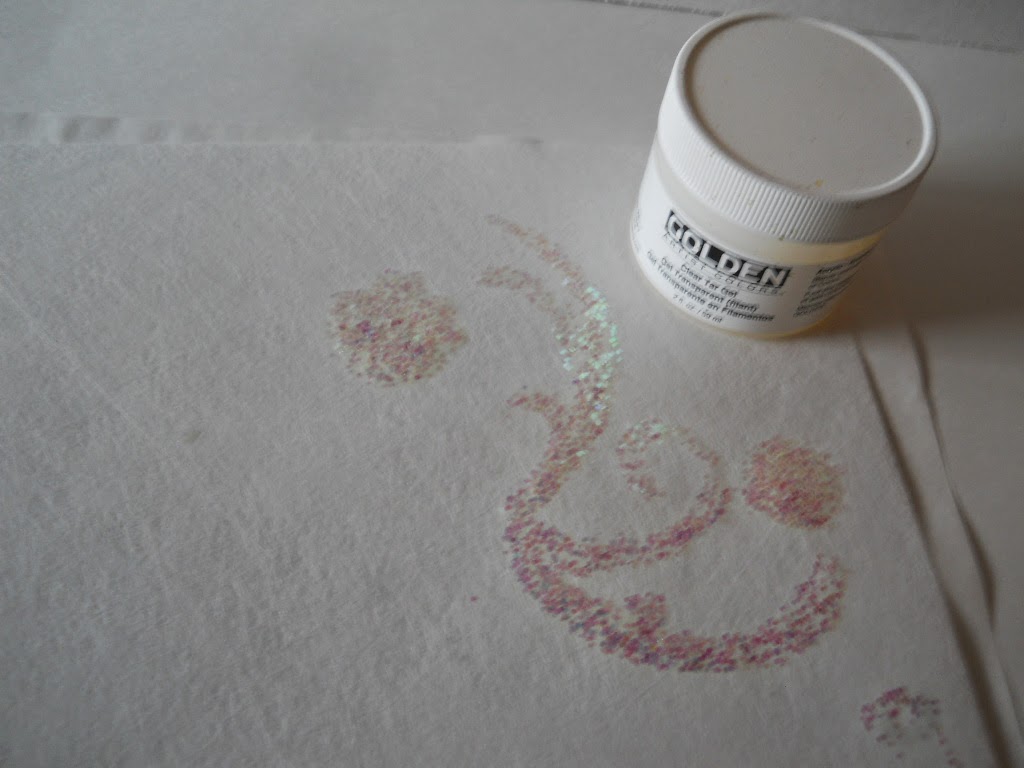 My first try with the clear tar gel revealed that it is a thick but runny substance.  I tried confining it to a stencil but it 'relaxes'.  It would make a good drawing substance, again like icing squeezed from a cake decorating tip.  I did sprinkle some glitter on before it dried. 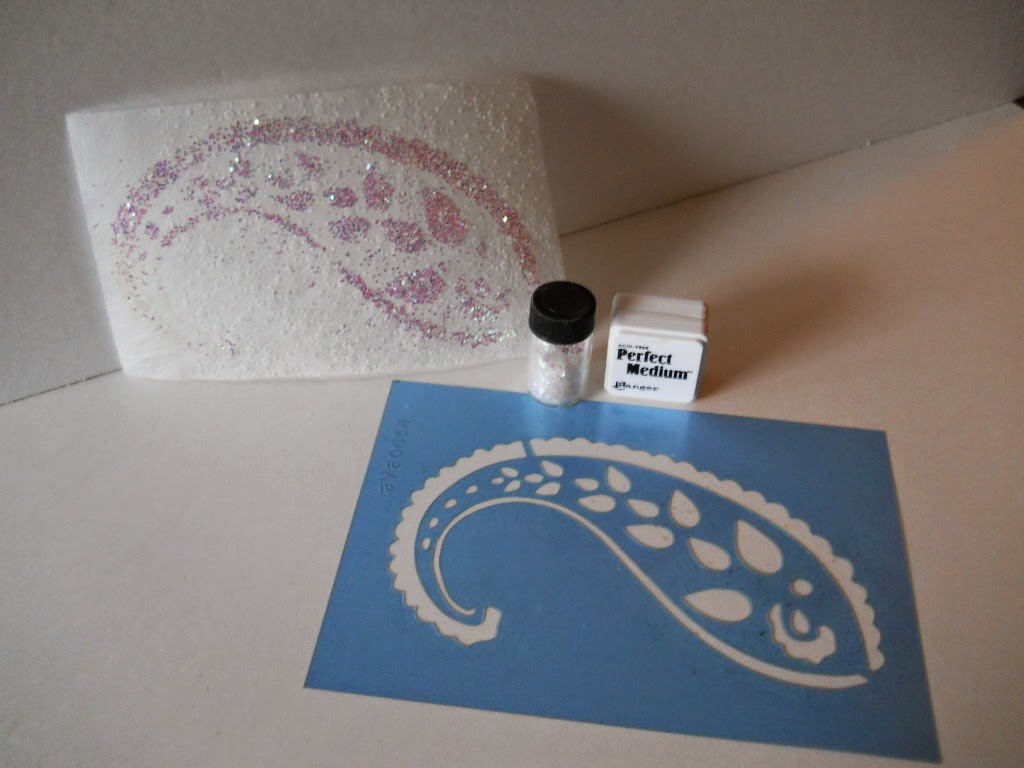 Embossing products do the same thing but with a flatter effect.  Again I sprinkled glitter on. 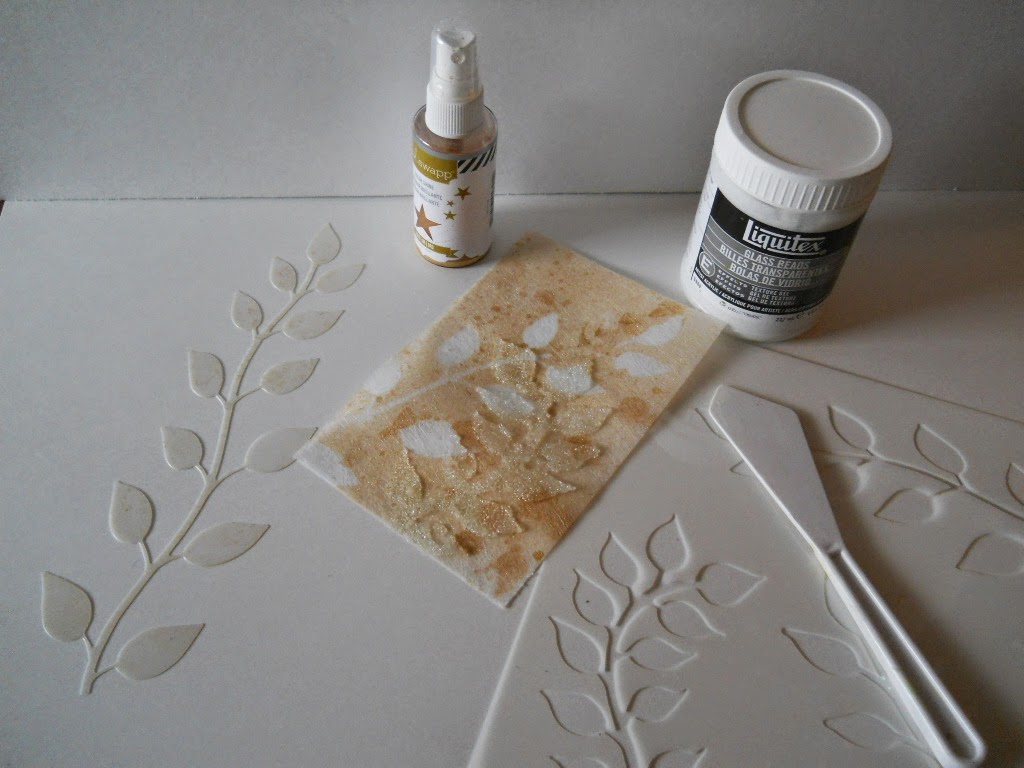 This example uses both kinds of texture.  I used the leaf mask and over sprayed.   When it was dry I smeared the glass beads through the stencil.  Masks and stencils with the same motif more than double creative options! 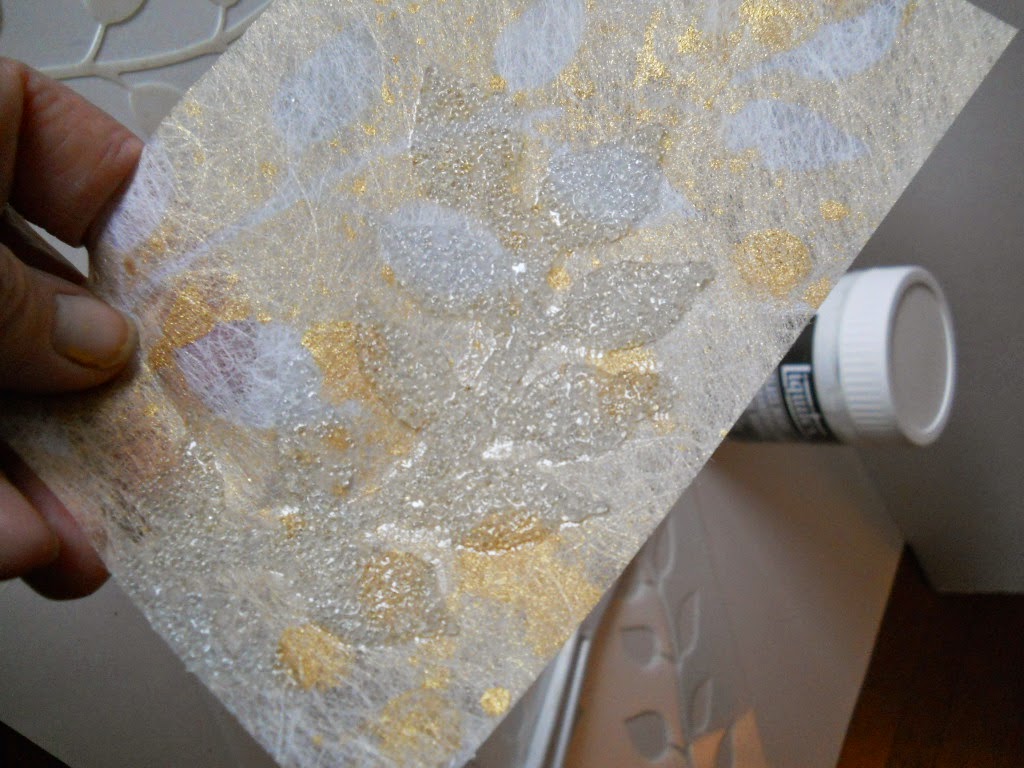 The texture gel, Glass Beads adds some weight to the finished fibre art.  I choose not to colour my beads.  I felt like I had it way too thick so I carefully laid the stencil back down and scraped some off.  It is pretty stiff stuff.  Micro beads and gel would likely produce a similar result. 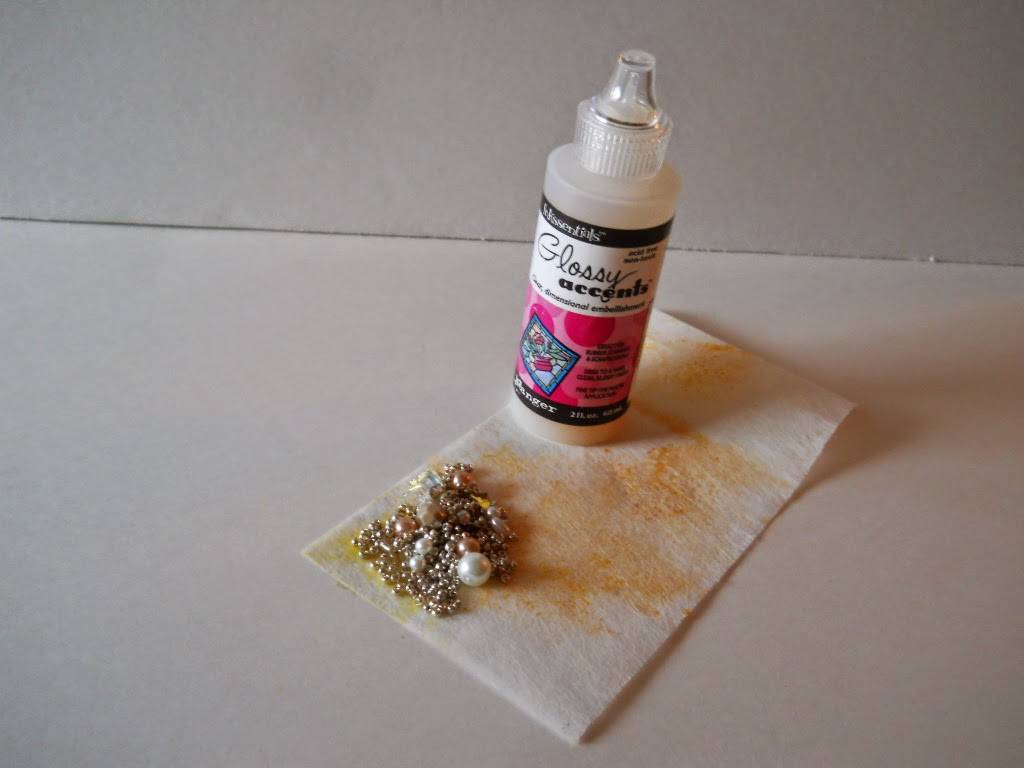 I was most impressed by Lutradur's ability to support heavy materials.  I squeezed a lot of Glossy accents down on the Lutradur and piled lots of beads on top.  No problem! 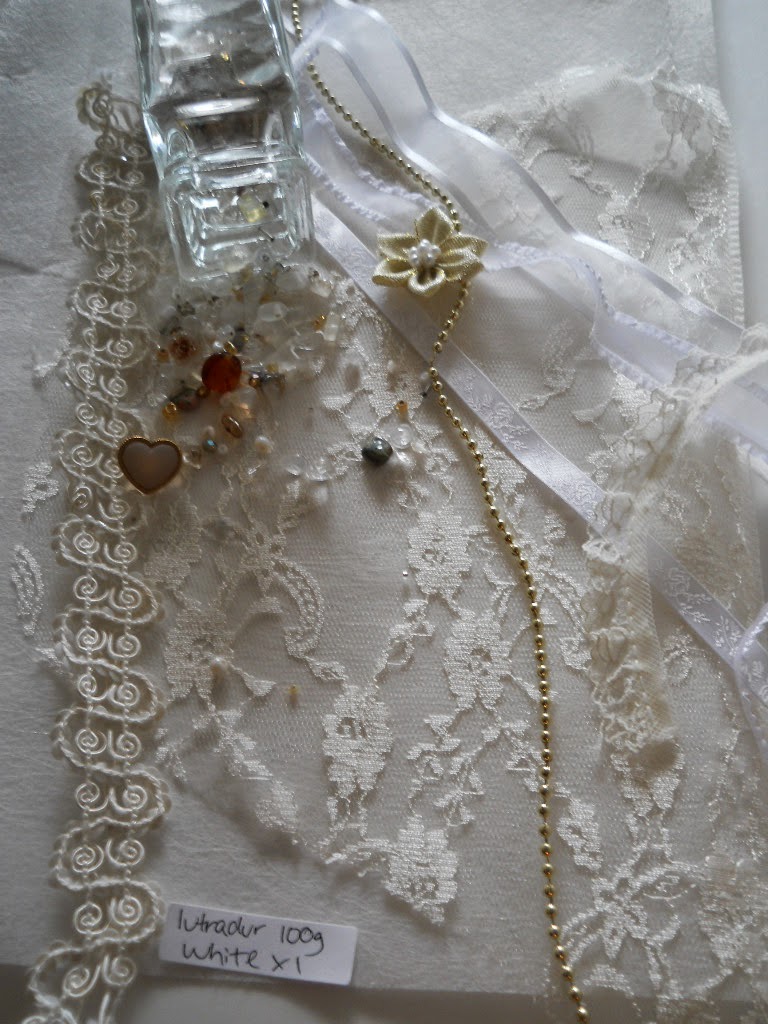 And we can add texture with fabric, threads, beads, etc.  I had a large selection to choose from as I worked on my brides page. 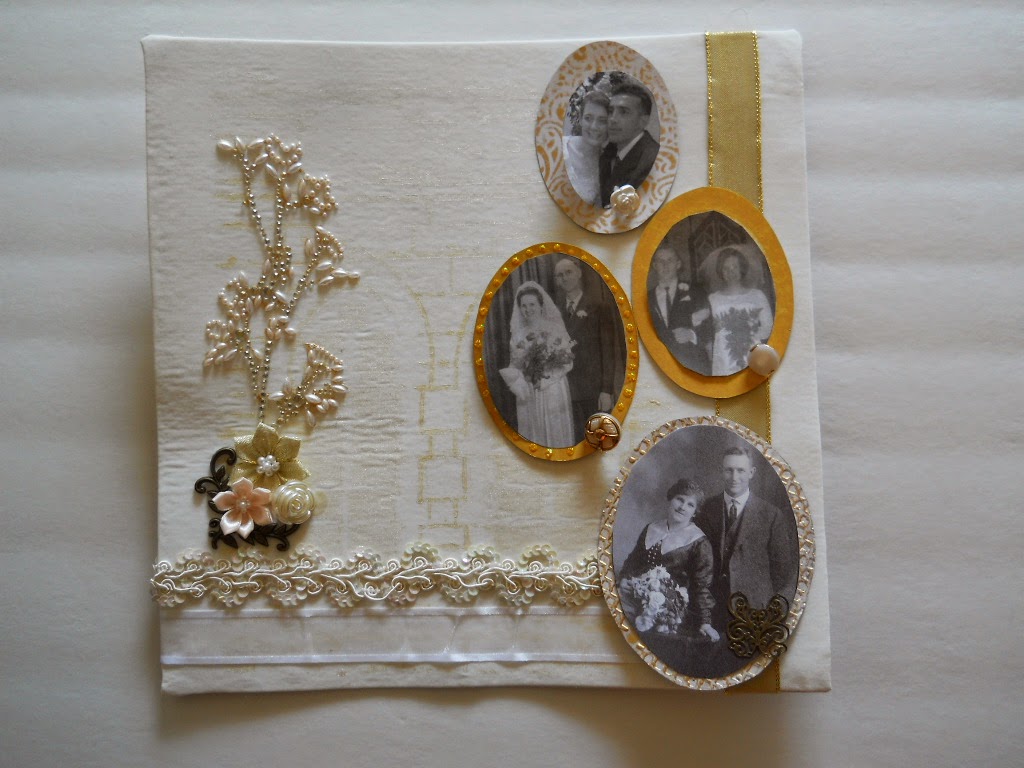 I am feeling like I have leaped from kindergarten crayons to marrying straight out of school.  I kinda did but the learning curve usually has more steps in it.  Again I have a lot to put on one page.  Four generations.   I stenciled onto a sheer fabric for my background and then ironed it onto a thick base that had an adhesive on each side.  Four photos fit if I cropped and did ovals.  That took a week alone to figure out. :^)  I was all for lace and beads but this seemed to require a more subtle effect.  The size decreases and the frames are cardboard.  I tried to make them fit each bride's sensibilities.  The photos will be cut and added later because I am printing my own.  In the process I smeared one in my hurrying.  :( I may fiddle a bit more as I couldn't find a bit of velvet ribbon to represent my own dress.   I daren't linger overlong because there are ten more pages to prepare and if I tarry too long my granddaughter may find a nice groom!  lol

This page required some mindfulness as the palette is creamy white.  The interest must come from the texture but it also required an understated elegance.  The bride may look like a princess in frothy laces but I do believe most mothers manage to get some good solid stiffening into the bride's backbone and corset which supports the softer layers and shows off all that lovely texture.

So when we lift the bubbly to toast the beautiful bride lets give a wink to the mothers, the teachers, the supporting cast that helped bring another princess into the kingdom to show off the textures that enhance our lives.