Elle has been hard at work all month. I really appreciate all the work she has put into helping me with this months postings.

This was suppose to be posted by me yesterday but I was at work, my parents for dinner, then the dance recital of my niece and great nieces. And then crashed into bed.

She has done a fabulous job. And I love her sense of humour.... Check out her blog. Elle 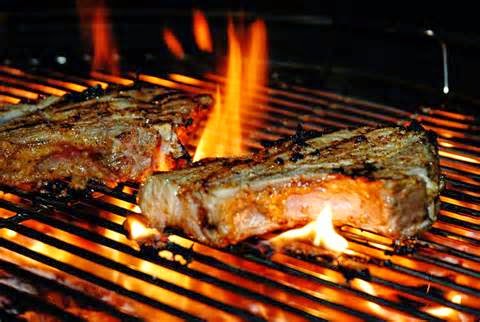 According to The Old Farmer's Almanac, it is National Barbecue Month.

Can you imagine your mother's reaction to "Mother, may I set it on fire?"!

My mother was away somewhere but had left steaks out for supper.  My brother and I were on supper detail and managed to set fire to the steaks on the stove top.  Both my parents were Girl Guide and Scout leaders so being under their influence we were prepared  (!!!) and poured  a box of baking soda over the flames and the steak. :(  My Dad was not impressed and pointed out just putting the lid on would have saved our supper! hmm! 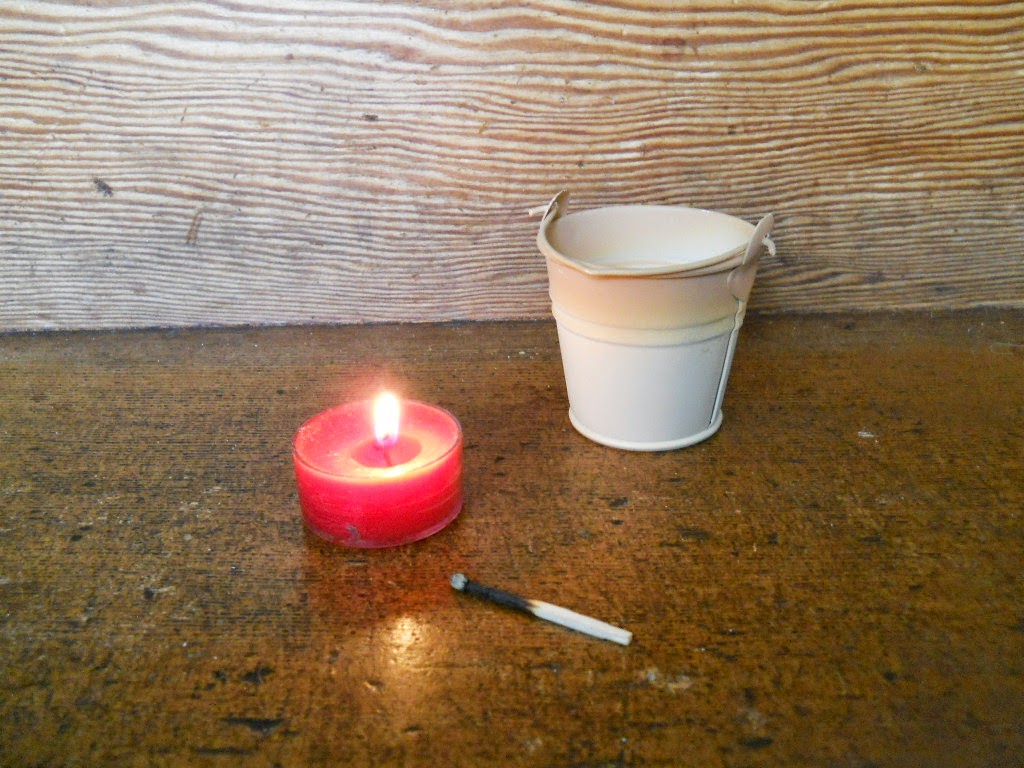 This week I have been playing with fire!  Precautions in place.

First I warmed up by using fiery colours. 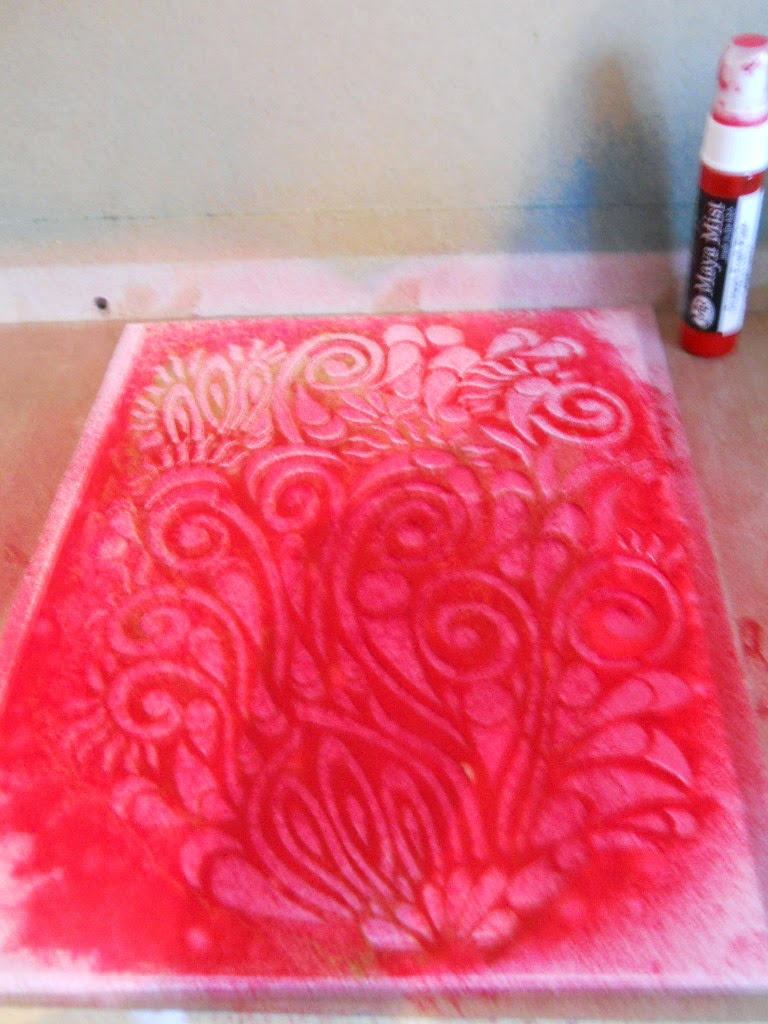 I sprayed Dragon Fruit Pink Maya Mist onto Lutradur through a stencil. 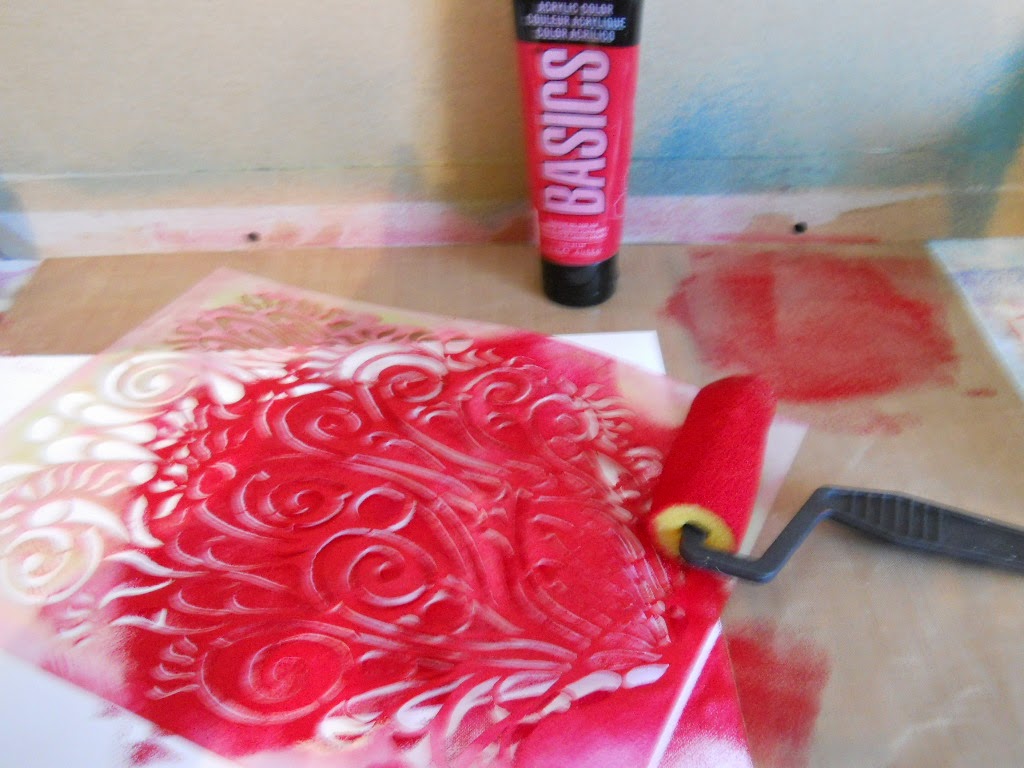 Then I used Cadmium Red Deep Hue Liquitex Acrylic Color which I rolled onto Lutradur through the same stencil with a foam brush. 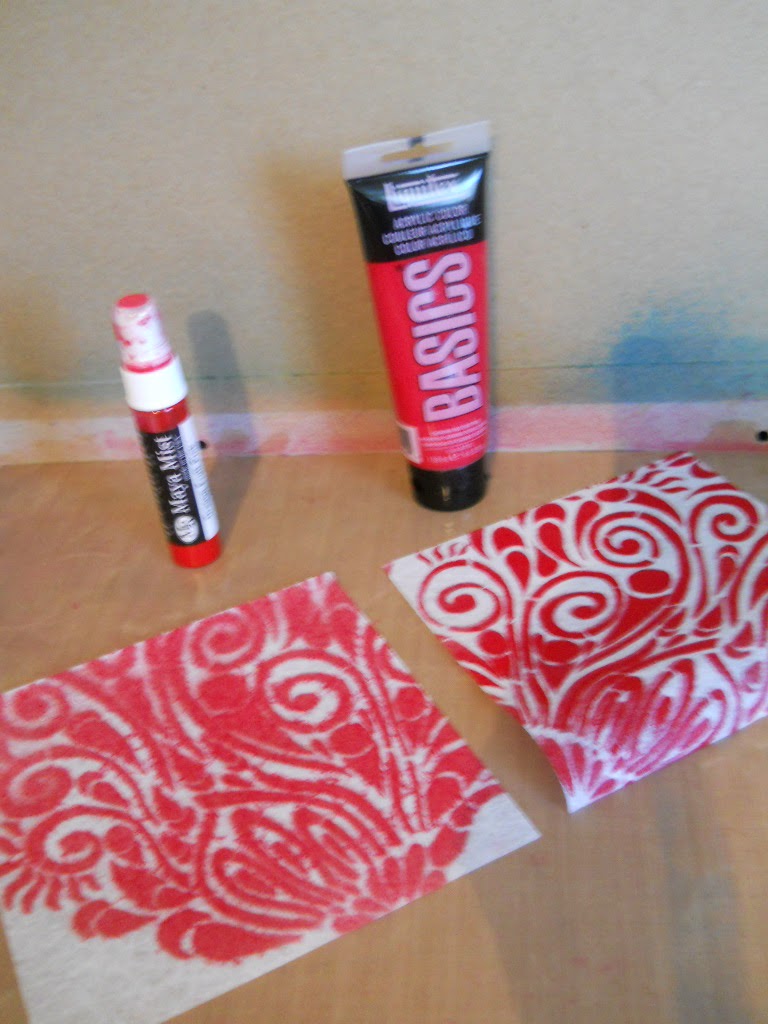 The ink spreads through the webbing and produces a softer look than the lightly rolled acrylic which produces the sharper image.  It should be noted that the paint can act as a resist.

To warm things up,  I heated up layers. 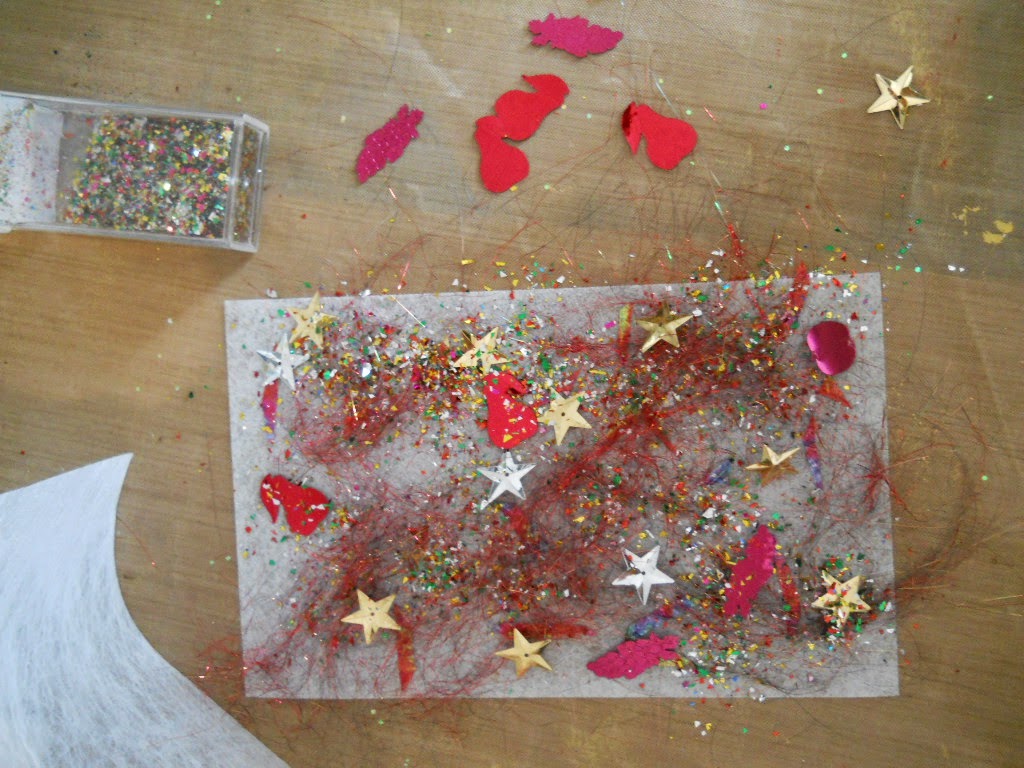 I sandwiched some bling between two pieces of  Lutradur which I sandwiched between a silicone sheet and ironed away! 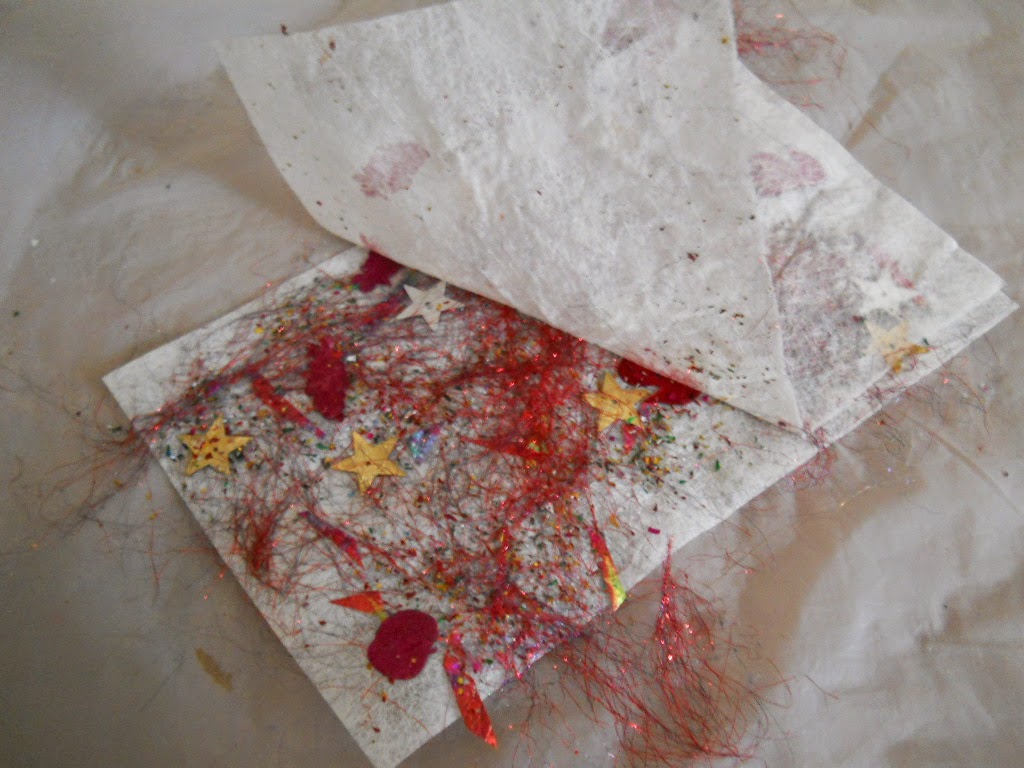 It stuck but mainly to the bottom one! 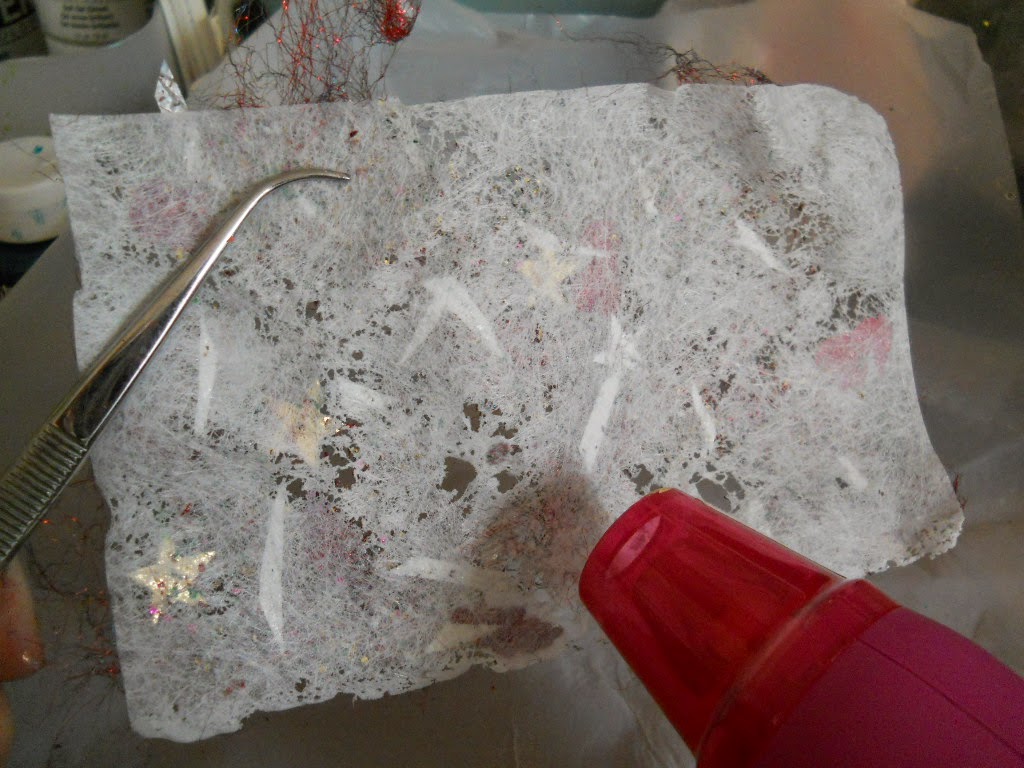 I distressed it with a heat tool and learned that I like to have the lacy effect done from the back as the added bling isn't distorted as much and the holes happen quicker. 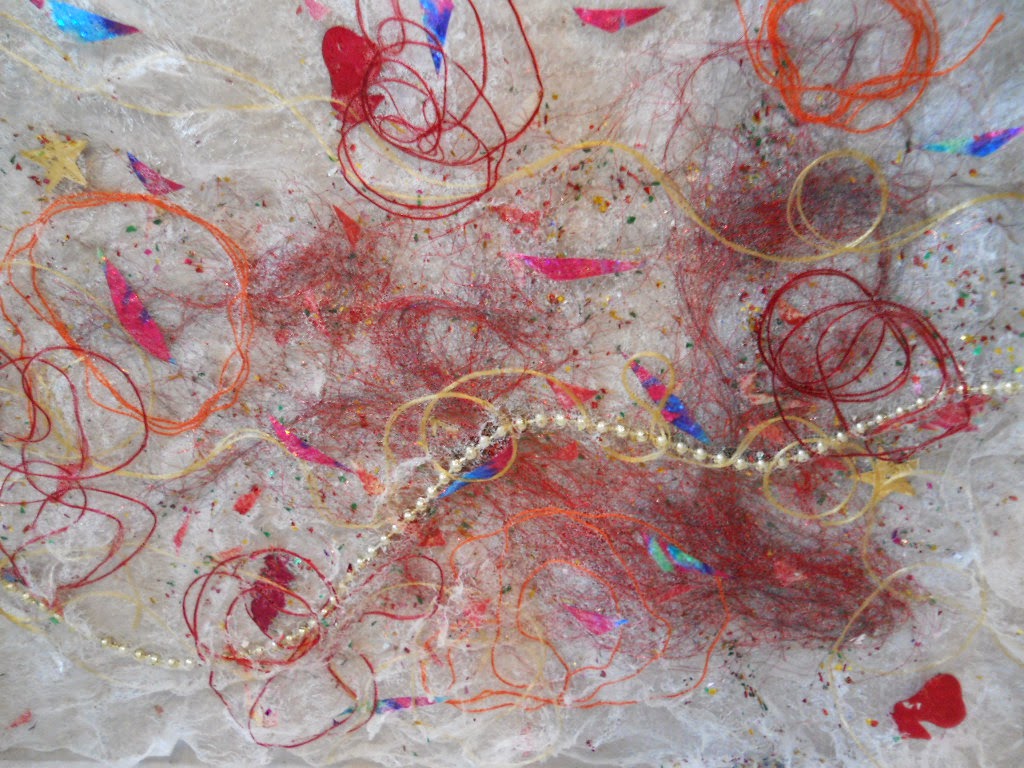 Then I spread bling, threads and bits of coloured Lutradur between two sheets of wonder under and ironed away again. 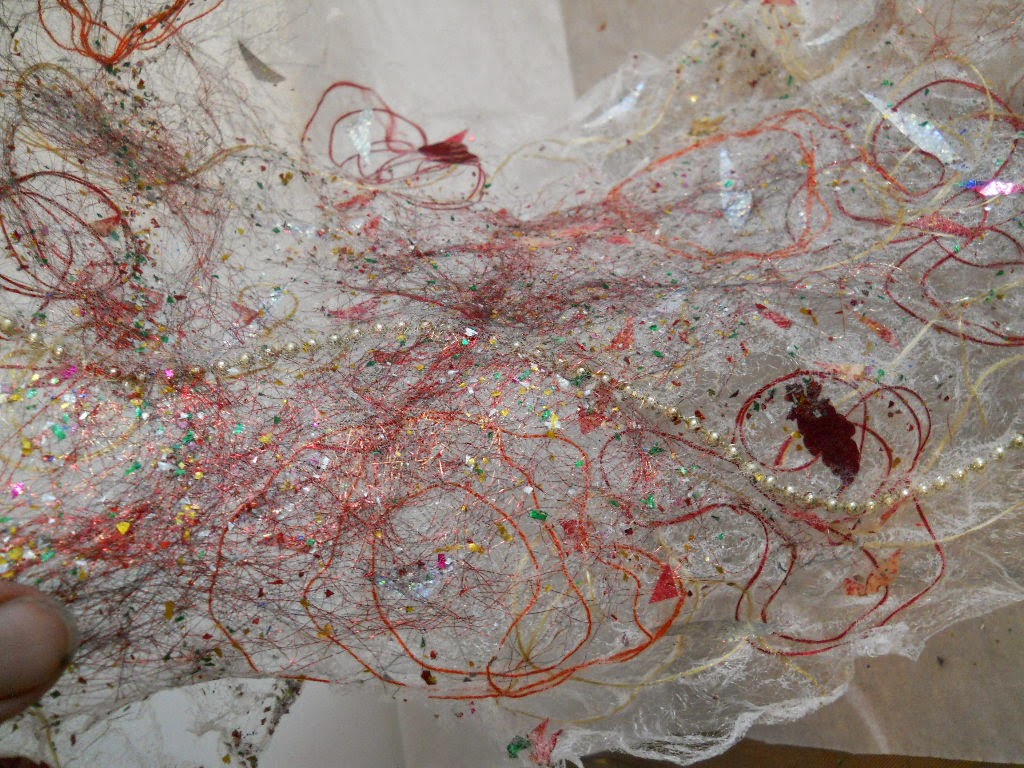 Peeling it off was interesting but it came off and I thought it was great. 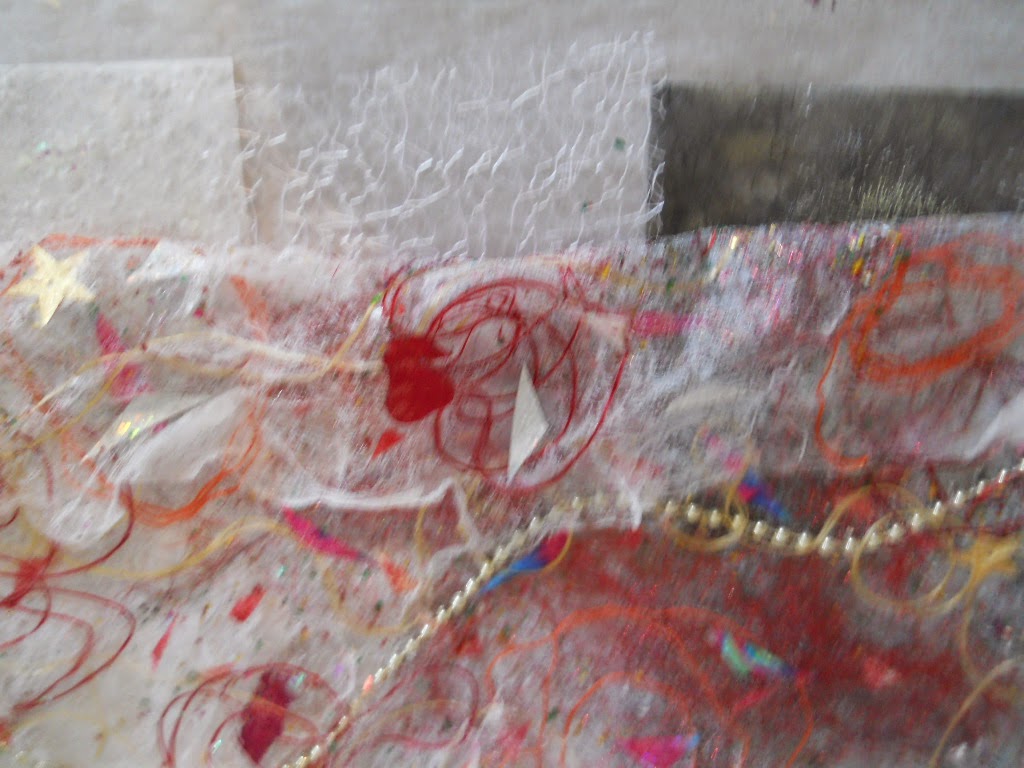 But as I was experimenting with the Lutradur,  I placed it on a piece of dark Lutradur, along side a bit of net and then some white Lutradur.  I covered the top side with some fine net.  I fused it again. 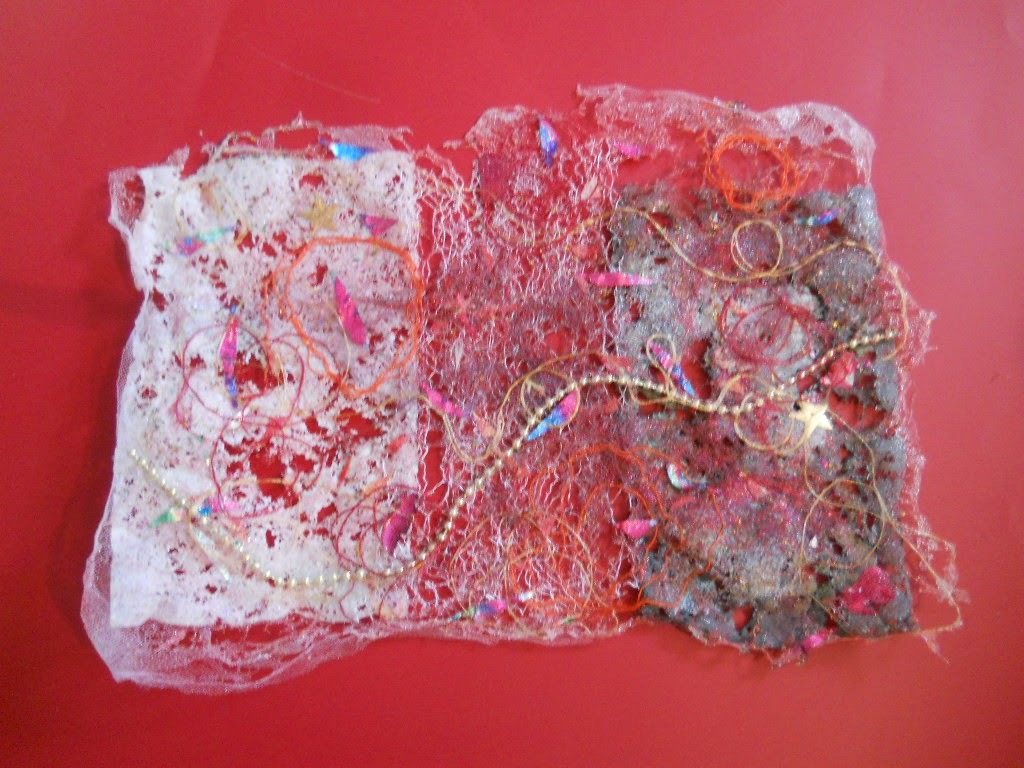 Then I distressed it with the heat tool. 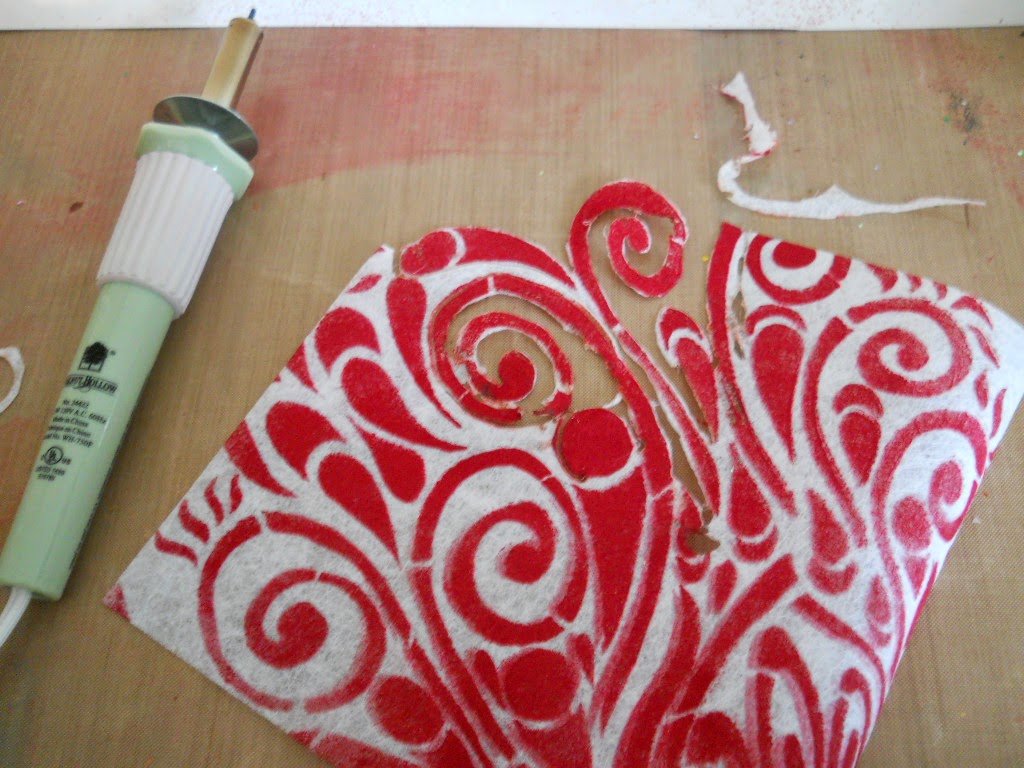 Next  I began to cut away edges from the earlier acrylic sample with the soldering tool.  Good idea but I need a better image as forgot about the properties of a stencil!. :o 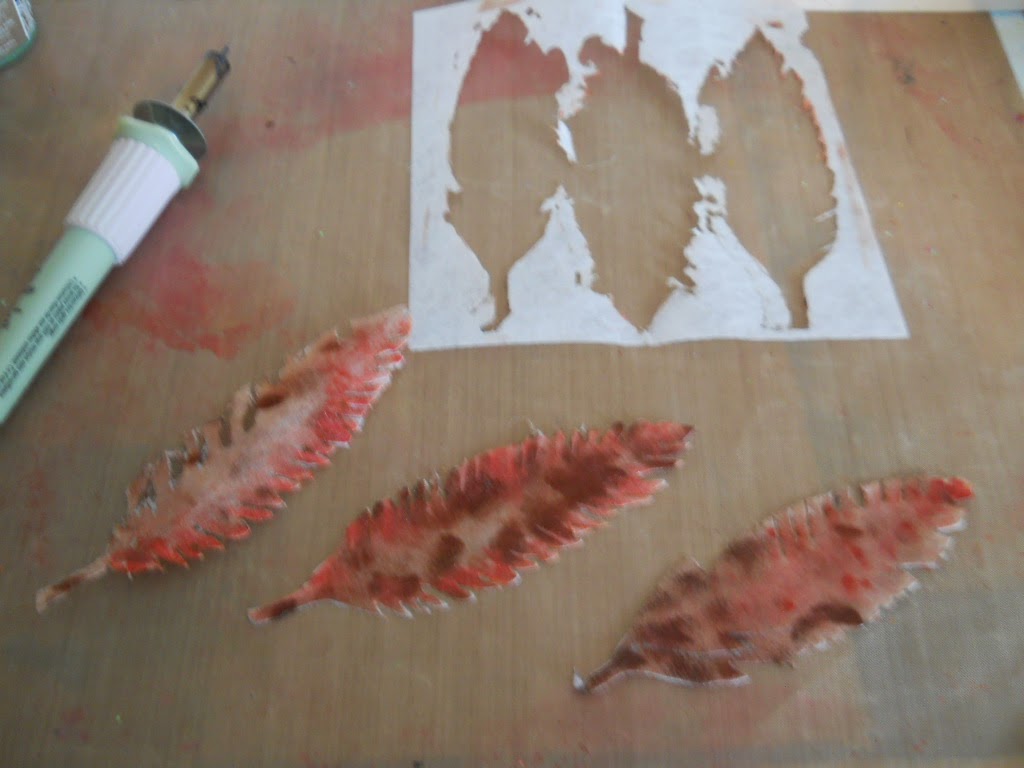 These feathers were fast and had great edges!  Feathering was quick and easy! 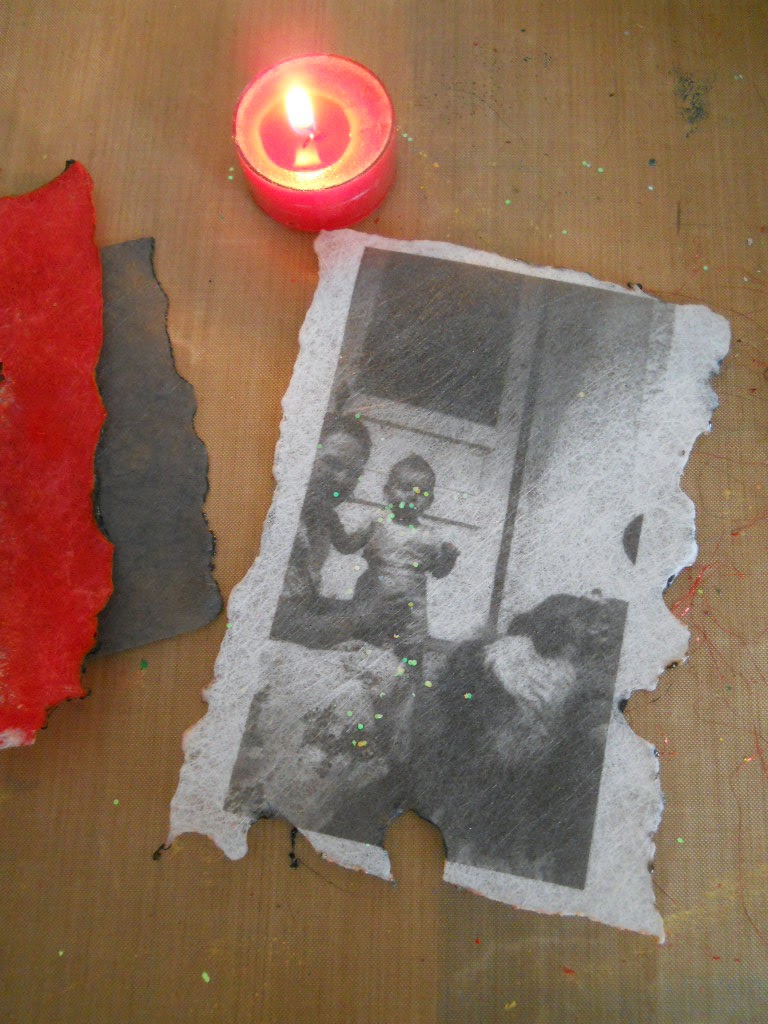 What would happen if I brushed the edges with a real flame?  A slow steady pass through the flame is great for aging or texture as Lutradur doesn't tear.  There is less melted residue of the fibres and the edge is crisp and even clean.   But don't get too complacent. 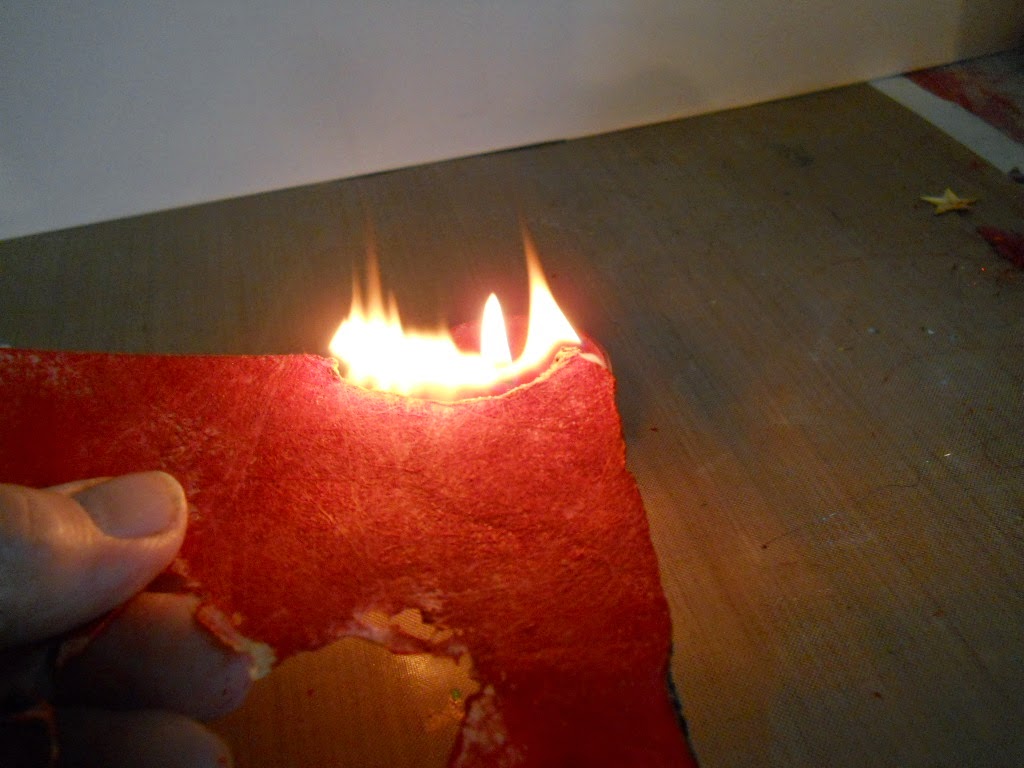 It can and does sometimes flare up.  I'm not sure why.  I didn't notice too much difference between painted and unpainted Lutradur.   I didn't feel anxious; nor did my heart beat unduly.  I would do it again for an old, yellow, aged effect. 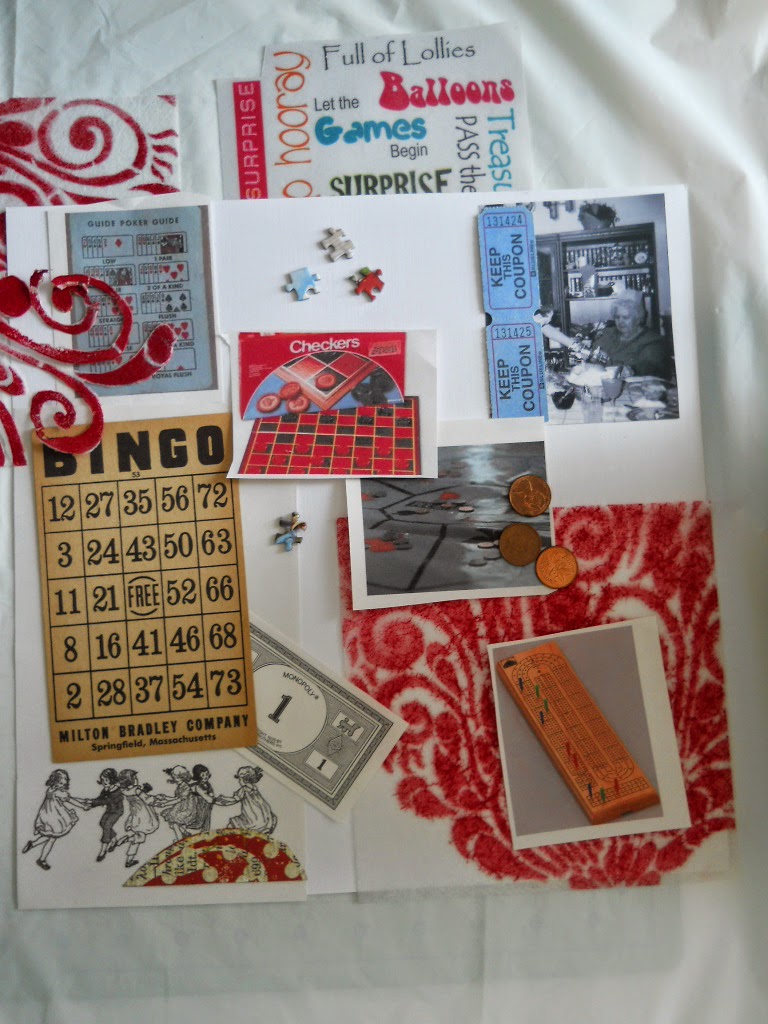 Things are heating up finally here on the farm.  The trees are more than just a hazy green and the dandelions are in full bloom.  I must confess my attention is wandering from setting creative fires to planting breath taking blossoms.   I have mislaid key photos and my photos from my photo paper is scratching in a worrisome way.  I did play a bit with my next page but it is far from being done. 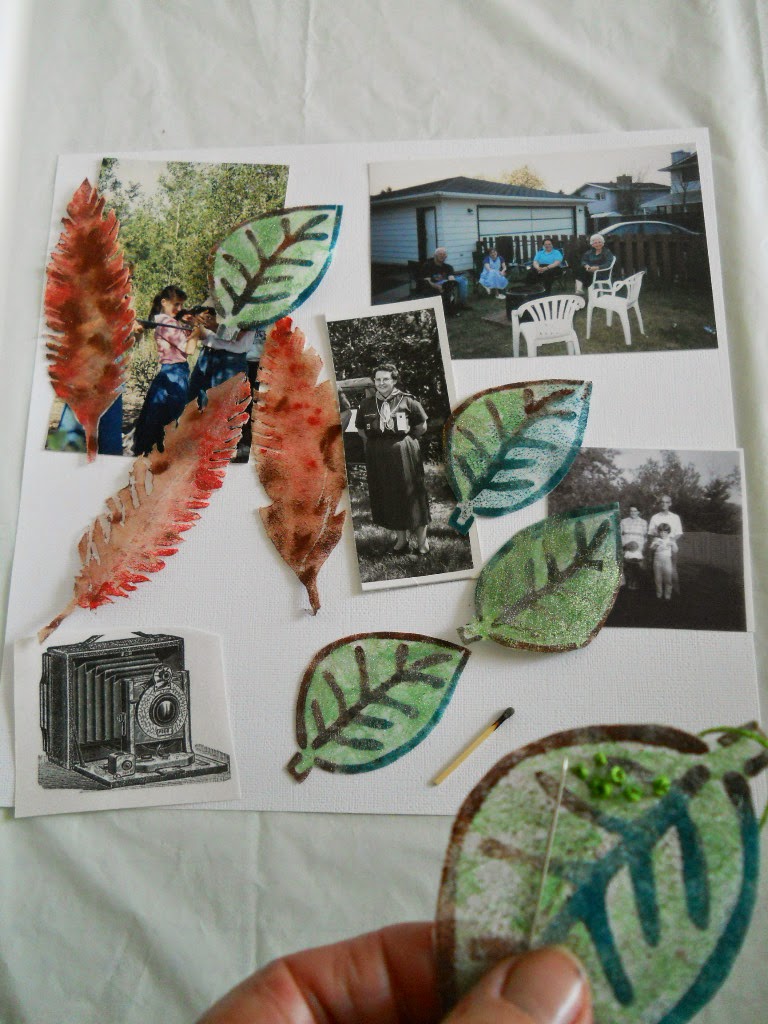 One last technique for any worried about fire hazards.  I doubt pulling a needle through Lutradur will create enough friction to cause a fire.  I want to do a camping page if I can find the missing images. Of course I could fill in the blanks with feathers and foliage.   Adding a few bits of texture to leaves that I cut out with scissors makes my heart really beat faster!  Now this is a technique I am looking forward to sitting and playing with while my Rooster barbecues the steaks!  Gee, I hope he doesn't set them on fire!!!

Thanks once again Elle for playing along.

Email ThisBlogThis!Share to TwitterShare to FacebookShare to Pinterest
Labels: Elle, Let's set it on fire, lutradur