More Results with The Undye

Hi...Marsha from coolquilting here again with a quick extra post!! As soon as I saw Nienke's post on this blog about the "Undye"  here, I knew I wanted to try it. I won't go into details of the process since Nienke covered them in all her posts on the Undye technique. But I will include the steps since they show how the dyes and patterns come and go....along with discouragement and encouragement!!

I started with 2 pieces of cotton about 8 inches by 10 inches and painted on the Procion dyes: 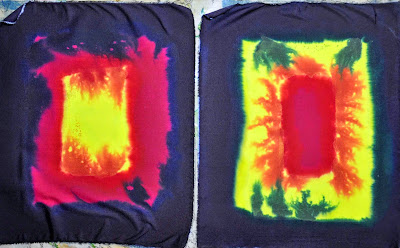 The dyes mixed and formed interesting patterns at this stage! I let them dry overnight. 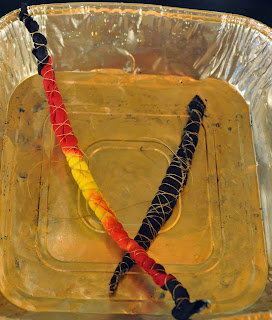 I immersed the "worms" in boiling water for about 15 seconds in an old not-for-food pot and got quite dismayed when the water turned completely black: 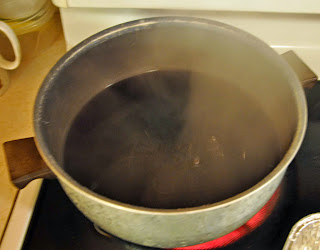 But I didn't give up since I could see that the pieces were still dyed...I let them dry for 3 days in the warmest room in the house(in the basement with the furnace). These are what they looked like after drying:

After cutting the threads and unrolling I was quite discouraged. The yellow-centered piece looked almost pure black with just a few hints of red colour and the other one looked all black. Luckily I took photographs at this stage: the photographs showed some interesting patterns and colours other than black, so I was now mildly encouraged! The wrinkly pieces are shown below: 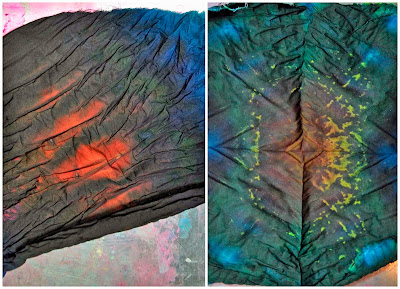 I mixed together my soda ash solution and cheap hair gel(adding just enough gel so I thought the soda ash was thick enough that it wouldn't run) and brushed the mixture on. I let them fix under plastic wrap for about 4 hours. I used an old cookie sheet for this stage so the soda ash wouldn't ruin my work table. They look SO black at this stage: 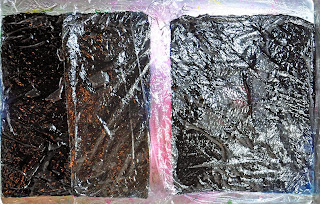 I found this step with the soda ash to be a bit hard on the lungs...so a well ventilated area would be a good idea!! And good gloves!!

After the soda ash/gel incubation I washed the pieces for what seemed like forever!! But finally the water began to run clear...and still the pieces looked quite black to me...but I hung them to dry, mildly discouraged!!

But magically as the pieces dried, the patterns and colours emerged. I ironed them flat and was quite delighted with the results. 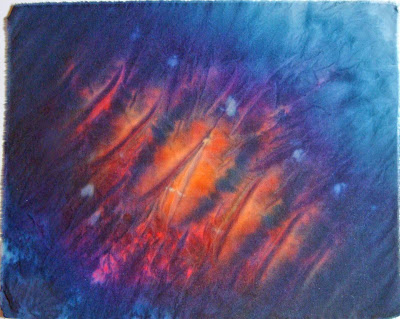 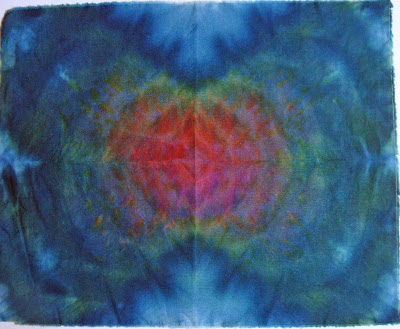