The first step in making snow-dyed shibori is thinking about the colors of dye you want to use. In this case, less is more.

During the process of snow-dyeing, because of the slowness of the dye migration into the fabric and the subsequent bonding with the fabric (because of the cold temperatures), it’s possible to get a large number of secondary colors from just a few dyes.  This is particularly true when using dye concentrates made from mixed colors or by combining dye concentrates of several primary colors with each other and with another neutral color. As the snow melts during the snow-dyeing process, the different dye components form additional colors which bond to the fabric at different rates.

The photo below is part of a quilt I made with snow-dyed fabric. A number of secondary colors formed from the combination of dyes used in the piece. 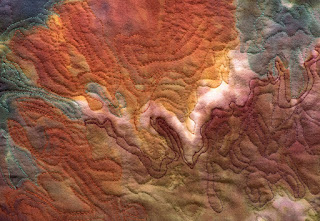 You can get mixed colors in a variety of ways. Some people buy a lot of dyes that are already mixed by the dye houses from which they purchase the dyes. Other people, who—like me—are more economy minded, mix their own colors ahead of time using primaries. Still others work only with primaries, allowing the mixing to happen during the dying process itself.

Depending on your color preferences, the decision about colors can be spontaneous or it can be thought out ahead of time. I like to work somewhat monochromatically, so I tend to use a relatively small number of colors in my snow dyeing work. I often use black or brown or grey, or maybe two of these more neutral colors, in combination with one other color. Sometimes I will use two shades of one color, perhaps a golden yellow and a lemon yellow, together with black. Despite using such a limited color palette, you will often get a surprisingly large number of additional colors in the final piece.

Once you’ve made a decision about the colors you want to use, you should mix up several bottles of 5% dye concentrate. I usually work with squeeze bottles and make about 8 ounces, or 250ml, of each color I want to use. If I plan to work with several snow-dyeing containers, each of which will be in a different color family, then I will make enough bottles of dye to see me through the entire dyeing session. 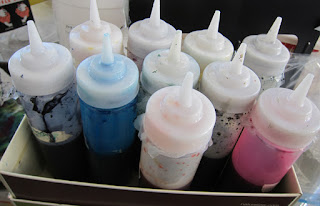 Since snow dyeing is done in the winter, the dye concentrates will last longer, even without refrigeration, than they would in the summer, especially if they are kept in a cold place. And, at the end of the snow dyeing session, the remaining dyes can be used to dye threads or paper.
Posted by Diane Franklin at 1:00 AM