As noted in some earlier posts, I wanted to experiment with rust-dyed shibori using different liquids: sea water, black tea and a 50/50 mixture of vinegar and water.


Here are some pictures of the fabric that was wrapped around rusty pipes and steamed for an hour and a half. Each of the pieces is very different from the others. In this instance, the fabric wet with vinegar and water became the most rusty. The fabric wet with tea also became somewhat rusty. That fabric also has some spots that were caused by the interaction of the tannin in the tea and the iron on the pipes. The fabric wet with salt water was the least rusted. Note that the patterning on each piece is different from the patterning on the other pieces even though they were all wrapped and steamed in the same way. 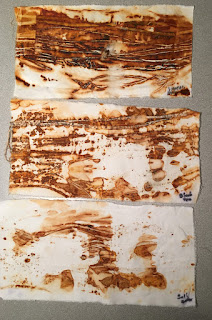 In my second experiment, in which I kept the moistened bundles in a warm oven, I also got the greatest rusting effect from the vinegar and water combination. The rusting effect was also stronger with the batching method than with the steaming method. The next best effect was from the sea water. The fabric moistened with tea had the least amount of rust, and it also had some black spots from the tea. This picture shows each of the results. The vinegar/water piece is on the left, the sea water piece is in the middle, and the tea piece is on the right. 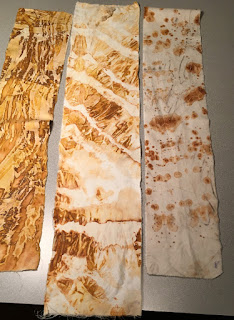 What surprised me most from this experiment was the different kinds of patterning I got on each piece. All the pieces were wrapped in the same way: the fabric was wound around the pipe and tied with string. I tried to compress each fabric piece but was not able to do so because of the friction on the pipe. Despite this, I got some very distinctive and interesting marks.

In conclusion to my series of posts this month, I would say that it’s possible to use unusual methods to get shibori effects on fabric. The outcome of each method is different from what you’d get using traditional shibori methods with Procion or acid dyes, but interesting all the same.

Finally, if you haven't already done so, please check out my book, Dyeing Alchemy. It contains a great deal of information on Procion dyeing and also includes a workbook that does all the dyeing math for you. And, please read the latest review of the book in Shuttle Spindle and Dyepot. The link to that review can be found on my website, on the Dyeing Alchemy page.

Thanks for reading my posts this month! I hope they were useful.

Posted by Diane Franklin at 1:00 AM