An Aside: Rust Dyeing and Botanical Printing

I recently become interested in botanical dyeing, and this summer I took two workshops focusing on the process. One of these workshops used plastic pipes or wooden dowels for rolling the plant-laden fabric, but the other workshop used rusty iron pipes. This led to some interesting discoveries as well as some great fabric.


In the second workshop, the fabric was steamed on the rusty pipes for several hours, depending on the fabric type. As the fabric steamed, it received a bath of vinegar every half hour. The steaming process transferred the images of the plant material onto the fabric, and it also transferred rust.

Working with those pipes gave me the idea of using them for my experiments with rust-dyed shibori.


One of the most interesting rusting effects I got during the summer was accidental. I was steaming some delicate silk, and I did not want the silk fabric to get too dark during the steaming process by being in direct contact with the rusty pipes for a long time. To prevent this, I cut a piece of linen fabric the length of the pipe and rolled it around the pipe, tucking the ends into the openings at the ends of the pipe before placing the plant-covered silk onto the pipe. The plant material on the silk also transferred to the linen. In addition, the ends of the linen that was tucked into the pipe end openings created a lovely rust pattern. 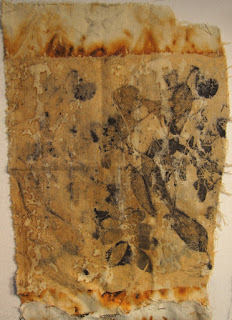 Next year, once the plants are back and the weather is warm, I plan to experiment more with this process since I think the combination of rust and plant images create very nice fabric.
Posted by Diane Franklin at 1:00 AM