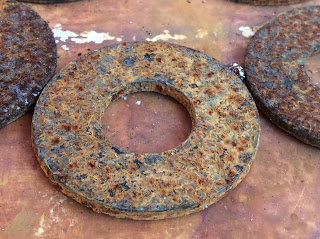 Before we get into the actual rust dyeing process, I want to get technical for a bit. I believe that if you understand the science behind a process, it will help you to achieve better results.

What exactly is rust?

According to Wikipedia, " rust is an iron oxide, usually red oxide formed by the reaction of iron and oxygen in the presence of water or air moisture. Given sufficient time, oxygen, and water, any iron mass will eventually convert entirely to rust and disintegrate."  Rusting is the common term for corrosion of iron and its alloys, such as steel. Many other metals undergo equivalent corrosion, but the resulting oxides are not commonly called rust.

The main catalyst for the rusting process is water. Over time, the oxygen combines with the metal at an atomic level, forming a new compound called an oxide and weakening the bonds of the metal itself. If salt is present, for example in seawater or salt spray, the iron tends to rust more quickly. Only iron or alloys that contain iron can rust.

By placing fabric in contact with the metal and the addition of moisture, maybe some salt, the iron oxide permanently stains the fabric. If left too long, the rust can eventually damage the fabric, especially if it is thin or delicate . This process usually develops more quickly in warmer environments. I just returned from a 2 month stay at my daughter's near Washington DC, and I managed to do some rust dyeing. While it was warm, her place didn't received full sun for 4-6 hours like mine does, and I could see some big differences in the results.


Rust dyeing does damage the integrity of fabrics slightly; so if you are looking for an archival process, this is not it. Items with very strong or dark rust-dye will be more difficult to sew as the rust dulls the needle quite quickly.


The bottom line? Rust happens. Even if you do nothing to facilitate it. Throw some fabric out in the elements with steel, and it will happen.

OK, enough of the technical stuff. I hope your eyes didn't glaze over too bad. Come back Tuesday and we will start getting down to specifics.