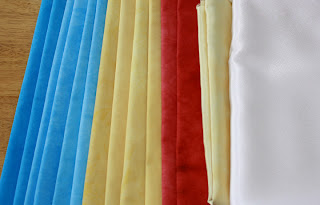 WOW - A NEW TECHNIQUE
It is Saturday and I was just minding my own business washing out some of my newly dyed fabrics.Threw in two color catchers into washer. Took out the color catchers and threw the fabric in the dryer. Ironed the fabric and the color catchers. That is where all normality stopped. I am working on a design that requires rocks on the bottom of a stream. I really didn't know what I was going to use. WELL, I took one look at the color catchers (that came out a nice charcoal grey) and thought "that kinda looks like rocks, kinda".
That was when the Dyeing powers that be took my mind and body over. I started to think, "color catchers, dyes, color catchers, dyes". So then I dyed two color catchers with Havana Brown. Then I dyed two color catchers with my husbands coffee. I then poured some of the Havana Brown into the coffee.
All this looked very nice but now quite what I wanted. SOOO, I began to wonder what would happen if I put the catchers in a soda ash solution and then sprinkled with straight dye powder. The first thing that happened was the two charcoal grey catchers turned kind of a moss green when put in the soda ash solution. (??? who knew). But I was in a trance and had to keep going. So I put all my catchers on a plastic tablecloth and proceeded to sprinkle dye powder in little areas. (Oh course, all rigged up with mask and gloves.)
The powers that be were not quite done with me yet. The Havana Brown catchers were almost black and that would not do. Again I began to think, "black, dark.......bleach!!!!" I got out a spray bottle and proceeded to put bleach in and spritzed the dark catchers. Hmm..... wonder what the spray would do to the others. I could not stop my hand as they lightly spritzed the other ones.
Well, here is what happened. (Snicker!!) 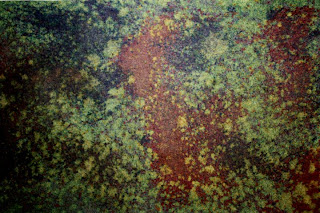 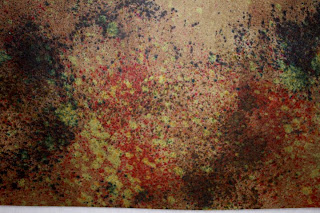 Last but not least is the clean up color catcher. I plan on using this for rocks that have mottled light on them.

I know it is not my turn for a technique, but, I was so excited I wanted to share it with everyone.
I guess I am sort of back normal (as normal as I get) and my stomach tells me it is almost 1:30pm and I have not had my lunch. Thank all of you for letting me share. After all is was not my fault ;o)
Posted by ROSALITA at 12:26 PM

Email ThisBlogThis!Share to TwitterShare to FacebookShare to Pinterest
Labels: I Created A New Technique