Diane here with another post on the Arrowmont workshop on indigo and weaving.  I should begin by saying that a lot of the following may sound foreign to non-weavers but play along, smile and nod knowingly.  Much of what happens on the 'net is pretty foreign to me, too.

After we had measured and wrapped the resist tape tightly on the weft, the wool was wetted out and dipped into one of the two indigo pots we had mixed up a couple of days before following the instructions from Sara Goodman, the indigo teacher for this workshop.  The weft bundles are the ones with the white areas hanging on the drying rack.  They have been washed with mild soap and rinsed thoroughly. 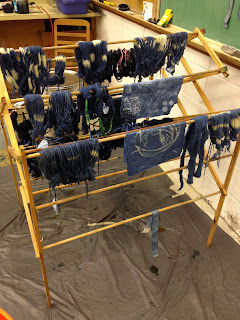 Now it was time to begin weaving and Mary Zigafoose, tapestry artist, who was the other half of the teaching team for this workshop, took over again.  She is second from the right in the photo below. 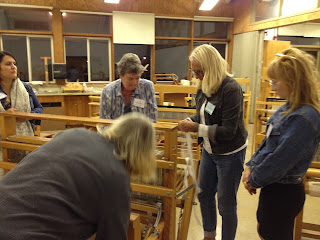 This is my weft arranged nicely after taking of the green ikat tape.  On this my first time using the tape, I had not wrapped tightly enough and the edge between the blue and white are not sharp and clear.  I improved on my technique when I tied the next project which was warp with cotton yarn. I took it home from the workshop to put on one of my looms - more on that in the next post. 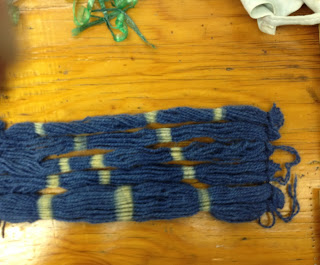 Here is the weft turned the other way and sitting on the loom I was going to use at the workshop.  This was the point at which I wound the weft on a shuttle beginning with the end that is closest to the bottom of the photo and ending with the last bit that is at the top of the photo.  That way when I begin to weave the design will end up oriented in the direction I intended - not that it's a realistic image... :) but it's sort of a house shape. 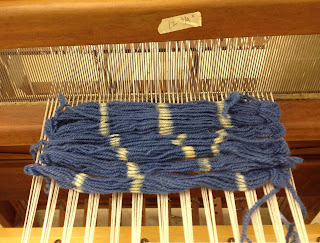 The first shots of weft show that the spots of white are beginning to line up.  It was decided with a consultation with Mary that I really should have had a loom with two more warps to accommodate the weft width - no time for that adjustment - so she suggested that I use the temple (that red thing)  to force the width of the design to allow the spots to match up. 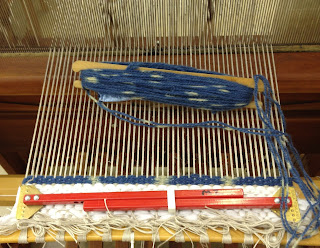 Here is the finished piece below.  As you can see the middle is stretched out but the top and bottom are trying to shrink back to the actual warp width.  I'm okay with it as a sample!  I did a firm warp finish with the linen warps on the top and bottom.

Weavings by others in the workshop.  This one shows that she too had ikat tape tying problems, the yellowness at the edges of the white.  Then the second weft she measured was obviously dipped into the pot after it had been improved with more indigo and she tied her tape only one side of the measuring groups.  I took a photo so I could remember this as I really like the way this turned out!  Mistakes can be beautiful. 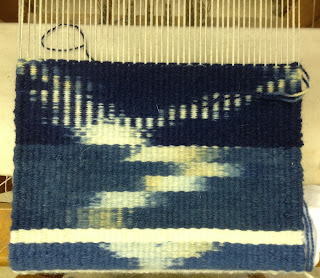 Here's another sample with the edge finish in progress along the top edge.  The bottom edge is completed.  I placed the sample on the red paper to give enough contrast to see the linen warps. 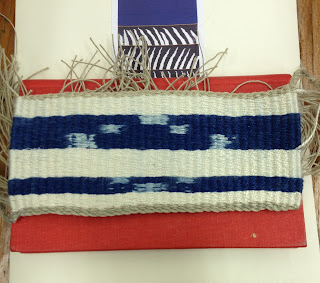 Next up, I warp a small loom with the ikat dyed cotton yarn and got so excited I almost forget to take enough photos.