Sometimes projects just don't turn out as planned.  Over dyeing was on my agenda when I planned out this month of indigo.  My daughter had made a success of it with a woven cotton shirt that had stains on it.  I have no before shots of the shirt with stains but I promise you I cannot find any sign of them after the dip into indigo. 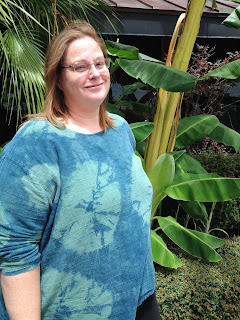 I on the other hand still have a "not for public consumption" t-shirt after a dip in the indigo.    The stains were intensified in the indigo vat.  Nothing ventured, nothing gained. 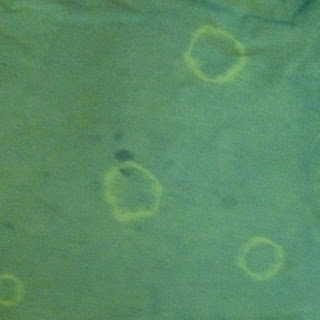 Not giving up on changing things with a dip in the indigo.  I shibori stitched this scarf - which was in two different MX dye baths and still hadn't made the grade - and pulled it up very tightly.  Put it in the pot and forgot about it. 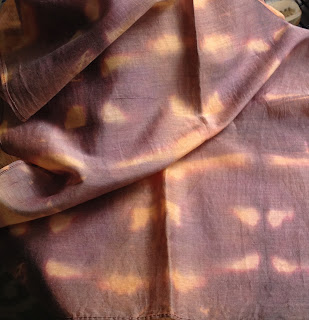 Midnight after the workshop, I emailed the teacher that there was a stray item left in the vat and I'd pick it up later.  Connie was kind enough to fish it out, oxidize it and dip it a second time, rinse it and leave it to dry in the Guild House office.  I took one peak ... and ... 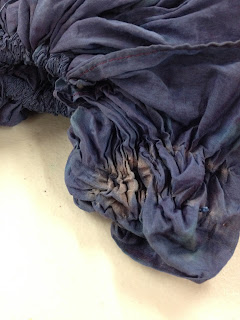 I was too excited to wait and unpicked all the shibori stitching immediately ! 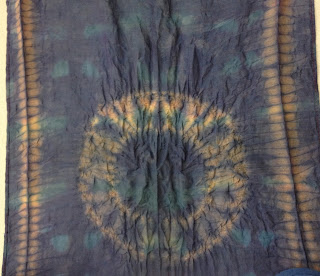 Wow.  Pleased with this changling.  It's quite a reincarnation.  There is some controversy over whether I should iron it or not.  I lean toward ironing but I'm asking opinions.