Deadlines are what keeps me going!  I committed earlier in this series of posts on indigo dyeing to finish the project I began in October last year at the Indigo and Weaving Workshop in conjunction with the SDA Conference at Arrowmont.  Putting something in writing is a promise to yourself and publishing adds even more pressure. So thank you for making me a better person, to paraphrase Jack Nickolson in "As Good As It Gets." 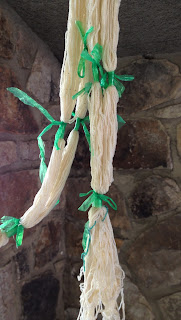 This is the cotton yarn after it was wetted out.  I had measured it out on a warping board - forgot to take a photo of that step.  While it is stretched in place on the warping board is the time to wrap it with the ikat tape which will maintain white areas against an indigo background.  You can wrap the whole warp or you can split it and wrap parts of it.  I experimented with no real pattern in mind.  I was standing next to Shelly who was also measuring a warp and we were enjoying a lively conversation - no time for concentration or measuring carefully.  Workshops are a great way to get to know people you might never have bumped into ordinarily.  Below is my dyed warp drip drying in front of someone's dyed cloth. 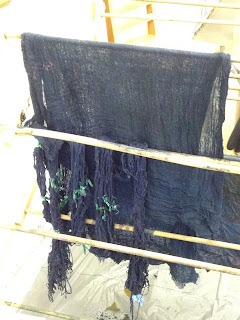 After rinsing and drying, this is warp tied with the green ikat tape and the skein of dyed cotton for the weft. 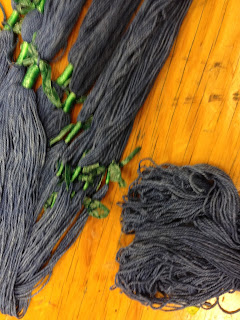 The opportunity to warp the looms at the workshop was there, but we were running out of time and most of us were weavers with looms at home. 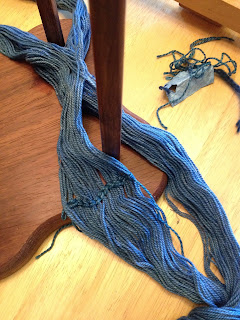 This is the warp on a couple of pegs to hold the cross I made when measuring - this ensures that I will use the warps in order as I had "planned the design."  See that little chain on the warp?  That is the counting thread I put in as I measured.  It slips out easily when you're ready to thread the loom.  Each chain represents 10 warps and so I knew I had 140 ends.  The heddle I was going to use only accommodates 96 warp ends (8 inches x 12 ends per inch).  If you're lost here, just think about those numbers on the package of bed sheets.  Thread counts on woven goods indicate the quality of the goods in most cases.  A sheet with a 120 thread count is much coarser than one with 600 thread count, so a 120 thread count would be about ten times as dense as my little scarf. But that's fine for a drape-y soft neck scarf. 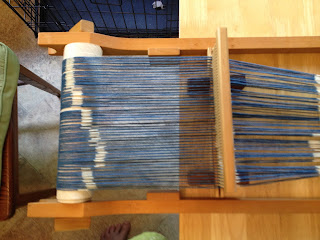 I decided to use the remainder of the warp as weft and it's coming along great, IMO!  :)  I did a line of hemstitching at the beginning and the excess which is tied to the loom (and looks like a jumbled mess at the bottom of the photo) will become the tasseled fringes.  Crossing my fingers I have enough weft dyed to weave enough to hang around someones neck. 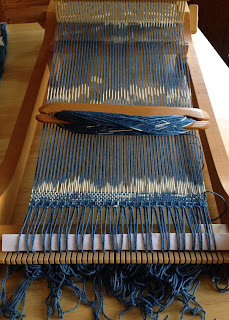 Here is the weaving a little farther along and you can see I split the warp when I was wrapped it with ikat tape.  I'm weaving this part with some of the leftover warp.  The horizontal white bits in the woven part are caused by the color of the weft. 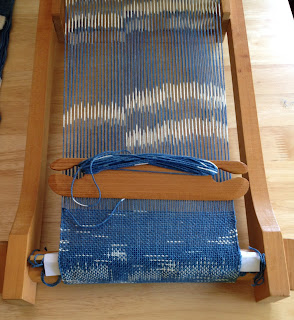 At this point in the weaving, I'm about one-third of the way through the scarf and I've switched to the solid dyed weft yarn.  I will finish up the scarf at the other end with more the leftover warp with the white spots so that it looks balanced. 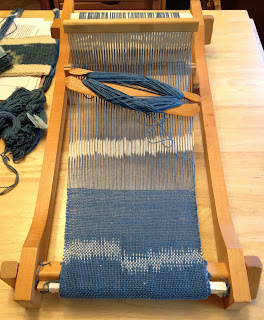 There are very tiny specs of white in this part because I tied the skein to keep it neat and didn't work hard while it was in the dyepot to be sure the indigo attached in that area.  It's kind of a nice accidental effect and breaks up the big expanse of just blue.  It's easy to learn to like what you can't fix.  Back to weaving since I want to be able to show you this scarf finished. 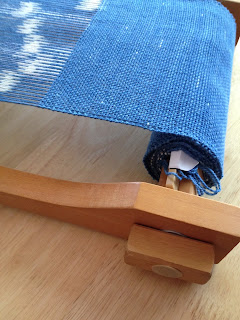 The cloth rolled up on the beam is getting pretty thick.  Close to the end of the warp. 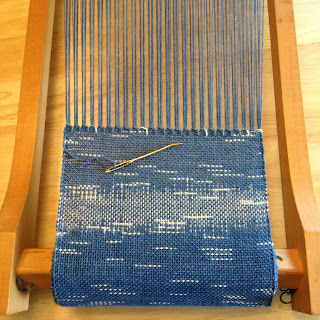 There was two inches of weft left after hemstitching the final end.  Then I tasseled the fringes and after this final photo was taken, I dunked it into cool soapy water and swished out any remaining indigo.  It's drying now and will need a bit of a press.  So happy to be finished with this one. 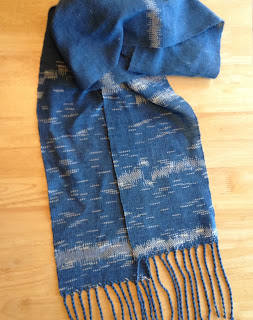