In the next few posts  I'm going to be show you some of my painted quilts and share with you some of the stages involved in their creation. Early on I got into the habit of taking photos as I went along. One of the big disadvantages of acrylic paints is that once it's on, it's on for good , you can't take it off. Photos  helped to pinpoint the point sometimes when things went horribly wrong so  that I'd know better  next time! I've learnt with practise to  paint sparingly to start with and gradually build up the layers.

So I'm starting out with my first large scale foray into painting with acrylics on quilted fabrics: 'Strindberg Shore'  This was made for Quilters Guild of the British Isles (QGBI)  'In the Spotlight' exhibition on behalf of Region 1 (London) at Festival of Quilts 2007. The theme was 'August'  - I based my piece on a book and exhibition of paintings by August Strindberg , as I said in my statement:
" He was as innovative in his painting as his writings, exploring the use of colour , texture and composition in impasto interpretations of sea and sky, merging contrasting images" 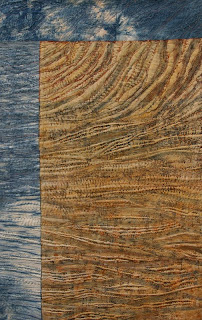 As I explained in my previous post, I make lots of  stitched samples which I then paint. This is when I discovered how quite unexpected fabrics such a  wild African prints produce a more vibrant effect than plain fabrics.  Having both machine and hand stitching gives interesting variations in texture : hand stitching gave deeper peaks and troughs while fancy machine stitching  created different density of patterns. This  sample  was one of my  more successful. 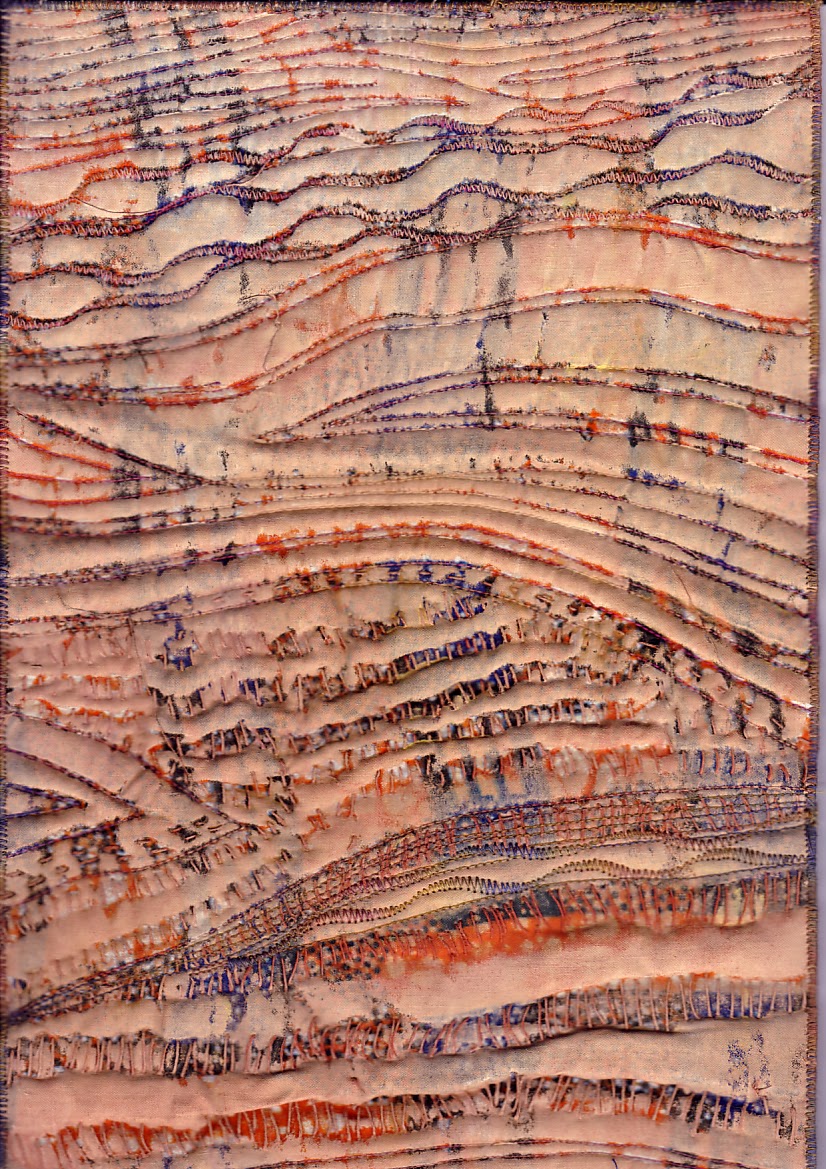 Working with African fabrics brought the challenge of how to mark for stitching (I used  more than one spool of 1/8 inch masking tape ) and then after months of stitching the sharp intake of breath knowing there was no going back once I applied the first brush stroke.... 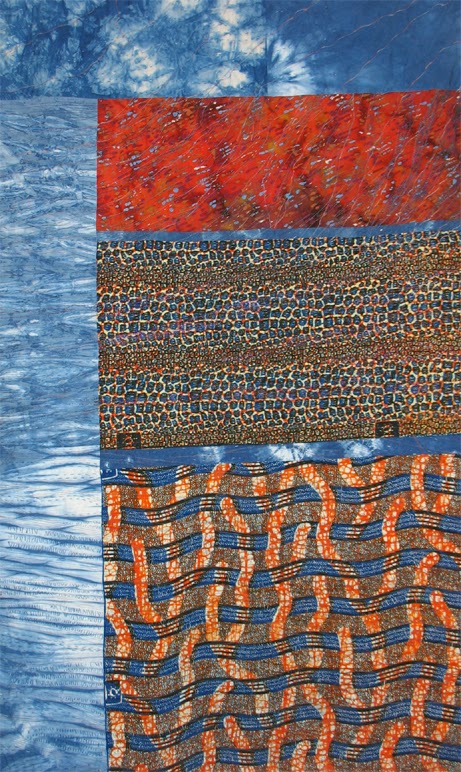 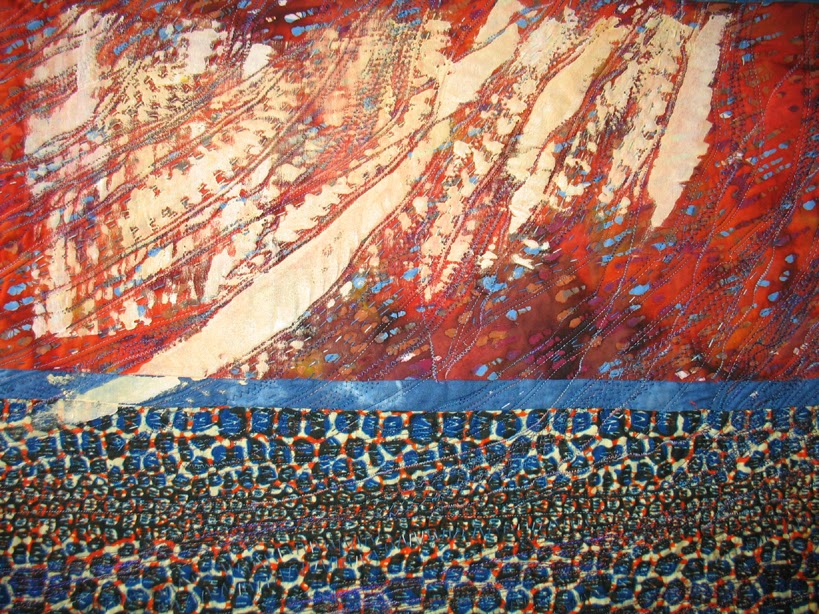 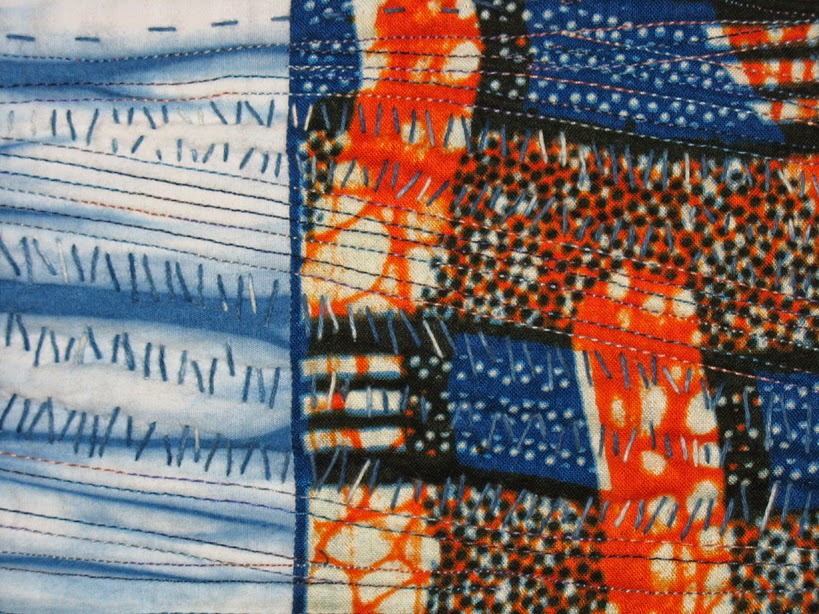 Detail before  and after painting 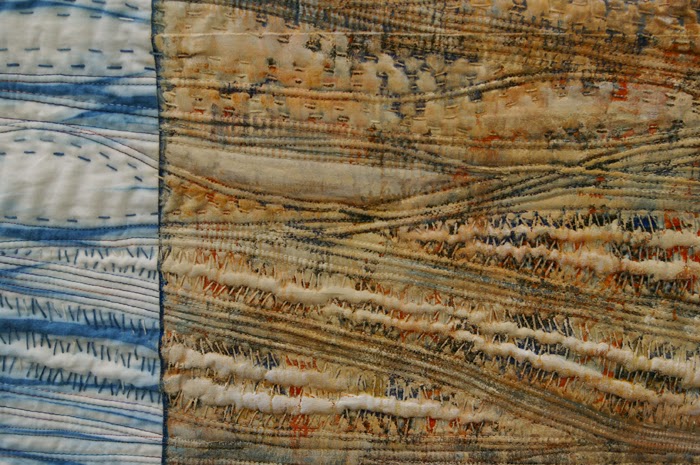 I sometimes find I have to make further samples to solve problems as I go along ,  in this case assembling off cuts.  These can  often result in interesting pieces in their own right. 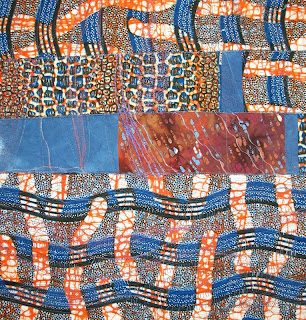 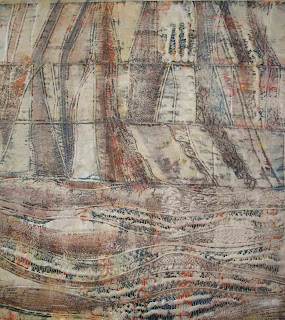 I was really pleased how  'Strindberg Shore' turned out, it's one of those pieces that rewards when you look closer. And I was thrilled when it was chosen to travel to National Quilt Museum Paducah as part of the 'acCent' exhibition highlighting UK Quilt artists in 2012- I was among some very prestigious  company.
A slight cautionary note. As fabric painted with acrylics becomes rather stiff, quilts have to be rolled for transit rather than folded. When it came back from being exhibited at Festival of Quilts in 2007 it had been folded resulting in  some fine vertical creases. I was lucky in that they eventually came out  but  the experience made me wary of sending quilts for exhibit where rolling could not be guaranteed. It's also the rather pragmatic reason behind the choice of  size and format of quilts that I make. ﻿
Posted by magsramsay at 12:00 AM