I just received word (today) that my piece--"Scorched Earth" (pictured below)--was juried into this year's Form, Not Function: Quilt Art at the Carnegie exhibit held at the Carnegie Center for Art & History in New Albany, IN, from July 21st through September 16th of this year.

I also have a piece called "Black Beauties" (pictured in my gallery on my blog) that was juried into an exhibit in Herndon, Virginia. That exhibit will be from July 7-July 23. 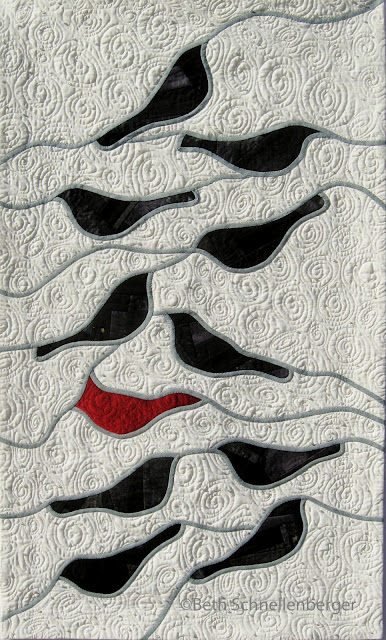 Story of the quilt--One of my favorite things to do when I'm home (besides working on my artwork) is looking at the view out my window into my backyard to watch the birds at my bird feeder. I particularly like to watch the birds in the wintertime when there is a nice sheet of snow on the ground. I like the stark contrast between the whiteness of the snow and the color of the birds. One particular winter day, ALL the birds on the ground were "those ugly" blackbirds EXCEPT for one beautiful red cardinal. I was really aggravated that the "ugly" blackbirds were dominating the bird feeders, eating up all my seed, and weren't even pretty to look at. After I had ranted and raved, I got to feeling bad about maligning the blackbirds. I realized that they need to eat too, and they can't help the fact that they aren't "pretty." That revelation led me to think about this on a larger scale. People who aren't considered "pretty" by society often have needs that aren't met--simply because of their appearance. We all can't be pretty. 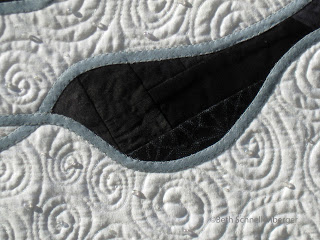 I'm still waiting to hear on whether one more gets in to another exhibit to which I've applied.
Beth

www.quilterbeth.blogspot.com
Posted by Beth at 1:00 AM