I have really enjoyed working with Judith's technique of the month--extreme texture. As I stated earlier, I started with a piece of fabric approximately 17" X 28". I put the hand-dyed gauze on top of the hand-dyed fabric and added the little stuffed balls first. (I like the added texture of the gauze.)

I have to apologize for the different colors that show up in these pictures. Some were taken during the daytime (when I had good light) and some were taken at night in much lower light. The last picture is the closest to the true colors of the piece. 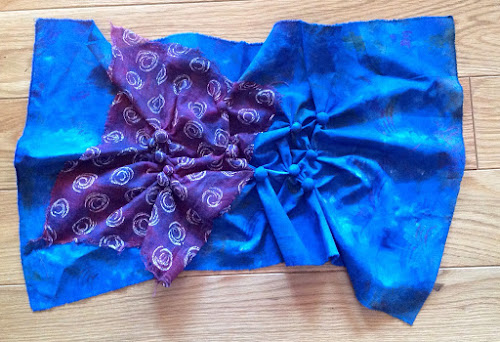 Next, I ironed wrinkles into the fabric and pinned them down. 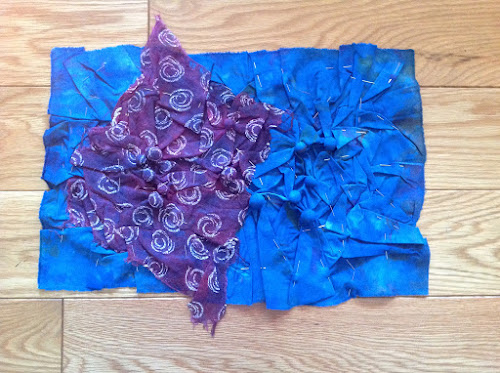 I looked through my threads and thought I'd free-motion quilt the piece with a pearlescent thread--BIG MISTAKE! I HATED the way it looked. 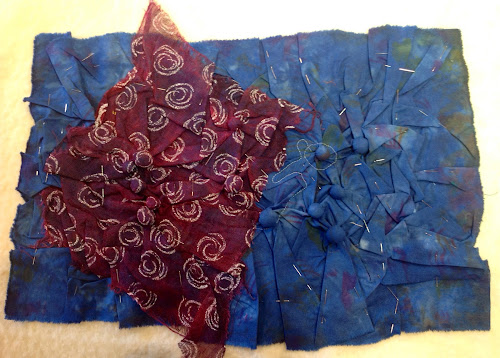 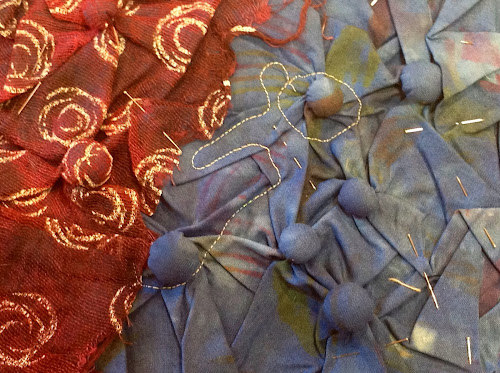 The above picture is a close up. That pearlescent thread just looked "nasty," so I had to rip it out--not fun.

I ended up using a purple thread on the blue fabric (which didn't show up as much and that I liked MUCH better) and quilted a spikey design. I used a yellow green on the dyed cheesecloth and quilted circles onto it. In the following picture, I have also added cording underneath the fabric. 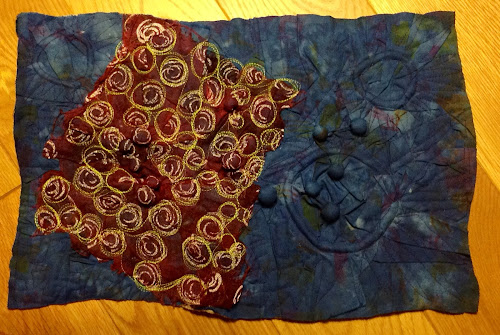 Then, I started adding some handwork. I added yellow green yoyos and put a sequin and bead in the center of each one along with some embroidery over the top, a black washer embroidered with a buttonhole stitch with a sequin and a bead added to the center, and some plastic gutter guard from Home Depot (I used the grid of the gutter guard to keep lines of embroidered running stitches straight.). The green "dots" on the blue background are French knots, I embroidered around the inside of each circle, and I couched down sari yarn which I ran from each "little puff" (as Judith calls them). When I was deciding where to couch the sari yarn, I thought about how each little puff was isolated; I wanted to connect them. I thought about how we all are connected in some way--six degrees of separation. 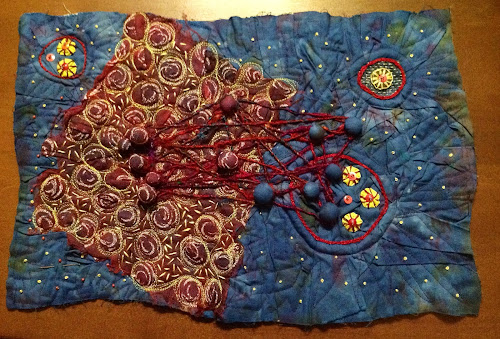 You may notice some reddish "dots" on the lower left-hand side; I'm beginning to add some beads. I plan on adding many more over the entire piece. I'm also planning on adding some bead stacks on the "little puffs." I already have the beads picked out. I don't think I'll get that finished before the month is up, though, so I thought I'd go ahead and post.

Posted with Blogsy
Posted by Quilter Beth at 10:35 PM