“COLOUR IS MY DAY-LONG OBSESSION, JOY AND TORMENT” Claude Monet
I know that this is a technique-oriented blog but in my eyes, any technique is as good as usable it is. And theory can give a foundation to technique – to use it more consciously. So In September I would like to make a series of theoretical inputs and connect them with exercises. I taught workshops on design principles where we also explored the principle elements of design.
There is not even a complete consensus on the principle elements of design but I consider 5 of them to be the basics: the line, the mark, the form and the space, the texture and the colour.
Colour is the most complex of them. Most of us handle it intuitively but I found that people appreciated to KNOW why and how colour works – so I choosed it as the topic of this month.
As I said I will make short theoretical introductions and give some exercises to try out. They will be rather short ones concentrating on the learning effect. So if any of you would like to do them and would send me the results, I would love to show them on the blog afterwards.
OK, let’s get started!
We perceive the lights reflected from the surface of the object as colour. Colours that seem to be similar have nearly the same wavelengths. The perception takes places in the mind, so there is an immense “individual” aspect in it.
Each colour can be manipulated either by colour mixing or, more subtly, by altering the context in which they appear. And this latter one, the context, is which I would like to examine carefully.

There are three fundamental factors to specify colours: hue, value and saturation.
The hue is defined by the wavelength and generally referred as “colours” like green, red, blue, etc. The conventional 12-colored wheel shows the three primary hues: red, blue, yellow, the secondaries (always a mixture of two primaries): orange, green, purple and the tertiaries (mixture of adjoining primaries and secondaries). Different hues can be reached by colour mixing.  This is the part, which I’m NOT going to discuss this month. 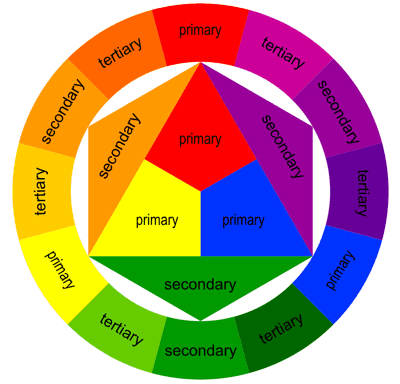 But these hues, I’ll refer them as colours from now on, can elicit different sensations in different contexts:

These are the questions I’ll try to answer during the next few days.
Posted by beata at 2:00 AM

Email ThisBlogThis!Share to TwitterShare to FacebookShare to Pinterest
Labels: colour