I was finding it hard to use some of the shibori fabric I've made, and finally came up with a design that I think shows it off. This is a simple piece with 2 1/2 leaves on it, measuring about 36" wide and 42" long, quilted with a simple design of lines on the green background. 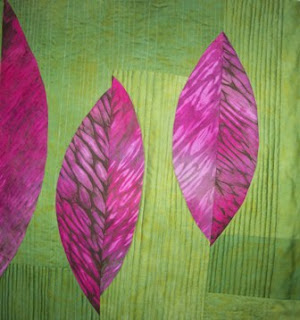 The green fabric is sateen that I dyed using some avacado colored dye. It has a nap to it, and I deliberately placed some of it going one way and some the other, giving the color difference shown. 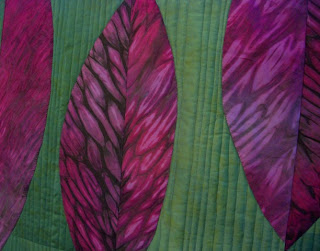 I'm still quilting some of the individual lines on the leaves using both brown and pink thread. Good way to spend the day today, inside in the AC instead of out in my 120+ degree garage doing monoprinting or dyeing.
Posted by Laura at 11:55 AM 6 comments:

ANOTHER monoprint technique to try.

Cheryl, also known as Muppin, restarted her Technique of the Week on her blog.  This week she played with a Gelli Arts gel printing plate and highly recommends it.  It does sound much easier than actually making, storing, cleaning, etc a gelatin plate and I like the monoprints she produced using it.
Posted by Quilt or Dye at 10:15 AM 3 comments:

Email ThisBlogThis!Share to TwitterShare to FacebookShare to Pinterest
Labels: monoprinting

I finally had a chance to get to some monoprinting. This is a really fun technique to do. I spent the afternoon playing--it really is like finger painting for adults!﻿
I used textile paints on a large piece of plexiglass to do these pieces. After each piece was monoprinted (except the pink one), I mixed a little paint with an extender to make the color very transparent and scraped color across the fabrics using an old credit card. I like the finish that gives to the pieces.
This is a large piece which started off as an unsuccessful pink shibori that I did early on in this adventure. First--I don't really like pink; second--the shibori didn't really show up. I figured...what do I have to lose! In the upper left-hand corner, I put down some paints and swirled a round sponge in them to make the circles. In the upper right-hand corner, I put a vegetable bag (looked like a grid) under the fabric and rolled some left-over paint on it with a sponge roller. (I'm not sure why only the vertical stripes came through.) I then put the cloth over some leftover paint on the plexiglass (after misting it with water) and used a brayer to take up the last of the paint. The bottom left is just paint on the plexiglass, and I used a brayer on the back of the fabric to transfer the paint. On the right, I painted a piece of bubble wrap (bubble wrap with squares rather than circles) and placed the fabric down onto that.
This is a piece of an old tablecloth. I used some metallic textile paints on the plexiglass sheet along with some "regular" paint. After that, I used the vegetable bag and the sponge roller to make the vertical lines.
I love orange and red, so I used those colors for this piece. The circles were made by putting a metal kitchen utensil into the paint and swirling the colors. I'd like it better if the red wasn't so "blobby." I really like the top of the piece.
I did the top and bottom of this piece separately. For the top I just swirled my fingers in the paint. For the bottom, I misted some of the leftover paints that were on the plexiglass from other prints and swirled the round sponge in it. I like the transparent effect this gives.
I had this leftover piece of black fabric and thought I'd try some metallic paints on it. I used a paintbrush to put the paint on the outside edge. I like that look and wish I had done more with that.
These last pieces were some that I had previously used to try some techniques--unsuccessfully, I might add. Some of those previous techniques include--using inks on fabric, screenprinting, and marbling. I think they look like drop-cloths--clean-up rags.

By this time you should have finished your layer on the first batch of fabric, mailed it off, and received the second batch of fabric.  I know Karen finished a layer and has a new piece to work on because she posted it on her blog.   I do feel safe in posting one picture here because Karen sent it to me.  It is a progress picture. Check out the technique and finished layer here. 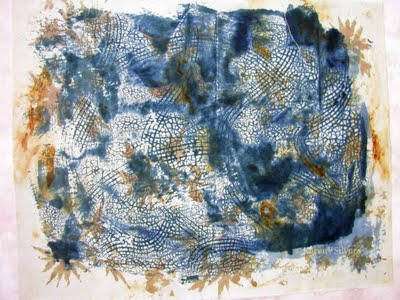 There were four of us yesterday at the Five play date. The thing that really interested me is that while we were all doing monoprinting, we were doing different types of things.

I used a piece of stiff sheet of acetate (I think it is acetate but it is the stuff you buy at quilt shops to cut out templates or cut for stencils, do you know what I mean?).  I used multiple colors of fabric paint, fabric printing ink, and FW Inks thickened with base extender.  I applied them by dotting them onto the sheet and then spreading with a sponge breyer.   I used some weeds from the yard to act as a resist and laid them on top of the paint.  I then layered mystery fabic--not cotton but maybe rayon--on top of the paint/leaves.

To make my direct print I pressed the fabric either with my hands or with another breyer so that the paint printed on the fabric.  My second print or shadow print was made by removing the weeds and placing a second piece of fabric on the acetate sheet.  The paint left under the plants then printed onto the fabric.  My third print was made by placing the paint covered weeds onto a third piece of fabric and pressing so the paint on the plants transfered to the fabric.  I made a 4th print by spraying my acetate sheet with water to wet the remaining paint so it would transfer.  Beth has posted that picture.

Here are some of the monoprints we did at the monthly meeting of the FIVE. I only have about half of the photos and Judith has the other half so check the set it on fire blob. Here are the pictures I took of my work 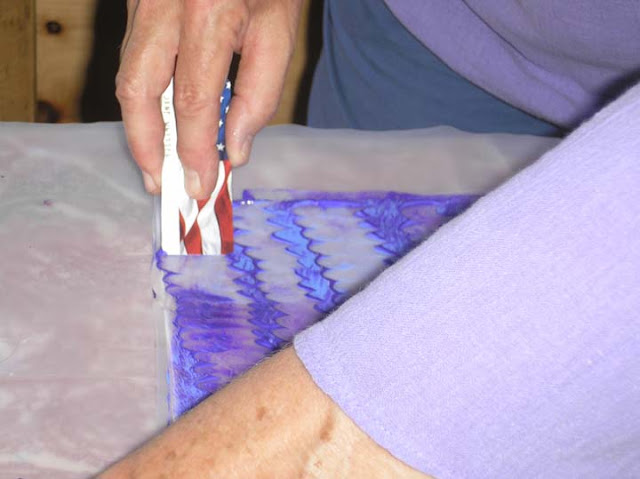 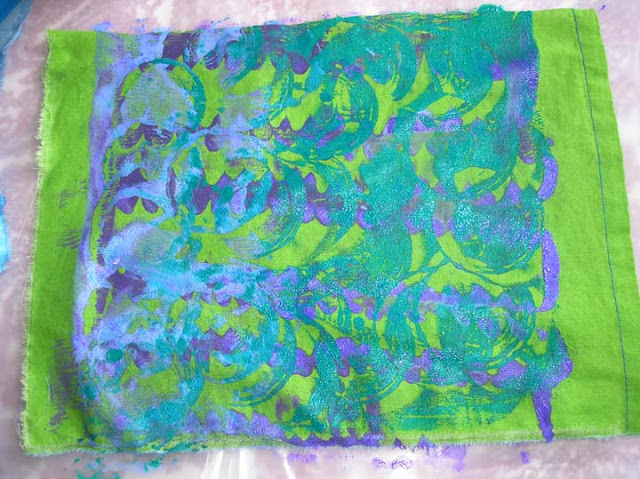 Here is the photo of ONE of Judith's amazing SERIES of monoprints. 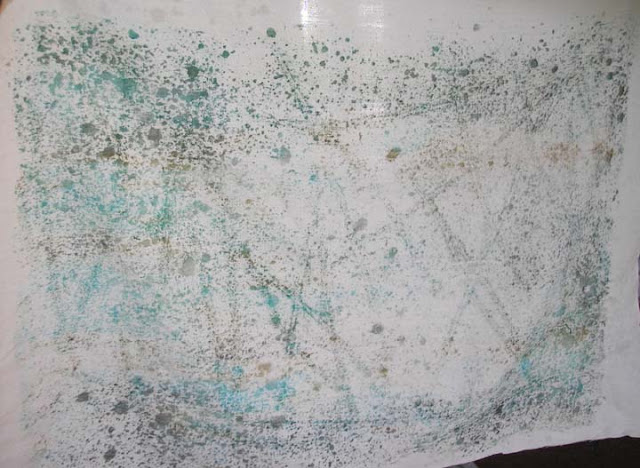 And here are the photos of Charlene's pieces. She was an art teacher her entire professional life and is a wonderful surface designer. She is also NOT a computer person so I am posting her pieces.
I will also start with a series of photos that her making a print. 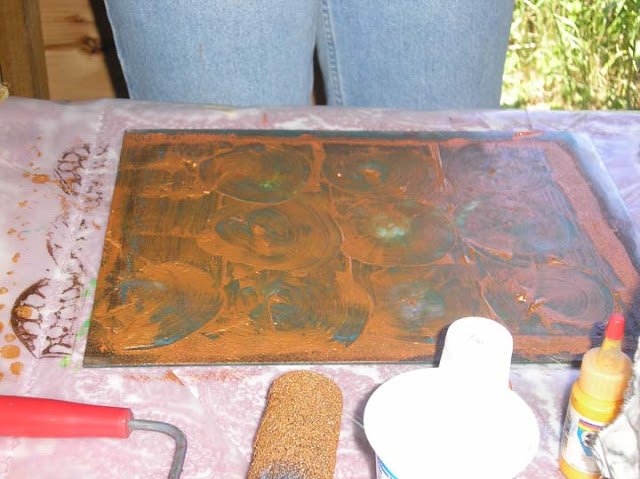 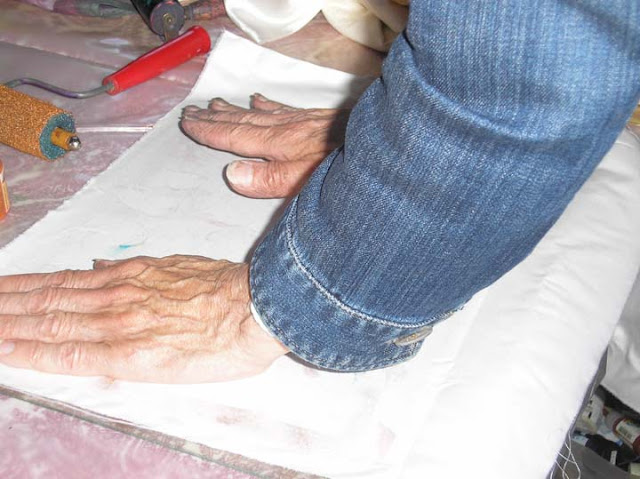 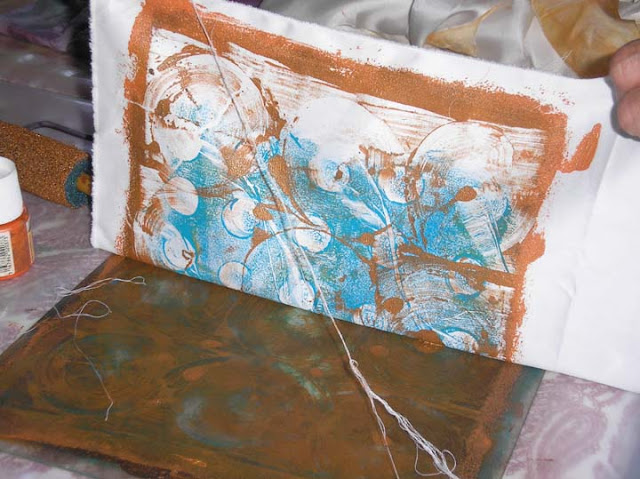 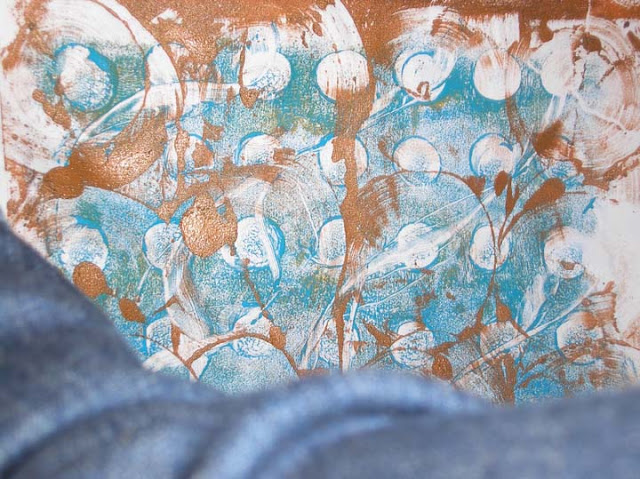 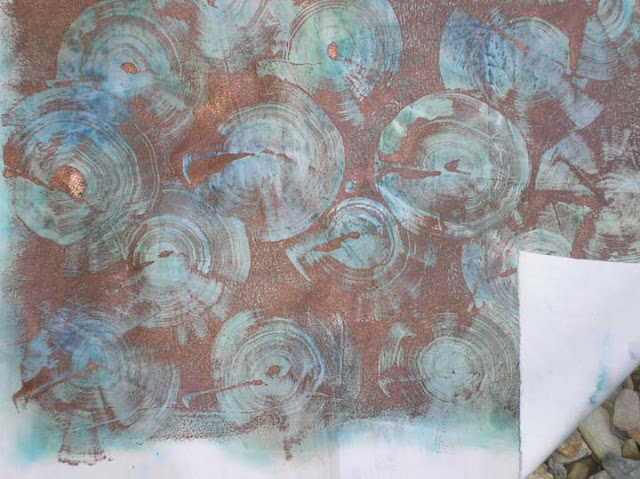 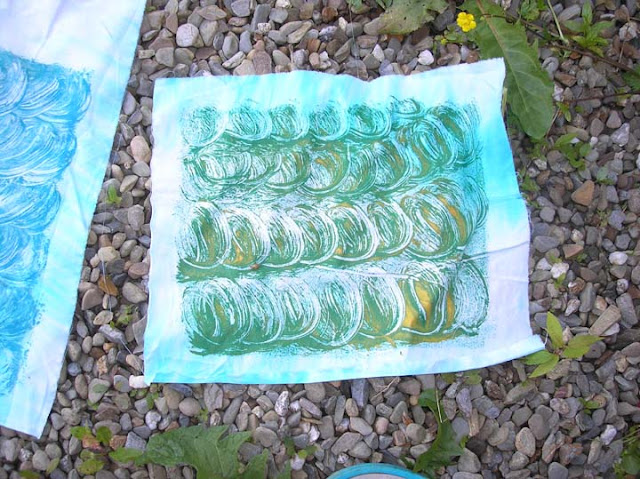 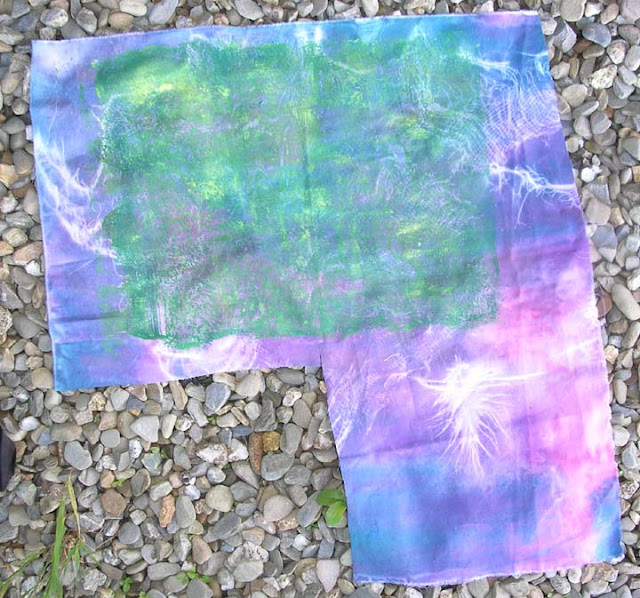 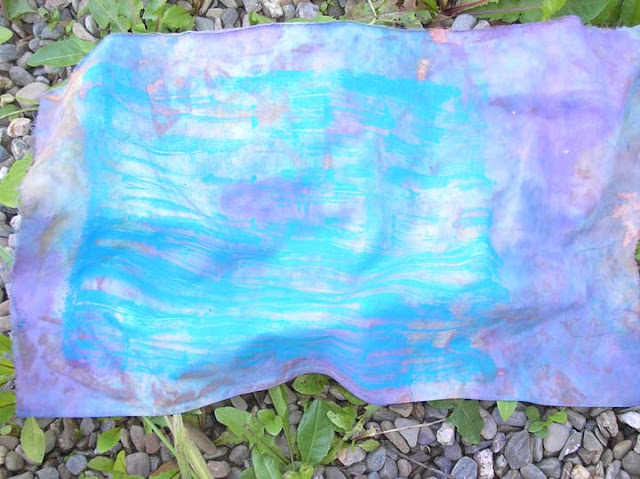 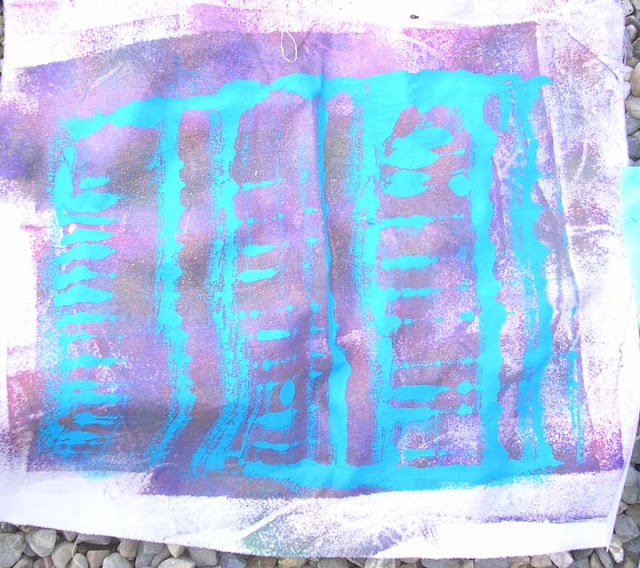 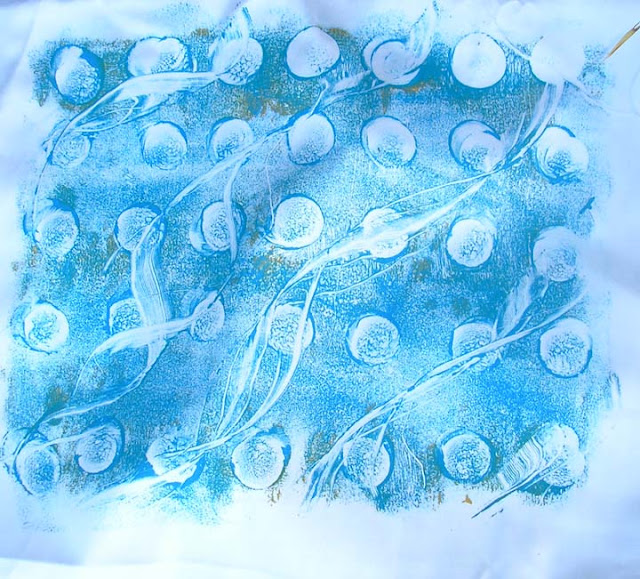 And these are SOME of the beads made and the beads on the knitting needles which really didn't come out very clearly - bad lighting and bad focus.